Why Interpol Is Over the Hill

The sound of a band with no future. 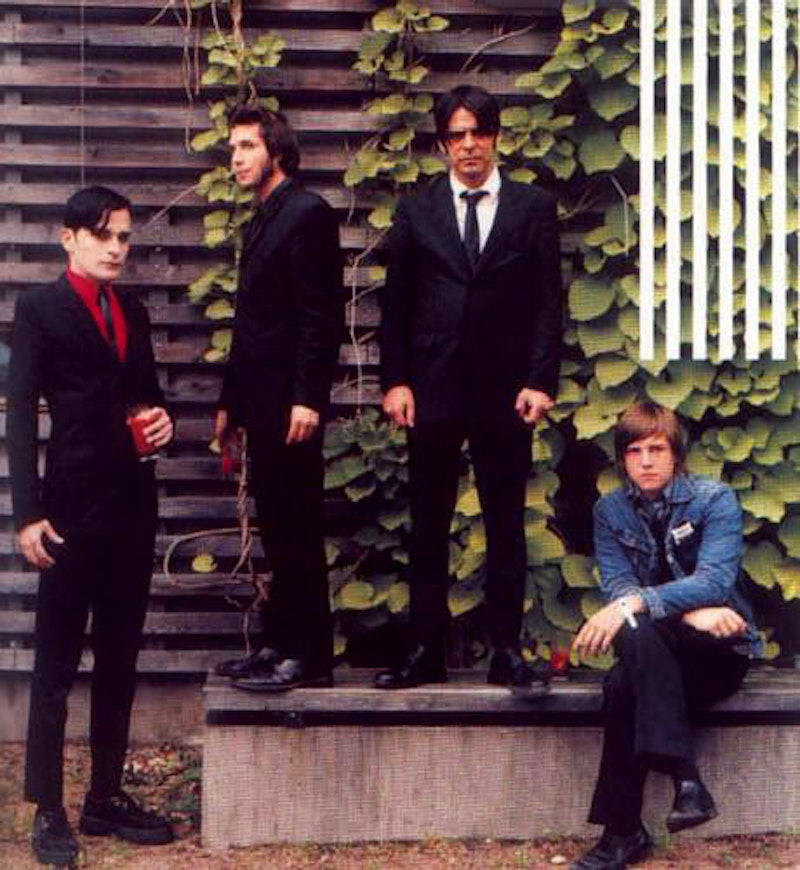 Interpol before the wave broke

Interpol’s latest record just makes me sad. Not the good kind of sad that this band used to excel at; no, Interpol's fourth album, a self-titled effort, is depressing in an entirely non-pleasurable way. It encapsulates everything that has kept Interpol from not only surpassing but even just matching the quality of their first two albums (2002's Turn on the Bright Lights and 2004's Antics). Freshly jettisoned from major label Capitol after 2007's turgid Our Love to Admire, the band realized that a simplification of their brand was necessary: hence the eponymous title, monochromatic artwork, and a more conciliatory tone in interviews. Though they've massaged the ephemera that surrounds the band, a core problem remains: lazy, uninspired lyricism and songwriting.

Those first two records are classics. The level of songwriting and the well-developed, distinct aesthetic present on both was unparalleled at the time and still is, at least among bands of their ilk. At their best, Interpol was transporting and cinematic, creating a sound that was far grander than any of the post punk bands they still get compared to. Their superb songwriting elevated them from criticisms of Paul Banks' lyrics and gossip about former bassist Carlos Dengler's nightlife, and earned them a grudging respect from the press.

It's no wonder critics, who once kissed the band’s feet, have largely abandoned Interpol. Music criticism is rife with personal politics but, ultimately, if a band is making great, exciting music, most things can be forgiven. Unfortunately, this is not the case here. On Interpol, Banks and lead guitarist Daniel Kessler recycle riffs and motifs from past work, creating an odd Frankenstein of an album made up of familiar sounds. For a band that has prided itself on iconoclasm, innovation and progression, Interpol is a stagnant effort, a hollow statement. To call it an echo of Bright Lights would be forgiving. This is the sound of a band with no pulse or spark.

Adding to that, Kessler shows a startling lack of musical growth, technically and creatively. Not only content to reuse chords and melodic progressions, Kessler's playing has reached a technical nadir: it’s stilted, wooden, sophomoric. Not minimalist in a positive sense; it's simple and basic. Songs like "Lights" and "Safe Without" are driven by staccato riffs that would've been discarded or at least expanded on by more competent musicians. As far as the atmospherics and textures much touted by the band go, they're anonymous and forgettable. I was going to say electronics aren't their forte, but I'm not sure what this band's forte is anymore. Just like Our Love, the production is overly trebly and thin, as if tailor-made, just like their Prada suits, for the radio. The bass is ill-defined and murky, the drums lack punch, and all the studio trickery (pitch-shifted and echoed vocal overdubs, stock synthesizer sounds, and a vague digital shimmer and feel) feels gratuitous.

Banks's lyrics have always been polarizing, but here they're just boring. The imagery, rhythm, and cadence of classics like "Evil," "PDA" and "Leif Erikson" is lost to duds like "Starts to feel like a barricade, to keep us away, to keep us away / and it kinda does" from "Barricade" and "And it pains me to say / and I do what I can / that's the man I am" from "Always Malaise (The Man I Am)." The suave, occasionally slovenly, but infinitely cool Banks of 2004 is gone, replaced by a neutered misanthrope. The sartorial gentleman known as Paul Banks has since been replaced by an effete manwhore content to date super-models and whine about it. Banks is still talking about girls, but on Interpol, it's a language that's alienating, bland, and often impenetrable.

Interpol is in a creative stasis, recycling of old ideas in place of non-existent new ones. "Success" and "Summer Well" are great songs, flickering signs that the Interpol of six years ago still walks. The rest of the record, however, sucks. No wonder Dengler left; easily the most talented member of the group musically, he must've recognized that he couldn't have carved new ground in this band anymore. Whether it's reluctance to change, creative inflexibility, or simply a lack of ideas, Interpol is the sound of caution, trepidation, of nowhere to go.