You May As Well Quit Resisting Boyhood

Quit your whining and buy a ticket already. 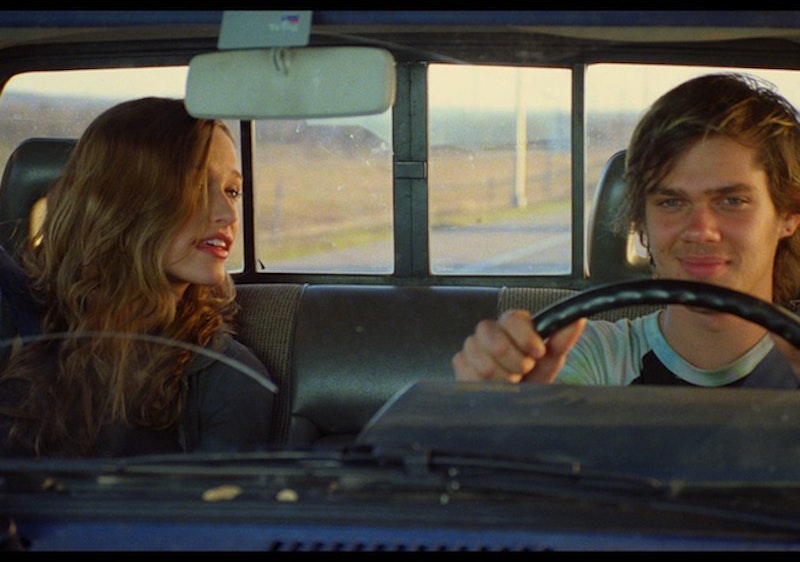 There’s a moment early on in Boyhood where a young Mason (Ellar Coltrane) arrives, book bag-free, at a new elementary or middle school. He enters a classroom, finds a seat, and is greeted by a new teacher, who assigns the kid next to him to show him around before instructing the class to make him feel welcome. The kid next to Ellar leans in, snickering and grinning, and mutters, “Welcome to the suck.” Ellar then relaxes, grinning back.

Oh, Boyhood. There was a little part of me that wanted you to suck, and suck hard, to put the lie to the small cottage-industry of fawning interviews, interview features, reviews, and think-pieces that have emerged in the wake of director Richard Linklater’s most recent and unconventional feature film. That little part of me wanted to embrace the growing backlash, the bitter pills of product placements, the kneejerk suspicion anything so unforgivingly positive. But fuck all that—some things aren’t worth arguing over or resisting. Just go see it. Even if you hate the movie, you’ll find something in it to consider.

By now, you know what the deal is: Linklater convened Coltrane and the rest of the cast every year for a dozen or so summers, so as the narrative streams forward, everyone ages before your eyes, the effect being that with each new growth-spurt or ill-advised coif of Coltrane’s, the next chapter announces itself. Some of these chapters are deeply prosaic, and others are more meaningful in a potentially traumatic way, but there’s a strong truthfulness to the whole, even if the foibles, confrontations, and mini-adventures don’t appear to intuitively hold a mirror to the viewer’s own personal experiences.

The truth, available to us all if we can but remember, is that being a kid is the suck. To be a kid is to have the very real sense of life being out of one’s own control. In Boyhood, that helplessness is felt acutely, and the audience is held in the dualistic roles of voyeur and captive. At times it feels like an extended hang out or a flashback from a therapist’s session, but given that Boyhood covers patches of Mason’s life from the ages of seven through 18, those hovering in their early 30s and older may find it more resonant than anyone else.

As Mason, Coltrane is a strikingly mild presence, bright eyes—I broke out laughing when Mason exulted that his college-roommate-to-be was a fellow Bright Eyes fan—lanky frame, and easily led, up to a point. You see him spray-paint the underside of a bridge as a kid, with no sense that it might mean anything. You watch him suffer the rages of parents and step-parents, watch him get indifferently fucked up at what might or might not be an absurdly young age, watch his relationship with his older sister Samantha (Lorelei Linklater) evolve from adversarial to companionable, watch his fumble towards a semblance of personal identity.

More interesting, in a way, are the paths Mason’s parents take in parallel to him. Both Olivia (Patricia Arquette) and Mason Sr. (Ethan Hawke) are damaged and hapless at the outset, separated kids themselves who became parents too young and haven’t let go of the anger surrounding their split. “Your mother… is a piece of work,” Mason Sr. snaps at Mason and Samantha in an early scene, an edge in his voice; by late in the movie, when Mason makes an offhand reference to his mother’s horrible taste in husbands, Mason Sr. refuses to take the bait, drawing his fingers across his lips like a zipper. The first comment was the wrong one and the second one was the right one, but the interval between the two was where Mason Sr. himself grew up—from a shiftless fuck-up Wooderson with musical aspirations rolling a black GTO to a remarried actuary rolling a minivan and raising a third kid. Olivia, for her part, bounces her family around Texas through two disastrous marriages and into a psychology professorship; by most estimates, she comes through everything okay, but her final scene is a potboiler of sadness, resentment, and frustration that’s endemic of how differently we process and interpret life.

Linklater directs in long, sleepy tracking shots that drink in raw, natural Texas landscapes, picayune institutional interiors, tense evening standoffs outside of homes where you believe these characters and their loved ones would actually live. He clearly isn’t above paralleling. Boyhood opens with Samantha torturing Mason with an artless rendition of Britney Spears’ “Oops…I Did It Again,” and much later, Samantha is charmed when the daughter of a family friend performs a similarly vapid pop single at a dinner table. He catalogues perceived disappointments: Samantha’s huffy moods whenever a move or life change occurs and Olivia’s unhinged counter-reactions, Mason’s depression when he finds out that his dad sold the GTO he’d forgotten that he’s promised to leave to Mason.

Hawke’s expressions during an extended, uncomfortable stretch where he has “the talk” with Mason and Samantha are priceless. In a lot of ways, he steals the film with a verve and buoyancy that’s irresistible to behold, swearing and badgering and generally being the cool, daring dad we all wish we had and maybe want to be—the swaggering, beating heart of a movie about how exhausting it can be to become the person you’re meant to be. By the end of Boyhood, we think we know who Mason is, but we’re not sure; the credits roll before we see him reach the age his parents were when they conceived him. We’ll never know who he ultimately is, or exactly how or where his experiences will leave him, but in trying to complete his puzzle, we're afforded some space to ponder our own paths.