Thoughts on Get On Up, Tate Taylor’s James Brown biopic. 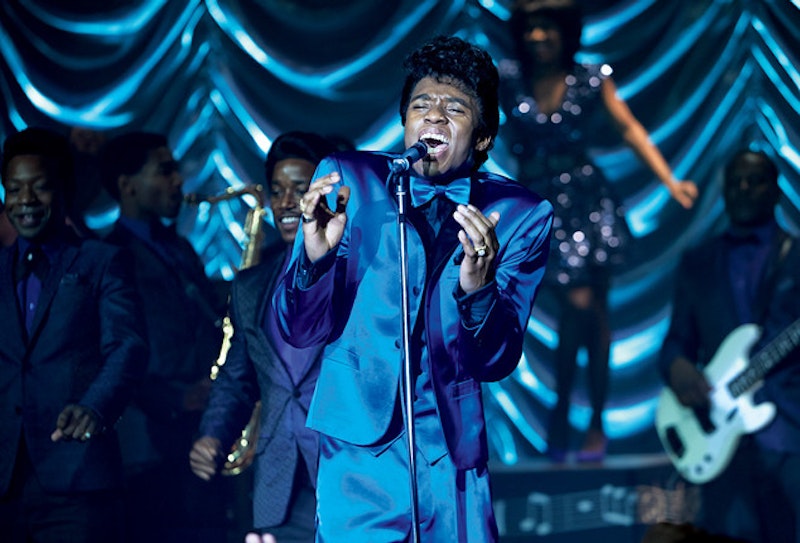 James Brown (Chadwick Boseman) and Ben Bart (Dan Ackroyd) sit down to talk at a restaurant somewhere in the American South. Brown is a soul singer climbing the rungs of stardom, while Bart is the president of a talent agency that represents Brown. They’re talking business. A sly Brown—hedging with an admission that his education never got past a seventh-grade level—wonders aloud why he and Bart shouldn’t bypass the traditional machinery for concert promotion, thereby pocketing more of the resulting earnings.

Sputtering and stammering as if choking, Bart blusters into a variegated sports analogy, suggesting that what Brown proposes is immoral, unnatural, and impossible; the camera is positioned behind Bart’s shoulder, and Brown smiles directly at us, shaking his shaggy head. He ignores Bart’s protestations, leading the camera into a shack for a plate of fried fish and through a series of amusingly dramatized ways to accomplish exactly what he’s proposed to Bart.

The Brown biopic Get On Up is at its second-best in these fourth-wall-breaking scenes, when director Tate Taylor flips the bird at traditional slow-burn narrative, trailing a preening, coiled Boseman—whose Godfather of Soul impression is so dead-on that it’s almost unnerving—as he struts arrogantly through concert venues, franchises with his name on them, and the Johnson White House, projecting a supreme gospel-of-self directly into a theatre near you: a pop-cultural hurricane powered by balls-out badassery and an unflagging self-belief. Get On Up is at its absolute best when Boseman figuratively wrecks stage after stage, with the actor portraying his sidemen: the immaculate poise, the slicing footwork, the exacting, almost dictatorial musical cues.

During these impeccably lit and orchestrated scenes, what we’re watching explodes into a sort of sham concert film, an effect that effectively wallpapers over the movie’s knee-jerk biopic dross, the director’s distracting flashbacks to Brown’s desolate youth, and flashes of the adult Brown’s more unsavory characteristics (drug abuse, domestic battery, being a domineering, spotlight-hogging dick). Faced with loads of backstory and the star’s estate breathing down his neck, Taylor plays Get On Up like a cardsharp, shuffling back and forth madly in time, striking origin-story keys without ever building up a full head of steam. As viscerally satisfying as most of this can feel, it’s less a coherent accounting of an exceptional life than it is a simulated experience of chilling with the late Brown at a remove—and given the scope, breadth, and influence of Taylor’s subject, a minutiae-stuffed HBO mini-series might have been a more fitting treatment.