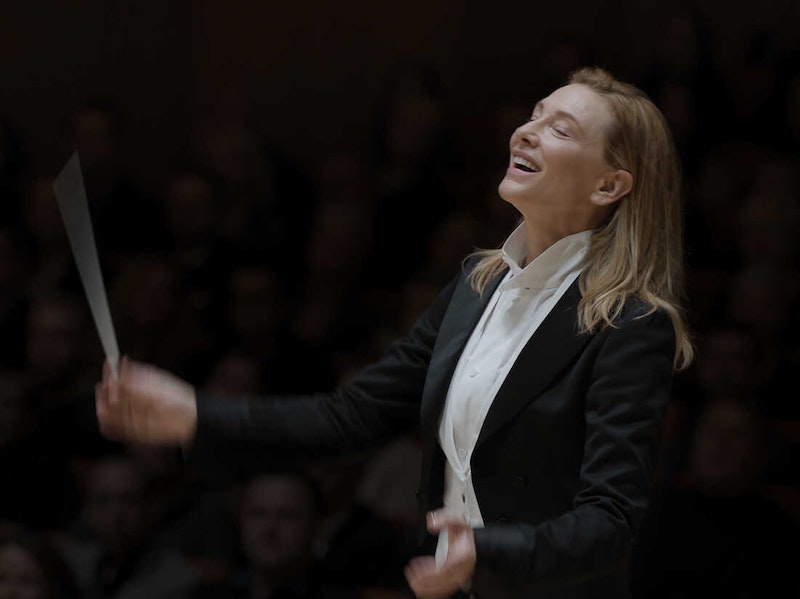 Todd Field has had such a strange career: after making his debut as an actor (or background singer) in Woody Allen’s 1987 masterpiece Radio Days, he continued to work steadily until appearing in another masterpiece, Stanley Kubrick’s Eyes Wide Shut, in 1999. He had a small but memorable role as Nick Nightingale, the pianist friend of Tom Cruise’s character who reluctantly invites him to that oh so very exclusive masquerade. Two years later, he debuted at Sundance as a writer, director, and producer of In the Bedroom, a great drama that was successful and acclaimed at the time, but inexplicably forgotten, like Field’s 2006 follow-up Little Children. Both received Oscar nominations in major categories—how could their director be best known as Nick Nightingale?

Tár, starring Cate Blanchett, is Field’s first feature since Little Children in 2006; he ruefully told The New York Times that the absurd gap in his career was because he, “set his sights very high on things that probably can’t get made.” After adapting Jonathan Franzen’s 2015 novel Purity, Field was close to going into production on a mini-series in 2016 before everything fell apart. Both of his previous films came from stories and novels, while Tár is his first wholly original screenplay. The difference is obvious: all three films are handsomely directed, with a precise and keen eye for images and montage that elevate otherwise middling book adaptations into proper movies. In the Bedroom is neat and finely-handed while 2016’s similar Manchester by the Sea is more alive, but messier and at times hysterical.

Field’s touch is ice cold, and unlike the fathers, sons, mothers and enemies of the Northeast or Middle America, the world of Tár is a perfect match on paper: whereas Field’s particularly severe direction is more noticeable in his previous two films, here it’s part and parcel with Blanchett’s Lydia Tár, the titular composer who’s about to launch a book, perform Mahler’s Fifth Symphony, and have her life destroyed by “accusations,” which the film never specifies. Blanchett’s is a powerhouse performance, one the Academy can’t resist, and while an early scene at Juilliard promises a much better movie, Tár is underwritten and underdeveloped. Unfortunately, it’s also one of the aesthetic triumphs of the year, an enormously cold and antiseptic film that uses the medium to make the audience as stressed, confused, and scared as Lydia.

In a pan that earned him the ire of Gawker and the love of Twitter for about 36 hours, Richard Brody wrote, “Tár is a regressive film that takes bitter aim at so-called cancel culture and lampoons so-called identity politics. It presents Lydia as an artist who fails to separate her private life from her professional one, who allows her sexual desires and personal relationships to influence her artistic judgment—which is, in turn, confirmed and even improved under that influence.”

Isn’t that often the case, though? Lydia herself says as much for Mahler and Bach. Brody’s writing is above pretending that “so-called identity politics” don’t exist as portrayed in the film. As far as work that deals with #MeToo, this is a proper film rather than a filmed illustration of half a dozen magazine pieces, like the upcoming She Said, whose trailer played before the screening of Tár that I saw.

Field’s first original feature screenplay is on the nose and blunt past that first Juilliard scene, and while it completely conveys Lydia’s loneliness in a cold aesthetic Hell, she isn’t tortured like the similarly antiseptic Geraldine Page in Woody Allen’s Interiors. For a woman who calls herself “a U-Haul lesbian,” and accused of so many things that are always about to be elaborated but never are, Tár is uniquely sexless, only haunted by fragmented, only semi-erotic nightmares.

I don’t agree with Brody that, “The film looks at any social station and way of life besides the money-padded and the pristinely luxurious as cruddy, filthy, pathetic,” but it does indeed present Lydia’s unseen accusers as “hysterical,” an impressive achievement given they’re barely spoken of in depth and known only obliquely through bits of old, “desperate” emails. As for “her daily aesthetic,” well, I’m not sure if he means her clothes or her attitude.

He continues, “By eliminating the accusations, Field shows which narrative he finds significant enough to put onscreen. By filtering Lydia’s cinematic subjectivity to include disturbing dreams but not disturbing memories, he shows what aspect of her character truly interests him. By allowing her past to be defined by her résumé, he shows that he, too, is wowed by it and has little interest in seeing past it.”

On the contrary, it’s Tár’s inaccessibility that makes the film work, however flawed. It makes it clear that this is a rich but enormously lonely life, one of an artist who speaks of Mahler’s passion for his Alma while living and moving through homes and hallways that more and more look like morgues rather than museums.

Field’s screenplay is undercooked enough to give credence to critics who say that Tár is another aggrieved white male movie, perhaps even a piece of post-Trump resentment. Narrowing the film’s perspective so much would’ve worked if Field had more to fill in. His films are wonderful shapes, and there’s enough material here for two hours, but not nearly three. The ending is very funny but it could’ve been a killer if the film were better paced and more lively. The problem with Tár isn’t its “regressive aesthetic,” it’s an artist as multi-talented as Field dropping the ball on a major component of the film. It’s all form and too little content.