Desolation in The House on Telegraph Hill 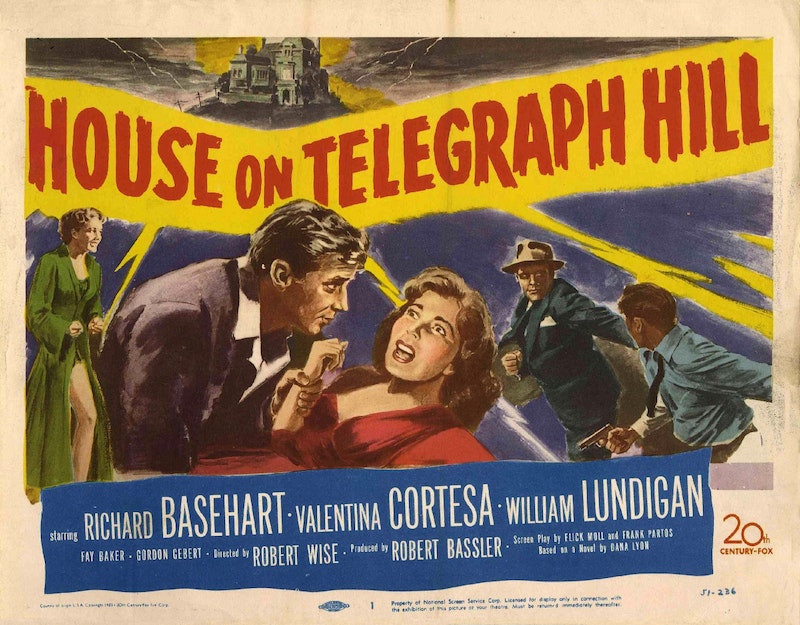 Viktoria Kowalska found herself at the crossroads. She’d survived the Nazi concentration camp, and now that the camp has been liberated by the Americans, she became a displaced person. Her husband and her entire family were dead, and she had dreams of coming to America. This dream was fueled by a friendship with another woman—Karin Dernakova—who shared Viktoria’s misery and suffering in the camp.

Karin gave up her son when he was an infant to live with wealthy relatives in America, and hoped that she too would make it there. But Karin’s life took a different turn. Before she could realize her dream, she died in the camp, right before the liberation. Not knowing what life might bring, Viktoria made a decision: she’d take on Karin’s identity and papers, and head to America. Thus began Viktoria’s journey into darkness that nearly killed her.

Such is the premise of Robert Wise’s 1951 film, The House on Telegraph Hill, a noir thriller that keeps one guessing until the very end. The juxtaposition of real life, painful events, (the Holocaust) and thriller may seem unlikely (especially since it was made only six years after the end of World War II) but the film doesn’t trivialize this time in history.

Italian actress Valentina Cortese (famous for her superb performance as the acting diva in François Truffaut’s 1973 Day for Night) plays Viktoria/Karin and brings forth a woman morally conflicted. She’s both the victim and the fraud, and all of this is weighing on her conscience. Richard Basehart plays Alan Spender, a relative by marriage of Aunt Sophie (real Karin’s wealthy aunt) and a sole guardian of Karin’s son, Christopher.

When Viktoria/Karin gets in contact with him, Alan’s skeptical about her identity. After all, he has no way of verifying whether Viktoria/Karin is telling the truth. Eventually, he accepts her and the two get married. “Karin” is reunited with her son, who obviously has no idea that this isn’t his real mother.

Aunt Sophie has died and now the sole heir is Christopher. It appears that everyone in the house on San Francisco’s Telegraph Hill is interested in one thing only: the inheritance. “Karin” seems to want to live an orderly life, without fuss, but her conscience is telling her otherwise. She’s always walking on egg shells around the old and imposing house. The presence of Aunt Sophie’s spirit is palpable, yet not malevolent. (The film has gothic elements similar to those in Alfred Hitchcock’s 1940 Rebecca.) Yet “Karin” can’t shake off the feeling that something’s terribly wrong.

The idyllic life in the house is broken quickly by several events and people. Margaret, who’s acted as Christopher’s caretaker all these years, is suspicious of “Karin.” The family album seems to be holding many secrets, if only “Karin” can steal Margaret’s key to open it. The playhouse, which is next to the main house, is falling apart and the reason why it burned is a mystery neither Alan nor Margaret are willing to share. Someone has leaked the brake fluid in “Karin’s” car and she nearly dies in a car accident. Suddenly, the manipulator becomes the victim, and the tension has shifted.

There is, however, one friend that “Karin” can rely on—Major Marc Bennett—Alan’s longtime friend, and a man who handled “Karin’s” papers after the camp was liberated. It’s he who accepts “Karin” even after her admission of identity theft, it’s he who genuinely loves her, and it’s he who helps her move away from Alan’s evil clutches.

The House on Telegraph Hill breaks away from the predictable script. Where we might’ve suspected that Viktoria’s true identity will be revealed, the plot turns things upside down, and the perpetrator turns out to be Alan. While Viktoria’s constantly terrified she might be found out, the direction of the film continuously suggests something else.

Although the house has qualities that inspire fear and uneasiness, it’s not Daphne du Maurier’s Manderley. It’s devoid of supernatural elements, and instead, it’s the human heart that’s stained with shades of black. No one is entirely free of guilt, yet Viktoria’s conscience dictates the action of the film. The more she deliberates and reflects on her decision to steal Karin’s identity, the more she becomes suspicious of Alan’s intentions. Unlike Alan, Viktoria’s willing to accept the consequences of her action. She wants to be free of guilt and the prison she’s made for herself.

What makes The House on Telegraph Hill fascinating and unique is its juxtaposition between noir and World War II. The war and genocide is simply a fact of life. People are dealing with “nerves” and “nervous disorders” almost casually, yet realistically. There’s no endless rumination or analysis, and the acceptance of suffering is another fact of life. In this sense, we see a level of freedom that’s unknown to the idea of man that was born in the 1960s and continued to develop along the lines of inward analysis.

In addition, the characters aren’t two-dimensional. Guilt, deceit, and goodness have different shades of existence, yet there’s a clear-cut acknowledgement of what’s good and evil. There’s an understanding that there will be consequences for not taking ethics seriously, and everyone must live with those consequences. It’s the only way out of the alienation. Perhaps man never truly recovered from the nightmare of World War II, and we’ve been living out those consequences ever since.