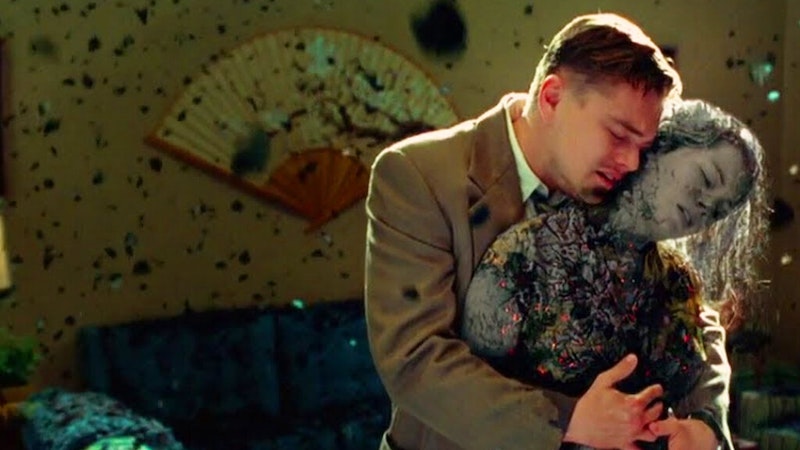 Midway through Martin Scorsese’s Shutter Island, US Marshal Teddy Daniels (Leonardo DiCaprio) scales the side of a cliff, believing his partner (Mark Ruffalo) has fallen to his death. When he reaches the rocks below, the partner is nowhere to be found. He spots a fire coming from a small cave, which he manages to reascend to despite torrential rainfall. Taking shelter in the cave, he finds Rachel Solando (Patricia Clarkson), the escaped inmate from the titular asylum, a filicidal mother whom Teddy has been brought to the island to search for. Solando claims she never had children; rather, she was a nurse at the asylum who objected to its experiments on human subjects, and she’s been held captive ever since.

Everything Rachel says confirms Teddy’s paranoia: that the doctors in the asylum are practicing mind control, implanting memories in unwitting subjects; that protests to these practices are met with systematic gaslighting and, in some cases, lobotomies, which are carried out in the island’s lighthouse; that these experiments are a continuation of North Korean and Nazi human experiments; that Teddy’s increasing hallucinations and migraines are the result of intentional poisoning and psychological torture by the asylum’s staff; that everyone on the island is in on the conspiracy; that he knows too much, which means they’ll never let him leave.

The film’s twist is that Teddy Daniels is actually Andrew Laeddis (anagram of Edward Daniels), an inmate committed to Shutter Island after killing his filicidal wife, Dolores Chanal (anagram of Rachel Solando, played by Michelle Williams). Teddy’s convinced that his wife died in a fire started by a pyromaniac named Andrew Laeddis, and the search for Rachel Solando is an elaborate charade meant to draw Teddy out of the fantasy world he has created and confront reality. Dr. John Cawley (Ben Kingsley), the lead psychiatrist and the charade’s architect, claims Andrew has been an inmate on the island for two years, and that his continued refusal to accept what he did will eventually require psychosurgical intervention. While he initially accepts the doctor’s version of events, the ending appears to depict him slipping back into fantasy—insisting he needs to escape the island and expose its experiments. The film closes on the lighthouse, implying Andrew’s self-delusional behavior has finally landed him in the lobotomy seat.

But is he actually crazy? The traditional reading suggests that the Rachel Solando he meets in the cave is just another hallucination, but Laeta Kalogridis’ script (based on Dennis Lehane’s novel) offers some possible hints to the contrary. For instance, the anagram explanation only makes sense if one accepts that his name was originally Laeddis, a surname which reads much more like someone attempting an anagram than an actual name—implying that Teddy Daniels was the original personality. There’s also the ominous note inmate Bridget Kearns (Robin Bartlett) slips to Teddy early in the film that simply reads, “Run.” And what about George Noyce (Jackie Earle Haley), a socialist who was released from Shutter Island only to kill mere weeks after his release?

Noyce is the real reason Teddy claims to be investigating Shutter Island. He plans to gather enough evidence to expose their experiments once and for all. Noyce’s accusations have some disconcerting real-life parallels, particularly the CIA’s MKUltra experiments that began in 1953 (the year before the film’s set). Noyce’s seemingly random and spontaneous murders contain echoes of what Tom O’Neill theorized in his excellent Chaos: Charles Manson, the CIA, and the Secret History of the Sixties: that one of MKUltra’s many goals was to hypnotize subjects into acts of violence they’d subsequently have no memory of committing (Sirhan Sirhan, Robert Kennedy’s alleged assassin, has been the subject of decades-long speculation in this regard). O’Neill presents a compelling argument that the Manson family murders might’ve been the result of an MKUltra experiment, including evidence of Manson and his disciples frequenting a San Francisco clinic run by the MKUltra psychiatrist/elephant killer Louis “Jolly” West.

West is just one shady CIA-funded psychiatrist that may have served as possible inspiration for Dr. Cawley (others include psychological torture expert Donald Ewen Cameron and Carl Pfeiffer, who famously administered LSD to Whitey Bulger in prison). “What do intelligence agencies want to consult a psychiatrist about?” Teddy asks early in the film. It’s a good question. Considering the asylum is located in a Civil War-era army barracks, run by uniformed men driving around in army Jeeps, and funded by the House Un-American Activities Committee, the exact nature of the facility–medical, military, intelligence, or some combination of the three–is never clear.

Despite Dr. Cawley’s insistence that his methods are intended to alleviate the pain of mental illness, touring the facility with Teddy—especially Ward C, a medieval dungeon for the most psychopathic offenders—feels like getting lost a house of pain, one that bleeds seamlessly into flashbacks of liberating the Dachau concentration camp. Like most WWII vets, Nazis are a sore subject for Teddy, as he makes clear in his testy interactions with Dr. Naehring (Max von Sydow), a likely ex-Nazi now employed at Shutter Island (possibly inspired by Walter Schreiber, a former Generalarzt who experimented on human subjects during the Holocaust, brought to the US via Operation Paperclip).

Naehring and Cawley aren’t the only fictional stand-ins for real people. Hallucination or not, Rachel Solando’s account of being driven crazy after objecting to human experiments closely mirrors the story of US Army biochemist Frank Olson. The official story is that Olson jumped from a window after being dosed with LSD, a narrative Olson’s family has long disputed. The more accepted version of events, detailed in Errol Morris’ Wormwood, is that Olson had decided to blow the whistle on the CIA’s biological warfare and torture programs, was taken to a cabin under the pretense of a CIA retreat, dosed with LSD, interrogated to see if he was still a reliable asset, and when it was determined that he wasn’t, he was murdered. Do Shutter Island’s potential whistleblowers meet similar fates?

It’s worth noting that not everything squares with the Chaos-pilled reading. For example, if Teddy’s right about his past—that his wife was killed in an apartment fire—then why is the fire starter’s name an anagram of his own? If Teddy’s a US Marshal, why does he struggle to recall the chain of command? And how does one account for Teddy’s aversion to water, if not the trauma of discovering his wife has drowned their children? While Shutter Island draws from enough of our unsavory Cold War activities to cast doubt on the standard “Teddy is Andrew” reading, the film’s genius is its noncommittal to any definitive version of events, creating just enough wiggle room between the standard and paranoid explanations to scrutinize ad infinitum. Almost every action and line of dialogue—from the opening boat ride to Teddy’s final line (“Which would be worse: To live as a monster, or to die as a good man?”)—is subject to these dual interpretations, and the ambiguous ending only adds to the ultimate uncertainty, resulting in a cinematic experience roughly equivalent to paranoid schizophrenia.

What is Shutter Island? A cinematic plunge into schizophrenia? A litmus test for one’s openness to conspiracy theory and distrust of authority? Is it a psy-op itself, meant to dismiss real concerns about our government’s secret activities as the rantings of a lunatic? I suspect the answer lies somewhere in that lighthouse, luring in skeptics, cynics, and conspiracy theorists like a moth to a flame.