Jessica Chastain is fine, but Eddie Redmayne is a disaster in this utterly dysfunctional film. 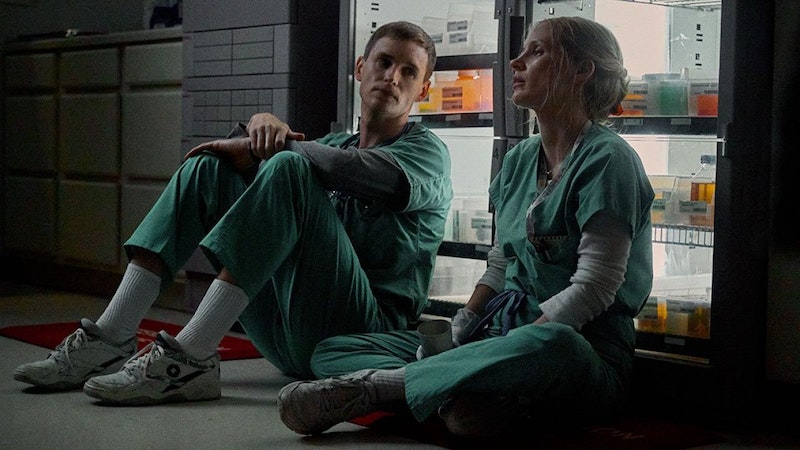 A lot of people love to tune into Netflix for true crime, whether it's documentaries or dramatized versions of just about every high-profile murder, serial killer, or major financial malfeasance case of the last 30 or 40 years. Most recently, they streamed a show about Jeffrey Dahmer that set viewership records. The Good Nurse, which played at the Toronto International Film Festival in September and hits Netflix this week after a brief theatrical run, dramatizes a real case about Charles Cullen, a male nurse who killed dozens of patients between the late-1980s and early-2000s.

It's one of the worst true crime dramatizations I’ve seen. Not for the usual reasons, of being exploitative, overlong, or getting the facts wrong. It's just really boring. Directed by Tobias Lindholm, The Good Nurse is unbearably slow, badly photographed, underlit, dramatically inert, and plagued by a mediocre performance by an actor who's the wrong choice to play a serial killer.

The nurse is Amy (Jessica Chastain), a single mom with a heart condition who has to keep working, against medical recommendation, to keep her family's health insurance. Soon, Charlie Cullen (Eddie Redmayne) arrives at her hospital, and appears to be a kindly friend, quick with encouragement and offers to babysit her kids.

It soon becomes clear that Charlie’s poisoning patients to death through their IV drips, was doing so at several previous spots, and that a combination of incompetence and active coverups have kept him free and able to keep killing. Noah Emmerich and NFL cornerback-turned-actor Nnamdi Asomugha play cops looking into the case, while Deadwood veteran Kim Dickens plays a hospital administrator with sinister motives.

The dramatic tension is meant to come from Amy losing faith in her friend, the investigation's noose tightening around Cullen, and building rage at a medical bureaucracy that failed to notice for more than a decade that Cullen was leaving mysterious deaths everywhere he went. But none of it works. The pace is too slow, as if the filmmakers knew they only had about 40 minutes of plot but had to stretch it out to two hours. It’s drably and indifferently shot.

Chastain’s fine, although this won’t be remembered as one of the recent Oscar winner’s more notable roles. But the worst part of the film is Redmayne's performance, which is subdued almost to a fault. Cullen's exact motives remain a mystery, but the actor does nothing with the assignment. If we’re not given so much as a clue as to his motive, it gets to the point where there’s not really anything interesting about him.