Rollerball (1975) is the only colossal failure among recent Criterion Channel sci-fi programming. 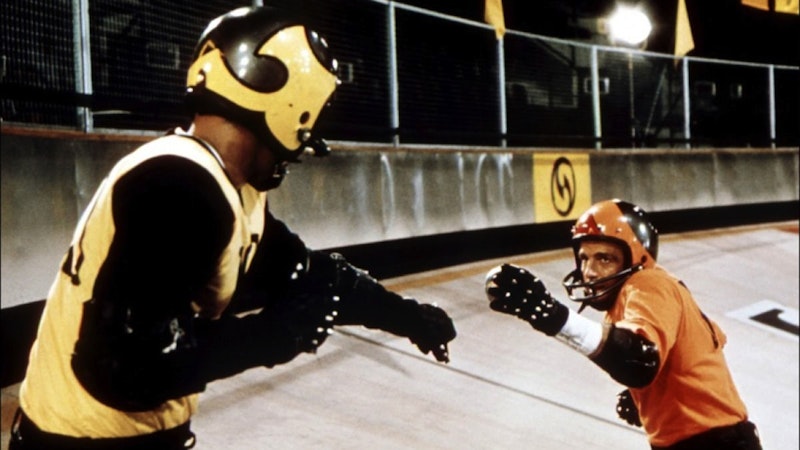 There were 18 films in the 70s science-fiction collection the Criterion Channel streamed in January (17 of which were available to me in Canada). Most of those movies knew what they wanted to do and, to a greater or lesser degree, did so. Only one of them was a total and colossal misfire.

Norman Jewison’s Rollerball was made in 1975 from a script by William Harrison, adapting Harrison’s short story “Roller Ball Murder.” It imagines a 21st century in which a violent contact sport, rollerball, has become the number-one spectator pastime around the globe. Players routinely die during the games, but this gets across the message the world-dominating corporate powers want: individuals don’t matter, only the team, and any given person is a replaceable cog in a machine.

But one player, Jonathan E. (James Caan) has emerged as a superstar, a Wayne Gretzky or Michael Jordan for rollerball. The suits, led by the owner of his team (John Houseman) put pressure on him to retire. When that fails, they start changing the rules, with fatal results. The best things about the movie are the scenes of the rollerball matches. They’re fast, kinetic, and brutal. The sense of the game comes through—a kind of roller derby with some of the players on motorcycles, and a basket into which the teams try to throw a ball to score points. These extended sequences work because of the violence and the danger. Because we see fatalities, and are enthralled as we are in a good action movie.

This isn’t a good action movie, though. It’s not just a question of there being too few rollerball sequences, or of the stuff between the games being poor. Both are true, but the problem is that Jewison thought he was making a film opposed to violence in entertainment.

He failed. During shooting, cast and stunt performers played pick-up games of rollerball. After the film came out, Jewison was appalled when sports promoters tried to buy the rights to the game from him, wanting to stage rollerball tournaments of their own. He didn’t realize that his film was effectively an extended commercial for the sport.

There isn’t much else of interest in the film, in terms of plot or character. The acting’s bland; Caan underplays Jonathan to the point he appears to sleepwalk through his scenes. None of the other actors do anything interesting or surprising, whether Houseman as the evil executive, John Beck as Jonathan’s best friend, or Maud Adams as Jonathan’s ex-wife.

Only Ralph Richardson, in an extended cameo, brings a bit of life to the proceedings as a futuristic librarian. Books, we learn, have all been digitized at one central location where one central computer can access them. Except that the computer’s prone to losing things, like the whole of the 13th century. It’s a cute bit, but makes no sense. Computers don’t work that way. Books don’t work that way.

Acting aside, the world’s incoherent, meaning the characters are incoherent because they’re not the product of an understandable environment. Jonathan goes to a library, only to find out all the books in the entire world are apparently in Geneva. He wants books to find out about the corporate wars that established the powers who set up the game of rollerball. These wars are within living memory, but somehow everybody’s forgotten about them and nobody’s noticed you can’t get books about them.

It’s the film’s conceit that rollerball pacifies billions, but also that Jonathan’s individual brilliance can turn it into a revolutionary movement. This is difficult to believe, and the film doesn’t convince us. The idea that the villainous executives are unable to force Jonathan into retirement is also unbelievable; it shouldn’t be difficult for a group with global resources to come up with blackmail material, or simply arrange an unfortunate accident away from the rink.

What’s moderately interesting about the film is the mid-1970s view of professional sport. Players taking control of their careers and salaries would’ve been relatively new. Events like the Super Bowl did not have the media presence they do now. In that sense, the movie’s extrapolating from what was going on around it, and is talking about star athletes in a way that’s become an everyday reality.

In particular, it’s worth noting that Jewison, a Canadian, created a movie about a violent contact sport where play-by-play men greet goals with the cry of “He shoots—he scores!” It’s hard not to see a bit of the NHL in Rollerball. Canadians have a largely unfounded belief that hockey rewards a kind of virtue, based on toughness and team play and just the right flavor of rule-breaking mixed with honor. It’s bullshit, but you can see the movie leaning into that mythology.

Notably, Jonathan’s never gratuitously violent though he plays a violent game. There’s something dishonest in that, something conflicted in the movie’s presentation of rollerball as a sport. If the violence in rollerball is so bad, which is Jewison’s argument, shouldn’t Jonathan be a bad person? Shouldn’t we see rollerball fans being violent?

In fact the film never actually shows the sport as a bad influence. We therefore have no reason to believe it is. We see a group of rich decadent aristocrats aimlessly burning trees, but (leaving aside the fact that as a sign of decadence this is pretty small beer) there’s no sign the decadence was caused by any fascination with the sport and not simply by their wealth.

It’s of a piece with the movie’s basic confusion about what it’s doing. Jewison doesn’t think deeply enough about why violence is entertaining, and how to critique it on screen. There’s a lack of thought overall that’s fatal. Supposedly, somebody asked James Caan what Rollerball was about, and he said, “It’s about ninety minutes.” Rollerball is 125 minutes long. Nobody making it grasped what it was about.