The series is a cult favorite for devotees of the ever-evolving Marvel Universe. 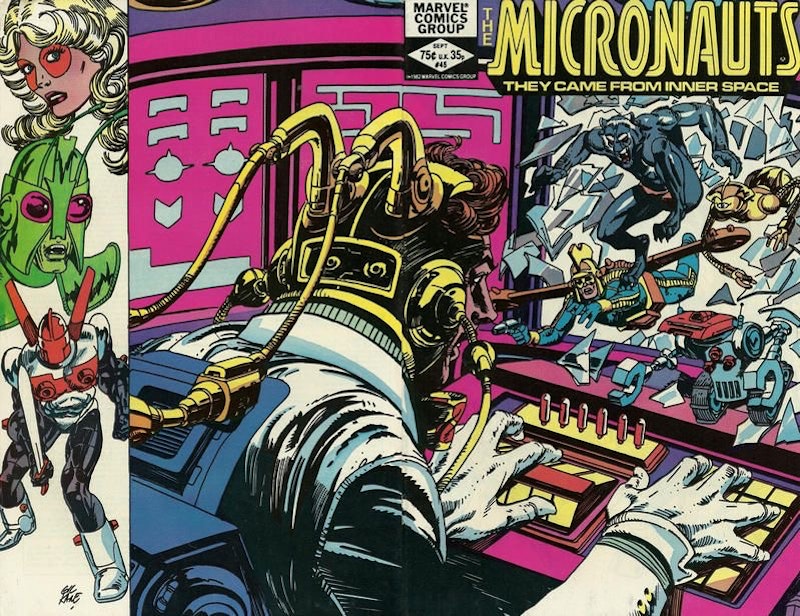 Marvel Comics’ The Micronauts was an amazing series which starred an eponymously named team of tiny multi-colored creatures capable of mystifying feats. At the time of their 1970s debut The Micronauts’ contemporaries were square-jawed Supermen, vivacious Wonder Women, and masked acrobats. Bug, Microtron, Princess Mari (aka Marionette), Commander Arcturus Rann, Prince Acroyear, the fuchsialycanthropean Devil, and the rest of The Micronauts looked more like outrageous aliens than defenders of truth and justice. Originally created as a marketing tie-in for a line of Mego brand toys, the series quickly became a cult favorite for devotees of complex science fiction and the ever-evolving Marvel Universe.

The Micronauts came from the Inner Space planet of Homeworld, part of a Lilliputlian helix-like cluster called The Microverse. Homeworld was constantly at war with itself and its neighbors and this conflict gave Micronauts writer/co-creator Bill Mantlo plenty of chances to explore the socio-political dynamism of worlds within worlds and the impact of things that are physically far away from Earth yet symbiotically tied to it. The dramatic contrast of The Marvel Universe's well-defined reality and the playful weirdness of The Microverse gave these comics a tension rarely found in any other series.

Now Hollywood has finally come to Homeworld. J.J. Abrams' Bad Robot production company is bankrolling a Micronauts adaptation by writer/director Dean DeBlois (How To Tame Your Dragon). Martin Scorsese unleashed 2019’s ultimate OK, Boomer embarrassment with an anti-Marvel movie op-ed in The New York Times. Superhero films are today’s pop mythology and part of a special cult of fandom that has become a 21st-century hallmark. When claiming that Marvel films are “not cinema” Scorsese may as well have said that the gargoyles on DC's National Cathedral aren’t sculptures. I do have some qualms with superhero films and I hope that their most annoying elements won’t ruin this new Micronauts picture.

The following will make The Micronauts movie into more than just a predictable genre entry:

—NO CGI MONSTERS/HUMANOIDS/ROBOTS/BACKDROPS: The major problem I have with post-1980s superhero films and TV shows is not the approach to story telling, but the lack of balance in images of fantasy and reality. The Micronauts comics contained the perfect blend and will be lost if the film features the excessive CGI that’s ruined so many superhero films. The Spider Man, Fantastic Four, X-Men, and Avengers franchises all stay interesting by having relatable stories and characters. It won’t be a total disaster to go with a standard Marvel script, but the fatal flaw of overwrought CGI detail workwill never replace the dynamism of primal comic book iconography.

—CELL ANIMATION/MATTES/GREEN SCREENS: Of the many Marvel films I won't ever care about, perhaps the one that disappoints me the most is Guardians Of The Galaxy. These characters stand right next to The Micronauts as some of the finest creations ever to come from The House Of Ideas. Yet glossy special effects turned what could've been an enduring cult classic into just another formulaic pile of clichés (though GOTG did have an awesome 70s rock soundtrack). Instead of relying on scientifically correct space-scapes a la Guardians, a few shots of un-reality that’ll electrify the Micronauts picture would be grainy cell-style animation projected onto green screens, zip-a-tone matte paintings, and modified Christmas lights standing in for the nebulous locations of The Solar System, Homeworld, and The Microverse.

—MINIATURES/FOAM RUBBER/PLASTIC/ETC.: The original Micronauts comics were drawn by several artists who shared tripped-out styles that remain as strange now as they were back in the 70s and 80s. Michael Golden, Jackson Guice, Gil Kane, Steve Ditko, Pat Broderick, Howard Chaykin, and Al Milgrom were just several of the genius illustrators that gave The Micronauts their special animated clunkiness, a quality that must’ve been inspired by the fact that these characters were children's toys before they were ever anything else. Lumpy foam rubber costumes, gaudy leotards, and absurd Nerf-like weapons will bring the blazing spectacle of the comics to life. Using plastic/toy material to craft miniature versions of the series’ space ships, computers, and robots will also be essential for long shots. Gerry & Sylvia Anderson's classic TV productions and Japanese kaiju films provide the best template for this latter element.

—GIGANTIC PRATFALLS: A major strong point of the original Micronauts series was its slapstick comedy scenes inspired by the main characters' size. In Micronauts Annual no. 2 the crew destroys merchandise in the big NYC Macy's location after the store shelves become battlegrounds when a group of toy Micronauts there are brought to life as robotic foot soldiers employed by the mad genius Toymaster. In another third-wall bashing confrontation with Micronauts toys, Micronauts no. 39 shows them trashing a comic book/hobby shop shortly before co-creator Bill Mantlo shows up for an autograph signing. For the best way to reproduce these madcap incidents check Irwin Allen’s TV show "Land Of The Giants", the closest cinematic counterpart for The Micronauts’ run-ins with gargantuan furniture, mammoth household items, and colossal stairways.

—COMPLEX CHARACTER DEVELOPMENT/PLOTS: The chintzy $2 special effects will only have an impact if they're used in the most complex story that a scriptwriter can dream up. The Micronauts are comics' ultimate outsiders. They're dwarfed physically and conceptually by Earth's superheroes and villains, so even when their Microversal tragedies spill over into Earth’s realm they’re often ignored. Treachery, family drama, sexual politics, pollution, megalomania, intolerance, conformity—name any big headache affecting Earth and there's a Micronauts story that reflects it. The Micronauts individually are bold characters with quirks and traits that cause friction within and outside of their tight-knit social circle. As long as this mesh of interpersonal conflict and political intrigue is set in an insane candy-colored mise-en-scene The Micronauts film will revolutionize superhero cinema.