A Rock Comedy-Drama About a Long-Ago Britain 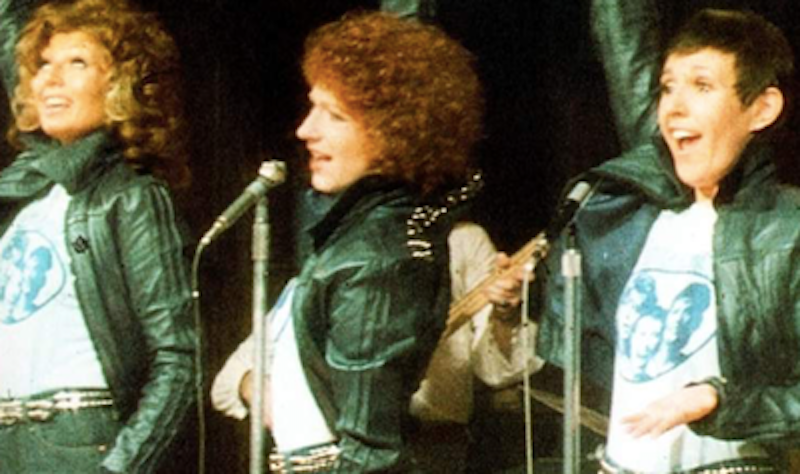 An English suburban lady sits at a table with some equally English types. The lady’s a soul-sucking monster of gentility; she lives for putting people in the wrong. Her companions are a crew of shaggy, good-hearted working-class leftists, none of them too bright. The lady’s daughter is about to perform on stage; the lefties are commune mates to another of the performers. A game radical tries to make conversation. “We were just down the march,” he offers. The lady considers this. “I’m afraid I don’t get out much these days,” she says. “You see, my husband has passed away.” A silence follows. “I’m sorry,” the radical says. The lady inclines her head. “You couldn’t have known,” she tells him.

You get it, right? The radical was saying sorry for her loss, not for his goof. Because he hadn’t goofed. He hadn’t brought up her husband; she had. Having done so, the lady waited; then her trap sprang shut. The Brits say Americans don’t get subtlety. Well, an American wrote this scene. Howard Schuman, a New York Jew, wound up in England and began writing for TV. This was decades ago, when David Bowie and Led Zeppelin were the big new things. And it’s back then that Schuman wrote the twin jewels of his career.

These are Rock Follies, British TV’s surprise hit of 1976, and its sequel, Rock Follies of 1977. Together they make up a 10-hour social comedy. It’s about Britain’s bedraggled post-1960s existence, and a post-Beatles music business that tries to chase trends but keeps hyperventilating and falling over. This TV mini-epic brought together Mrs. Teacup and the ding-dong communards (how they love devising bylaws!). More importantly, it brought together the Little Ladies. Up on stage is the lady’s daughter, Anna (Charlotte Cornwell). Anna sings alongsidethe radicals’ commune mate, Dee (Julie Covington), and with them is Q (Rula Lenska). This singing trio is out to conquer pop music, which in 1976 appears to mean rock. “Rock has the energy, the power, the money,” says their manager and would-be Svengali, the white-suited and floppy-hatted Derek (Emlyn Price). Neurotic Anna, with the dread mother and a Cambridge degree, wants to leave rep theater and live a little. Q, a statuesque chanteuse down on her luck, wants to get out of nudie films and make some money. Dee, a skinny working-class Julie Andrews, just wants a channel for her boundless pep. Rock is where the actress, the chanteuse, and the dynamo all end up together. By the time the show is done, we’ll see who belongs there.

The three leads are splendid and the supporting cast generally comes through; consider Vivienne Burgess as Anna’s mother, and Stephen Moore as Anna’s thoroughly dejected boyfriend. But the actors for two key roles seem underpowered: that’s Price as Derek, and Beth Porter as an American music hustler. Michael Shannon, as Q’s surfer boyfriend (“Hey man, you’re smudging my olive oil”), provides a special case. He’s one of the few Americans to do a bad American accent; on the other hand, what an accent it is. Sets and costumes are sometimes so low-budget that they shock, but the direction is often resourceful. The programs’ real weak spot is the music. The songs (lyrics by Schuman, music by Roxy Music’s Andy McKay) seem like jangly pop played fast to pass as rock. Worse, the women’s voices don’t blend. All seem high, and they produce a sound that doubles the jangly pop instead of offsetting it. The numbers take up a lot of airtime, too much. Their few rewards include a song called “Glen Miller Is Missing,” with the line “There’s a hole in the sky where his plane used to fly.”

The epic’s strength is character and incident. We have a horrendously visionary British-Greek tycoon who lives in a wing chair, a beefy Scottish club owner who’s a walking shrine to Roy Rogers, a drug-infused journalist who can’t finish his piece on Women in Rock, and Anna’s depressed lit instructor of a boyfriend, who’s slumped behind his mustache until she leaves him and he moves in at the commune. The lit instructor brings on strife when he beguiles a faction with Melville, Hemingway, and other non-members of society’s vanguard. (Irate leftist diehard: “When I was 12, I was reading V. I. Lenin’s Bourgeois Individualism as Infantile Disorder under the covers with a torch!” Lit instructor: “You’re an extraordinary fellow.”) The tycoon showcases the girls (now called the Victory Gals) at the Blitz, a hot-new-thing nightclub where the food duplicates rations from World War II. He figures there’ll be a trend for Austerity Rock, meaning Britain’s 1940s reheated. But his plans go wrong.

About when Rock Follies of 1977 went on the air, the big new thing hit at last. It was nothing like Follies. Well, it was a bit absurd, and it was very British but not entirely, and it was gifted with a good sense of life’s comedy-drama. But musically punk was nothing like Follies, which hadn’t seen it coming at all. For me that makes the show even more precious. Post-Beatles and pre-punk, embodied in a social satire and comedy of manners, the British music world of 40-some years ago gazes back at us. The place is a mess, but boy is it alive.