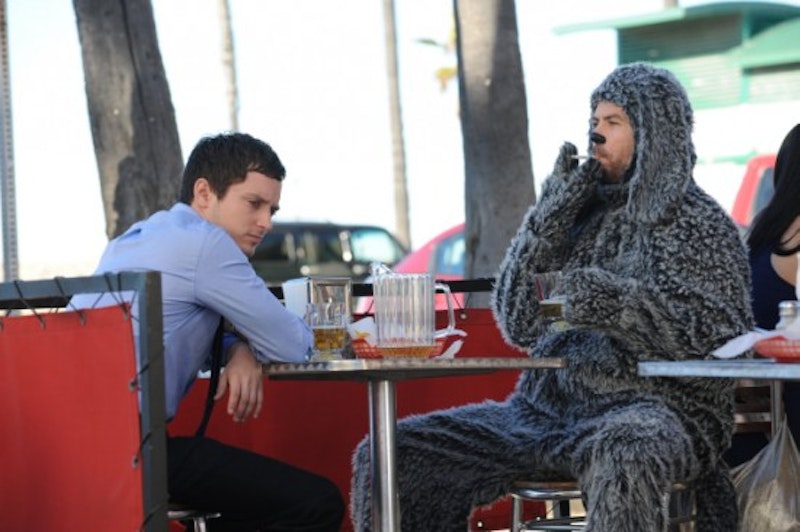 FX’s new sitcom Wilfred has a lot going for it, but it’s a shame it’s not better. Sort of like Louie and It’s Always Sunny in Philadelphia, the show flirts with the subversive and black, but never gets into high gear. Elijah Wood stars as the endearing and depressed straight man Ryan, who starts seeing his neighbor’s dog as a fully-grown Australian man in a dog suit. Wilfred prefers his bong to a bone, masturbates constantly, and engages in various schemes to help Ryan get girls so he can get the leftovers. Wilfred’s callous mischief and Ryan’s macabre outlook so obviously have the potential to work great together, but the show rarely rises above anonymous, safe sitcom fare.

No doubt David Zuckerman is partly to blame for that, as the broad and aggressively simple, crass approach of his other sitcom Family Guy reeks all over this. It’s hard not to make comparisons with Louie, a show that never feels rushed or compromised and manages to make tired saws like dating, post-40 sexuality, and dignity feel fresh and interesting in an almost revelatory way. Everyone’s seen unrequited love played for laughs, but never as sincerely and painfully awkward as when Louis tries to tell his friend Pamela how he feels about her, and failing miserably to sway her feelings at all. Clearly, C.K. is simply a better writer, or maybe he’s afforded with a little more freedom, because Wilfred barely tries to hit at anything true, and is content to wallow in formulaic sitcom scenarios and lazy writing.

Going in, I thought this could be on the level of something like Withnail & I, a brilliantly funny comedy that flies on free-flowing black writing and manic performances, while fleshing out its two depressed alcoholic stooges to be more than carnival cardboard cutouts. But Wilfred is full of quips and innuendos that belong on Two and a Half Men or The Big Bang Theory. A guy in a dog suit smoking pot and wanting to fuck everything that moves is not something you can play for multiple episodes and expect to get away with it. There is a handful of interesting character actors sprinkled through the cast too, which makes the lame duck writing all the more disappointing. It’s great to finally see Chris Klein in something watchable again (he plays a great jock keghead type—all bravura no brains. He’s perfect as Ryan’s neighbor’s boyfriend). Jane Kaczmarek from Malcolm in the Middle popped up somewhere in there, another lost favorite. Ryan’s psychosis and grim perspective coupled with Wilfred’s puerile behavior and attitude is unfortunately only ever glazed over, and what could’ve been a sick, dark, sad show is left neutered and spayed (yikes…. just let that one sink in)