Take Things Into Your Own Hands

Autoerotic: A do-it-yourself film about doing it yourself. 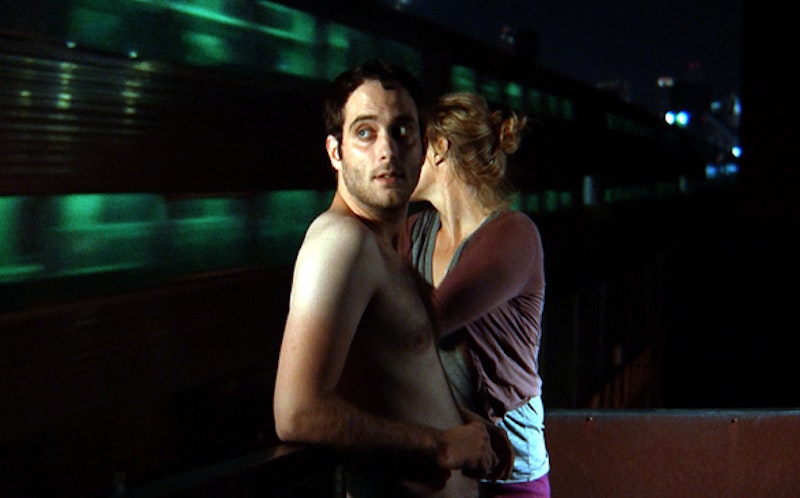 I’m going to do you a favor and save you some time. I mean, I know why you’re watching a film called Autoerotic. Here’s how it pans out, folks:

It’s hard to relegate the four short films that comprise Autoerotic into any single genre. Is this a comedy that severely misfires, or is it a Cosmo-styled look at uncomfortable, ineffectual sex and/or how to please your partner with greater efficacy? Cue incredibly prolonged shots of Chicago highways as New Wave music plays, since all of the hip kids are listening to New Wave, recapturing those halcyon days when we were still gametes, rocking out in our moms’ ovaries. Shots of car taillights blurrily receding into the distance are, presumably, deeply introspective.

Spoiler alerts ahead, so tread this sticky floor carefully.

Part one: Man is dissatisfied with his own dangle. Takes magic pills to expand his doodle’s scale. Abandons a loving relationship to cavort with his newfound growth. His first encounter with the world’s worst actress results in her running screaming from the apartment as wangzilla strokes his leg-sized protuberance, finally alone together at last. Moral: something about a dog with two bones, except it’s one big bone that he ends up making out with.

Part two: Redhead chick is mega-horny. Female friend suggests autoerotic asphyxiation, as any true friend would. Redhead chokes herself and passes out. Boyfriend finds her and chokes her. All is right with the world. Moral: if you get a hot redhead, you do whatever she wants.

Part three: Pregnant chick can’t get off, so she invites her female friend to take care of the job. Boyfriend watches from another room, though he’s not supposed to. Boyfriend uses these misbegotten observations (and iPhone video) to better serve his girlfriend. Moral: who the fuck cares. Hipsters apparently love Apple products.

Maybe searching for a moral in a film which emphasizes the everyday is a pedestrian pursuit from a plebeian viewer who expects cinematic traditions like plot and purpose, but I don’t think it’s too much to ask for something, anything, to grab onto other than a sense of pronounced anticlimax—maybe a well-developed character, or a genuinely absorbing conflict, or even some quirky cinematography. Instead, it’s a lot of shots of people sitting around on beds and speaking too quickly or softly for the mic to really pick up, and a lot of utilitarian, well-hidden sex. This is, in no way, another Shortbus, though the self-generated hype around the film would like us to think it is.

Either way, the film’s PR does it a disservice by describing “in-your-face sex” and “outrageous comedy.” Maybe if something went into someone’s face, this might be slightly more interesting.