Why Are Movie Fans So Sensitive?

A recent blog post by Roger Ebert perpetuates the ridiculous idea that film critics' likes and dislikes matter more than their knowledge of movies. 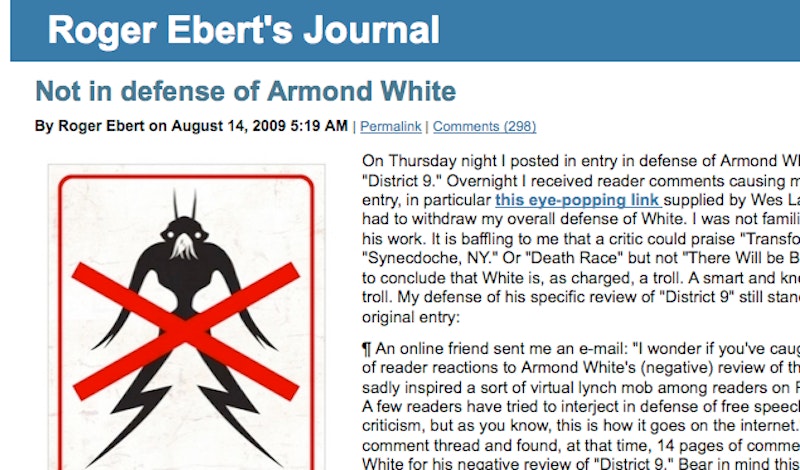 More than a year ago, I had the pleasure of interviewing Armond White, film critic for New York Press and contributor to just about every major cinematic publication in the world. White has been reviewing movies for decades and has no small reputation as a grudge-holding iconoclast; the occasion for my specific interview was his then-recent publication of a Press essay in which he bemoaned the state of filmmaking, film coverage, and film discussion in contemporary American culture. Specifically, he addressed the (to his mind) deleterious effect of Siskel & Ebert At The Movies, which, in White's phrase, "reduce[d] film discussion to the fumbling of thumbs."

The article in question, “What We Don’t Talk About When We Talk About Movies,” occasionally smacked of the curmudgeonly hit-job tone that often afflicts White’s lesser reviews, but it was still impassioned, thoughtful, and rigorous arts criticism. What few responses there were to White’s theses were predictably angry or dismissive, which couldn’t have surprised him; despite a decades-long career and two published books, White’s name has grown over the past few years, in, of all places, the fanboy-heavy forums over at Rotten Tomatoes. It’s here—where White’s frequently contrary opinions are placed next to his colleagues’ and his judgments affect the oracular Tomatometer—that people who pretend to care about film criticism take constant offense at White’s preferences.

You’d think it’d be a great sign for film writing in general if a critic as challenging and knowledgeable as Armond White were being read and discussed by thousands in a movie-nerd salon like Rotten Tomatoes. But it’s precisely because the RT crowd hisses at White’s preferences (as opposed to his ideas, or his writing, both of which are very often deserving of dissent) that I can’t get excited about this supposed “dialogue”; apparently these forum readers are more easily offended than Republican congressmen. The most common criticism directed at White, at RT and elsewhere, regards his likes and dislikes—he loved Norbit but hated There Will Be Blood, for instance. And he recently, predictably, dumped on the awful District 9, and just as predictably, the vitriolic comments began with haste.

It was Ebert, of all people, who came to White’s defense. Writing in his blog on Thursday, August 14, he offered the following, like Henry Fonda talking to the angry mob in Young Mr. Lincoln:

Yes, White disagrees with most people most of the time, and some people all of the time. Why is this a fault? He's an intelligent critic and a passionate writer, and he knows a very great deal about movies, dance, and many other things. His opinion is often valuable because it is outside the mainstream. He works for the New York Press, an alternative paper, and why should such a paper offer a conventional critic?

I read this and thought that, in the event—not at all unlikely—that Ebert had read White’s opinions of his own critical methods in “What We Don’t Talk About…,” this was an honorable defense of the profession over his own pride. It was heartening to see, and since I’ve interviewed and spoken with White at length in person, I felt comfortable imagining that he might have felt the same.

Fast-forward to Friday, when Ebert’s initial post had been online for less than 12 hours, prompting its own thread of anti-Armond comments (though much more considerate and intelligent ones than at Rotten Tomatoes). This caused him to augment the original post by re-titling it “Not in defense of Armond White” and adding the following disclaimer up front:

On Thursday night I posted in entry in defense of Armond White's review of "District 9." Overnight I received reader comments causing me to rethink that entry, in particular this eye-popping link supplied by Wes Lawson. I realized I had to withdraw my overall defense of White. I was not familiar enough with his work. It is baffling to me that a critic could praise "Transformers 2" but not "Synecdoche, NY." Or "Death Race" but not "There Will be Blood." I am forced to conclude that White is, as charged, a troll. A smart and knowing one, but a troll.

It’s hard to shake one’s head fast enough in these situations. I have always felt that White’s criticisms of Ebert were unfair—the man’s love for movies is genuine, as is his energy and enthusiasm for writing about them—but this retreat is disappointing and cowardly. Why, exactly, does knowing a critic’s recent preferences make one “familiar enough with his work”? Why is liking Transformers 2 more than Synechode, New York so unacceptable on principle? I’m still curious if Ebert has read White’s archived reviews, or his book of criticism, or his essays in various international publications and the Criterion Collection. I’m still curious how Ebert feels about Manny Farber’s contention, tongue only partly in cheek, that in film criticism, “[t]he last thing I want to know is whether you like it or not; the problems of writing are after that. I don’t think it has any importance; it’s one of those derelict appendages of criticism. Criticism has nothing to do with hierarchies.”

Our current film culture, particularly criticism, suffers from the widespread, conceited notion that personal preferences matter. Surely they matter to individuals—we should all watch what moves us and feel good about trusting our responses to movies, whatever they are. But the idea, trumpeted in Ebert’s blog post, that a “good” critic is simply one whose Tomatometer overlaps with our own—this is an awful and restrictive way to approach movies. It reeks of thin-skinned unadventurousness, and no legitimate exploration of any kind can come of such a mentality.

Film criticism has always suffered from this divide; movies are popular entertainment, and even after Agee, Farber, Kael, Sarris, and Rosenbaum (to name only a few Americans), the majority of people aren’t willing to accept movie reviews as intellectually legitimate efforts. (The dance, theater, and fine arts criticism communities rarely undergo these public snits, since I imagine the audiences for those kinds of writing aren’t big enough to engender such populist rage.) So when a writer dares to consider Spielberg or Eddie Murphy’s films as artistic works, they’re deemed pretentious. And if they try to link these moneymakers to a lineage that includes little-known names like Pabst, Renoir, or Dreyer, or if they dislike silly hokum like District 9 because they’ve seen better movies attempt similar things, then they’re considered snobbish. The only way for critics to appeal to this mindset has been to adopt a Consumer Reports tone, and just answer the reader’s main question: Should I see it or not?

Now that opinions about movies are more numerous than the movies themselves, even that small service isn’t necessary; if a movie fan doesn’t like his local paper’s critic, he can just find one he agrees with and get more useful recommendations. So naturally, people continue to misunderstand just what film reviews and criticism are meant to be. I’ve often been asked by friends and family whether I liked a certain movie or not. If no, they say something like “That’s too bad, I was going to see it,” which always surprises me; if I truly wanted to see a movie, there’s not a critic on earth who could talk me out of it, and I wouldn’t expect that any of my own writing would do that for someone else. Though it doesn’t always seem this way, I consider reviews to be one more opportunity to think through different questions, or engage with a director’s work, or to talk about my own opinions and interests through the filter of movies. If somebody’s willing to accept those opinions for what they are, I welcome the readership. And if someone else thinks those motives are suspect or pretentious, they can always peruse Rotten Tomatoes.

This is partly because I’m in the minority of moviegoers who really enjoys reading film criticism. I’ve discovered some of my favorite movies thanks to the people I mentioned above, as well as from essays by Roger Ebert and Armond White. There isn’t a single one of them whose opinions I agree with on every movie, but in their best work, all these writers have helped me establish a sense of what matters in a film; through their writing, I have come to a greater understanding of what movies can do—as art, as political statements, as entertainment, and as mile-markers in my personal and intellectual development. It’s reductive to read Andrew Sarris’ The American Cinema or Pauline Kael’s Reeling or Agee on Film and wonder, “Should I see this?” That’s not germane to the real point, which is always: Movies should be taken seriously. They can express essential truths about humanity, and can be as artistically viable as any novel, opera, or painting. And thinking about them in an honest, thoughtful way can be a means of better understanding oneself and the world.

This, I assure you, is the mindset of almost any critic you’ve ever read and considered elitist or snobby. But if you’re like the majority of moviegoers and don’t consider film as a medium to be worthy of study and intellectual consideration, then of course such a mindset will seem that way. No wonder that, of all the critics I’ve mentioned, only Ebert writes for a daily paper, where film coverage is a matter of record-keeping and presumed public interest.

The serious consideration of movies for art’s sake has always been a niche activity, whether in Film Comment or Senses of Cinema. The writers who get to regularly indulge that interest in a mainstream publication have always been exceptional; the rest of us are expected to answer the consumer’s question of necessity, and it’s not often that theory or voluminous historical knowledge sways the lay reader’s actions. But the commenters at Rotten Tomatoes, or Roger Ebert’s blog, or especially Ebert himself, are not lay readers. These are people who theoretically have some serious emotional/intellectual investment in movies and knowledge thereof, and as such they should be feverishly anticipating Armond White’s weekly Press essays. Few other writers guarantee such consistently passionate engagement with the movies, and whether or not you think his opinions are “correct” (I often don’t), you’ll have something to think about, or a movie to see, after reading them. At least you’ll be thinking about film rather than reading advertisements for it.

Only in film criticism will people with a purported interest in the art demean the opinion of an expert because he dares to disagree with them. The path to greater knowledge and appreciation of movies seems pretty obvious to me: watch as many as possible, and read widely about them, specifically the work of people who know more than you. If you disagree, fantastic; it means you’re developing your own opinions and values. But there’s no room in this equation for being as easily offended as contemporary moviegoers—including Roger Ebert, disappointingly—seem to be.