Inglourious Basterds is the first Quentin Tarantino movie with an actual point behind his cinephilia, and it's amazing. (Grade: A) 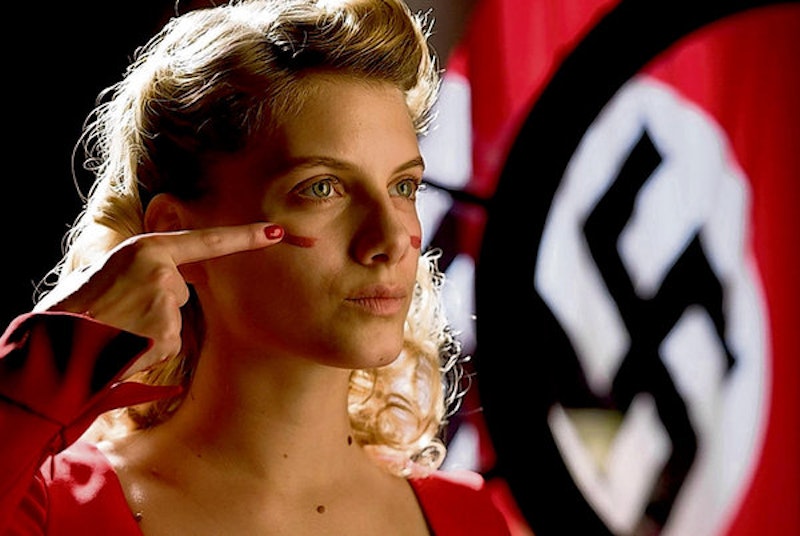 Quentin Tarantino's movies have always been gigantic, thinly plotted hot air balloons filled with rambling dialogue and cinematic references, and to my mind, the disappointment of his post-Jackie Brown work has been his increasing rejection of urgency. It's not as if Reservoir Dogs, Pulp Fiction, and Jackie Brown were thematically profound, but we at least got the sense that conflicts were playing out between people who cared about the outcomes. There was an annoying sense that the Kill Bill and Grindhouse experiments—with their excessive juvenility and outrageous run-time gambits—represented Tarantino simply figuring out what he could get away with. Quite literally, he seemed to have moved his obsessions away from pulp fiction and towards proudly no-brow exploitation genres, without losing his meandering style. And to be frank, he lost me; eight cumulative hours of schlock action-horror and kitschy kung-fu homage over eight years was enough to make me nearly forget how fun Pulp Fiction continues to be.

The shock of Inglourious Basterds is that Tarantino has made a chilling, audacious, and passionate film without dramatically changing his style or methods. He seems instead to have polished them to a dark sheen and injected them with a quality heretofore absent in his movies: purpose. He's still unfurling his scenes—particularly the opening "chapter" in a rural French dairy farm and a later one in an underground bar—with unhurried, garrulous conversation, but they finally feel as stately and emotionally loaded as his beloved Western and samurai influences. And he's still filling his scripts with instantly recognizable, nearly clownish character types, like a Nazi-scalpin', Southern-bred lieutenant (Brad Pitt); a gorgeous noir-worthy platinum blond informant (Diane Kruger); and most effectively, a diabolically polyglot Nazi colonel (Christoph Waltz). But he sets these outsized characters loose in a nearly tactile cinematic world filled with glowing colors, pounding music, and scenes of serious emotional tension. Most importantly, Inglourious Basterds is the first of Tarantino's films to actually say something about how and why we watch movies, rather than just luxuriating in the director's own knowledge and fetishes.

Waltz plays Hans Landa, the almost dandyish sadist known throughout France as "the Jew-Hunter." Tarantino manages to make us squirm at the mere sight of this character even though he only commits one violent act, nearly two-thirds of the way through the film (which itself is a rightful heir to the most celebrated, shocking scene in Hitchcock's Cold War thriller Torn Curtain). His real weapon, like Tarantino's, is his verbosity; he retains an ominous politeness in German, English, French, and Italian, and is capable of excruciating emotional restraint during scenes of obvious evil intent. Landa is also the foremost beneficiary of Tarantino's skill with props. Even in his violent scene, he uses only his bare hands, but every one of his featured sequences includes a mundane object—a pipe, a strudel, a glass of milk, a shoe, a phone—that he manages to endow with incredible intimidating potential.

Pitt's glowering Aldo Raine, meanwhile, is a walking amalgam of American clichés, from his good ol' boy accent to his tribal Indian heritage to his prize soldier's use of a baseball bat for head-bashing purposes, but he's an eloquent and loyal cliché, which makes his role in Basterds' Manichean thematics convincing and fun. Tarantino's frequently underestimated as a rip-off of Godard, whose solid-colored palette and roving camera he continues to ape here, but his characters, like Raine, function inversely to the French director's. Godard's characters all act as if they know they're in a movie, even as their dialogue and the scenery around them undercut cinematic realism. Tarantino characters, however, seem uniquely unaware of how stereotypical they are, or how expertly mimetic and encyclopedic their director's techniques can be; indeed, they seem unaware that they have a director at all. His movies are always packed with in-jokes and allusions (his worst movies often feel like little more, in fact), but the characters are never in on the joke. Even a scenery-chewing grizzled Army officer like Raine—who bears traces of Patton, or Robert Duvall in Apocalypse Now, or Lee Marvin in The Dirty Dozen—never blinks.

The other main performance in this film is Mélanie Laurent, who plays Shoshanna Dreyfus, the daughter of a slain family who herself manages to escape Landa's gun. We meet her again years later, when she operates a cinema in Paris that caters to Nazis through frequent screenings of Riefenstahl and Goebbels' work. When a young German war hero (Daniel Brühl) falls in love with her, she finds herself suddenly dining with Nazi brass, and her theater is picked to host the forthcoming premiere of Nation's Pride, Goebbels' newest bit of propagandistic melodrama. So Shoshanna plans to stage a massacre when her Nazi audience gathers, unaware that the American and British government (including Mike Myers in an incredible cameo as a English commanding officer) will be attempting just such an operation themselves, with the Basterds' help.

Everything moves towards Shoshanna's cinema in Inglourious Basterds, where, in the audacious and thrilling climactic sequence, Tarantino stages a gleeful alternate history that doubles as a boyish war-movie catharsis. This will be the moment that hiss-prone moviegoers object to, though there's more to Tarantino's alternate reality than mere shock value or cultural heresy. Imagine, for example, if 19th-century Native Americans were to see the ways in which the white massacre of entire tribes was depicted in 20th-century cinema. Consider how crass and craven this depiction would seem, how crudely calibrated for maximum audience titillation it would feel, in its glossing of historical fact. When Tarantino stampedes over factual accuracy in favor of audience catharsis in the final reel of Inglourious Basterds, he claims the Holocaust for pulp, just as countless Western filmmakers did for earlier Indian slaughter in the 1940s, 50s, and 60s. The most daring element of Inglourious Basterds is the fact that some Holocaust survivors are still alive, but imagine what a Native American might have thought had he sat through They Died With Their Boots On. Tarantino doesn't indict his audience for enjoying the revenge fantasy in his alternate history; he simply acknowledges that we often go to movies for the very purpose of reshaping history to meet our entertainment demands.

Those critics who feel he's not being properly reverential perhaps think that this specific tragedy is still too fresh for such a treatment; I'm more inclined to admire Tarantino's chutzpah. Just yesterday my Jewish mother included me in a group email asking to sign a petition to have an anti-Semitic website removed from the Internet. I will not sign such a thing—it sits uneasily with my respect for free speech and dissemination of ideas, and my mother's fear feels like a relic from a bygone era. (She was born in 1948.) Certainly older critics who grew up in the Holocaust's immediate shadow are entitled to their sensitivity—but then those of us who grew up listening to relatives describe an unfriendly world that seemed unnecessarily paranoid in the context of our own experiences are entitled to our desire for this fear to get the Tarantino treatment. When I opened my mom's fearful-sounding message, I thought of Inglourious Basterds' climactic scene; I knew she wouldn't like it, but I was grateful that someone had made it. I'll also admit that I, as a moviegoer, have no problem watching Nazis get taste of their own barbarity in this film, though that might not have anything to do with Jewishness. Why should we feel suddenly uneasy watching bad guys get slaughtered, particularly when the violence itself is less gratuitous than any number of contemporary movies, including Tarantino's?

It's perhaps still a little annoying to watch a pampered celebrity director ape the styles and mannerisms of shoestring-budget genre masters as well as the socially-conscious and bourgeoisie-mistrusting New Wave auteurs, and Tarantino stumbles tonally in a few moments of unnecessary Samuel L. Jackson voiceover. But overall, the director takes nothing for granted here. This film is not campy-but-valuable purely for being his creation, as Kill Bill and Grindhouse were. If the characters are broadly drawn, they're no more so than those in Children of Paradise, Marcel Carné's 1945 epic made on the sly under Nazi rule. That movie is, sometimes shot-for-shot, an obvious influence on Inglourious Basterds, and in my opinion this kind of film-historical awareness further redeems Tarantino's callousness towards actual history. It shows that he's more than simply glib. For its cavalier attitude, its bevy of film tricks and allusions, and for the passion that clearly went into it, Inglourious Basterds might not be the most polite Holocaust movie, but it's surely the most fun. Tarantino's greatest achievement is in daring to make it so.