But at least they're trying. 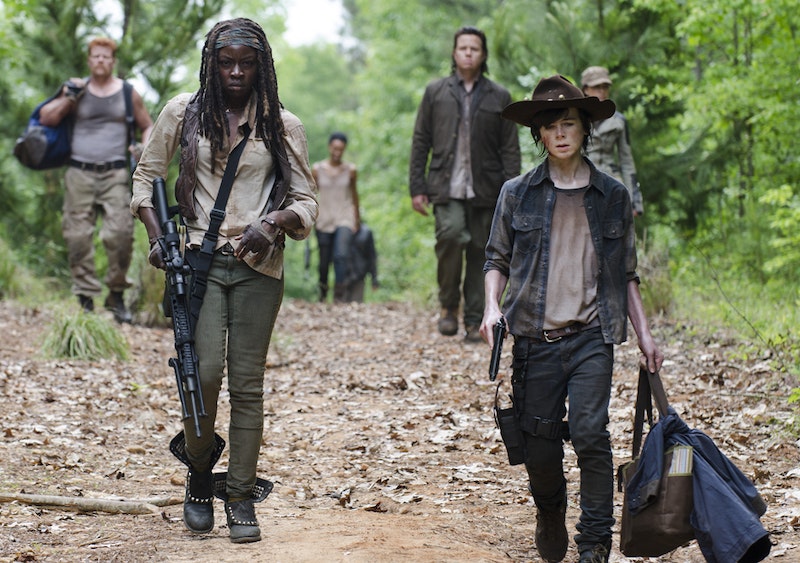 Judging by recent reviews, The Walking Dead is not only the most popular show among the 18-to-49-year-old demographic, but also one of the best shows on TV. Last week, Andy Greenwald wrote a post for Grantland titled, “Undead and Loving It: How Did AMC’s Flagship Show Suddenly Get So Good?” in which he discusses all the things that season five is doing right. Here’s a brief excerpt, praising current showrunner Scott Gimple:

The missions thus far this season have been less about chasing vague goals or villains and more about taking care of people we already know and love: Carol taking down Terminus, Tyreese protecting Judith, Daryl driving off in search of Beth… The Walking Dead doesn’t have to be relentlessly bleak just because every character is going to die. The same is true in our universe, and we still find time to smile occasionally.

Alan Sepinwall, in his review of the most recent episode, "Self Help," added:

...those episodes from last spring, while at times frustrating and/or dull individually, did the necessary (and long-overdue, going back several showrunning administrations) work of turning the supporting characters into actual characters. Beth wouldn't have been able to carry an episode by herself if not for her travels with Daryl, and Bob's death wouldn't have hit nearly as hard without the spotlight moments he and Sasha got in that period.

I'll admit this season has been better than expected, but I wouldn't say that Bob's death hit "hard" (though it certainly dragged on), and the only reason we were able to have a Beth-centric episode (last week's "Slabtown") was because she woke up in an Atlanta hospital, surrounded by an entirely different group of survivors—who cares about Beth, it was something new. Yes, Gimple has done better than his predecessors at making The Walking Dead more than just watchable, but it's impossible to really turn a show around in it's fifth season.

I've argued before that The Walking Dead should’ve been more like Lost, intercutting scenes of ravaging zombies with pre-apocalypse backstory for its recurring characters. We've gotten that to an extent: Michonne, The Governor, most recently Sgt. Abraham Ford, but there are still characters that have been around season after season that I know almost nothing about—I care about Glen, for example, in a kind of abstract way (he's an original character, he's important to Maggie, etc.) but I couldn't tell you anything about him. Maybe that's the point; after the zombie apocalypse it doesn't matter anymore if you used to work at a car dealership or if you loved Metallica or if you were married and had four kids. It's all about survival now. That discussion pretty much dominated season two, and it's all Rick's been concerned with for most of the show; just find somewhere—Herschel's farm, the prison, Terminus—to settle down and be safe. Of course, on The Walking Dead, nowhere is safe.

What I think has worked so well this season has been the pacing. When it was revealed that some of the cannibals from Terminus had survived Carol's assault, I thought this would be the season-long arc. Rick & co. vs. a gang of vicious cannibals, a couple of minor characters lost along the way, with Rick & co. winning in the end (because, of course). Instead, that story was over in a single episode and The Walking Dead moved on to more interesting things—like Sgt. Ford's mission to get Eugene to D.C. Even if, as it was revealed on Sunday, Eugene isn't actually a brilliant scientist who can save the world, that story at least offered some hope, something more than just nihilistic brutality.