The ritual of the black hand to become a made man is the old-world practice. 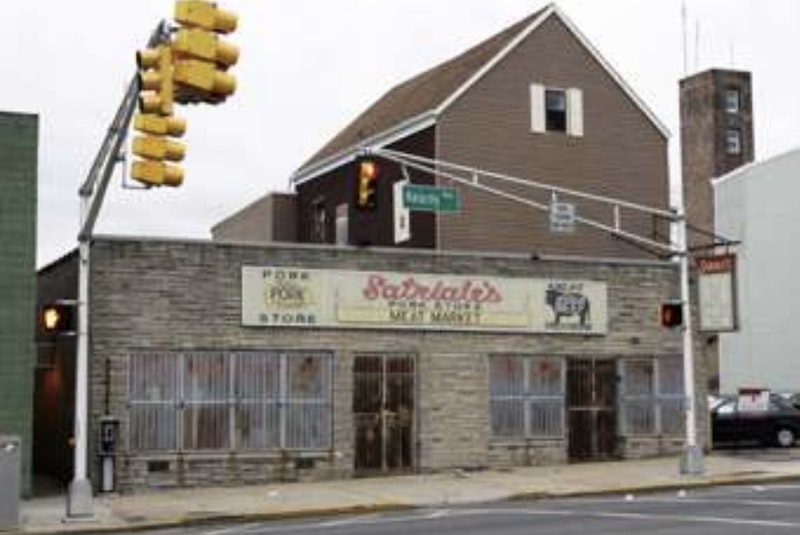 There are no good guys, just big tough guys, cold-blooded killers, psychopathic compulsive liars, and old-school knock-around guys. It’s a twisted tale, always re-told by unlucky dead guys wearing cement shoes. The rest are doing 20-to-life and die in prison. The late actor James Gandolfini and most likely whacked in the finale episode of the HBO series might have a scary story to tell. The Sopranos would still be portraying the character of Jersey mafia boss Tony Soprano. Who knows?

They're all sitting out in front of Satriales Pork Store/Meat Market, a hanging sign sways in the air advertising suckling pigs. The whole gang's lounging in front of the market, puffing enormous stogies, perusing the Daily Racing Form, catching some rays, and shooting the breeze. But that's when they weren't in the back room of the butcher shop chopping up some sorry stiff who got on the wrong side of "the family" now being ground into human beef or slabbed out, sliced and diced on a stainless-steel table, maybe DOA in some shallow grave in the South Jersey Pine Barrens. Possibly even in the meatballs and hot or sweet sausage. From make-believe to made-for-TV, all the way to the White House and the sacred halls of justice and democracy.

Martin Scorsese and Francis Ford Coppola’s depictions are caricatures and can't compare to these real scrappy hustlers. The Hollywood version of bigger-than-life gangsters, make-believe mobsters, and the demise of the Cosa Nostra makes for good entertainment. The Godfather trilogy and Scarface can't come close to the wrecking crews of the syndicate, the skim, another heist, another contract hit, strong-arm tactics muscling in on another's territory, gambling, extortion, drugs, and prostitution. They were bribing elected officials and police payoffs from their humble beginnings at the get-go.

Better settle up your vig with interest, or get your legs broke, and lose a finger or two. All mobbed up with the drawing of blood and burning the saint's holy cards. They don't do that crazy initiation thing in the real world, do they? Since its inception in New Orleans in the 1800s and later in NYC in the 1920s. The ritual of the black hand to become a made man is the old-world practice. It's all about respect, honor, and paying tribute with kickbacks to the big boss. Being a good earner was equivalent to being a professional chiseler. In the 1980s, United States Attorney Rudy Giuliani took down New York's mob families back when he was still relevant. Those were Rudy's glory days before becoming a greedy, selfish bottom-feeding ass kisser clown. Rudy became what he most detested.

He learned the inner workings of how the mafia operates in this country from the top down and taught longtime client and friend Donald Trump the ropes. The ways to bribe, extort and intimidate friends and rivals. The ways to stiff contractors and their workers out of wages. The art of bullying and avoid paying taxes while stealing from those who do pay. And then there were mountains of lawsuits. So Rudy took down the mob with the RICO act and created a juggernaut golem decades later. Trump’s father Fred was also an early inspiration to the young upstart. He was teaching his son how to swindle real estate and become a super slumlord.

The old Rolling Stones song “Sympathy For The Devil” has a line, "I shouted out, who killed the Kennedys?” After all, it wasn't you or me but most likely crime boss Sam Giancana. At the time, Bobby Kennedy was sticking his nose in some heavyweight stuff, while his brother, JFK, snubbed the mafia after they got him elected. Joe Kennedy, the bootlegger patriarch of the Kennedy clan, was in the thick of it with organized crime. Frank Sinatra and Peter Lawford, bit players with Jimmy Hoffa, vanished as Marilyn Monroe's apparent suicide occurred. She was fucking them all anyway. Two-bit hood Jack Ruby and loner with a rifle, Lee Harvey Oswald, we're patsies to the truth.

Gangsters like Bonnie and Clyde, John Dillinger, Al Capone, Machine Gun Kelly, Pretty Boy Floyd, among countless lesser-knowns, became mythical legends to the American pantheon of anti-heroes. Modern-day Robin Hoods robbing banks and the wealthy while sharing their ill-gotten booty with the poor across the nation. Whether during the Great Depression or decades of plenty, mob rule runs the money machine. Today it's a dog-eat-dog, kill-or-be-killed scenario of crooked politicians vying for a better position to solicit funds to keep them and their white-collar criminal buddies in power. One side is no better than the other. Throw some white supremacy bullshit in the mix for some potent politics. They’re equally complicit and guilty in the sacking of America. To watch and wait for the next Mafia Don wannabe to become President of the United States. Unless they get whacked first.