You Don't Nomi is a great new documentary about the cult of fandom around the infamous 1995 flop Showgirls. B+ 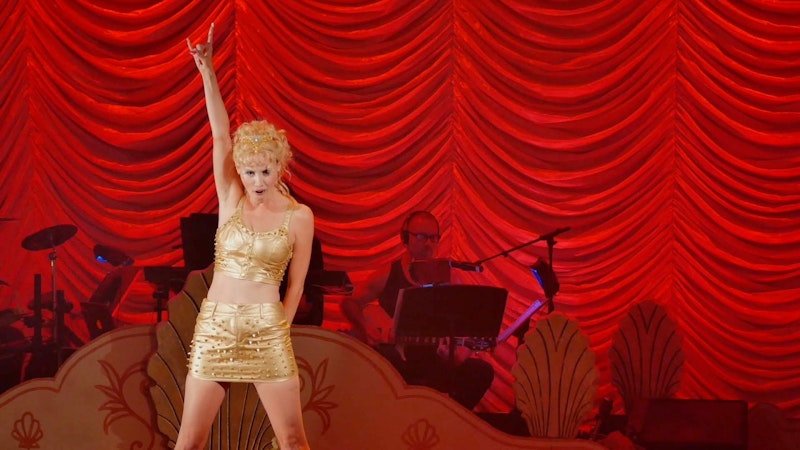 There are several ways to make a documentary about a notoriously bad movie. You can make fun of the movie for being bad and luxuriate in the badness. You can try to make the case that it's actually underrated, or that it's secretly great. You can apply a scholarly analysis to the material, or examine the ironic and/or campy fandom that's emerged around the movie.

You Don't Nomi, a new documentary about 1995's Showgirls that's directed by Jeffrey McHale, takes an "all of the above" approach, utilizing voiceover testimony from different critics and experts, along with archival footage from the movie itself and elsewhere. This adds up to provide a complete picture of Showgirls and its cultural legacy. It's scattershot, but entertaining.

The film premiered at Tribeca a year ago and got a few one-night-only screenings last fall, paired with Showgirls itself in some cities. It hits VOD next week, as Showgirls marks its 25th anniversary later this year.

In the lead role of aspiring dancer Nomi Malone, the filmmakers cast Elizabeth Berkley, who at the time was best known for her role on the teen show Saved by the Bell, and the film got an NC-17 rating, which at the time was considered box office poison.

Showgirls became one of Hollywood's most notorious flops, and a critical disaster. Among the elements savaged were Berkley's in-over-her-head performance, the jarring tonal shifts, the crass exploitation, and an understanding of both dialogue and human sexuality seemingly conveyed by someone with scant experience with either. Showgirls, one of the film's interviewees says, "seems like it was written by a 13-year-old, wondering what adults do at night."

So why is this famed flop worth commemorating, 25 years later? There's emerged a critical faction, if not a consensus, that's stuck up for the film, led by Adam Nayman, author of the 2014 book It Doesn't Suck: Showgirls. We hear from him in You Don't Nomi, along with critics who are less enamored; one woman interviewed repeatedly denouncing the film, and Verhoeven's other work, for incipient misogyny.

We're also introduced to the camp subculture that's celebrated Showgirls, including at least two different stage shows that re-enact the film—one with drag queens, as well as an off-Broadway musical version that dials up the already excessive overacting to about 100. And in addition to the many clips from the movie itself, we see old footage of Siskel, Ebert and other critics denouncing Showgirls, and we see the time it won a record number of Razzies. Perhaps this film will get across the point of how stupid, lazy and mean-spirited the Razzies are.

None of the principals of the Showgirls itself—Verhoeven, Eszterhas, Berkley, or any of the other actors—participated in the documentary, although we do see old interviews with all of them.

The many film clips are well-edited, to the point where the interviewees speak entirely in voiceover so as not to distract from them. However, the film sometimes illustrates points about Showgirls via clips from Verhoeven's other films, a device that doesn't work.