He wondered about what might happen if a candidate named “Nobody” appeared on the ballot. 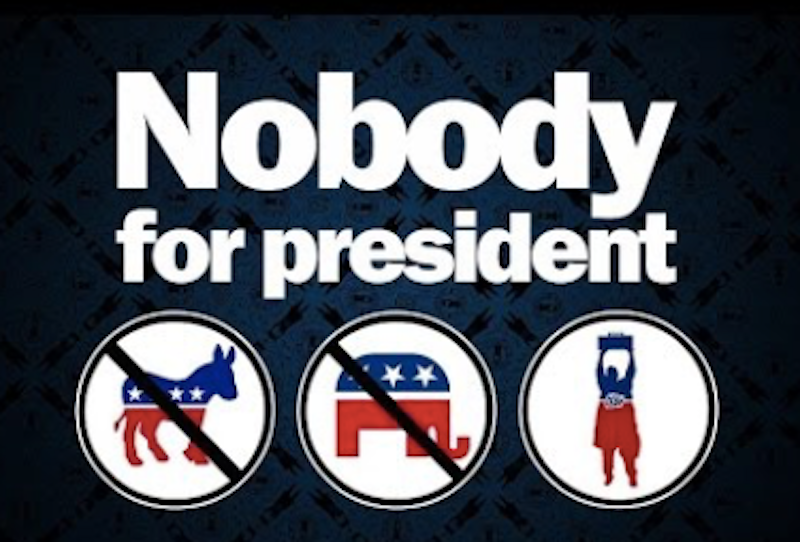 Nobody ran for Mayor of Keene, New Hampshire, the Elm City, at the October 2019 non-partisan municipal primary. Seriously.

He placed red, white, and blue lawn signs around the city:

NOBODY Tells The Truth

NOBODY Can Fix The Economy

NOBODY Cares About The Poor

He also had a radio interview and some press coverage about his name change. He even got his picture in The Boston Globe.

Nobody is his legal name. He changed it from Richard Goyen Paul before the election. It’s Nobody on his driver’s license. The only problem he’s had so far with the name change: the local Social Security office’s computer system had difficulty submitting a one-word name for his new card.

A native of Michigan, Nobody came to New Hampshire as an adherent of the Free State Project, announced some 17 years ago at the Washington, D.C. headquarters of the American Enterprise Institute. The Project urges libertarian activists to move to the Granite State and take it over, creating, as Winter Trabex wrote in the Manchester Ink Link, an island of small government activity in a nation going increasingly mad with unwieldy government power.

The goal was 20,000 people. Today, 17 years after New Hampshire was chosen for this purpose, most sources estimate that about 5000 Free Staters have moved here.

He wouldn’t be the first Free State candidate to change his name. Ian Freeman, formerly known as Ian Bernard, was expelled from the Project after arguing that 14-year-olds are capable of consenting to sex with adults. As Ian Freeman, he ran for governor in the Democratic primary in 2016 and for state senator as a Libertarian in 2018. He hasn’t filed for office yet in 2020, but filing runs until June 12.

Another ex-Free Stater, Christopher Cantwell, was expelled for advocating violence against government agents. According to Trabex, he belonged to a group called the Free Keene Squad whose members filmed “themselves harassing parking enforcement staff working for the City of Keene.” Mr. Cantwell has since received national media attention as the “Crying Nazi of Charlottesville.”

The Free Town Project, described as an offshoot of the Free State Project, attempted to gain control of the small town of Grafton, New Hampshire. Its program included repealing “oppressive regulations” such as town planning, zoning, and building codes, and the non-enforcement of laws“prohibiting victimless acts among consenting adults, such as dueling, gambling, incest, price-gouging, cannibalism, and drug handling.” They also wanted to repeal the state law prohibiting more than two junked cars on private property and privatize the roads and the schools.

Needless to say, the Free Staters made Grafton’s Town Meetings, the annual gatherings of the citizenry to vote on budget items and resolutions, quite hectic. When some Free Towners objected to the “Rules of Decorum,” which prohibit cursing, name-calling, and personal attacks, it was only the beginning of a long night. There was much shouting and use of parliamentary procedure and the meeting ran into the early hours of the morning.

The Grafton Free Towners filed some 20 ballot initiatives, including a proposal to defund the public library and slash the two-man Police Department’s annual budget to $10,000. After all, Free Staters believe taxation is theft. As the local residents like their public library and to have the potholes filled every now and then, they turned out in record numbers, overwhelmingly defeating the proposals while crushing the Free Town candidates for municipal office.

This isn’t to say that Nobody has done any of these irritating things: merely that some of his associates have.

The idea of changing his name came when he noticed an ironic campaign sign, “Vote for nobody,” near the house where he lives. While he disliked the anti-voting message, he wondered about what might happen if a candidate named “Nobody” appeared on the ballot.

So, after completing the name change, he went ahead with running for mayor. He went to the City Clerk’s office in August 2019, where he filed a Declaration of Candidacy form and paid a $5 filing fee. His platform was (1) preventing additional spending increases to eventually lower taxes and (2) an open door policy for residents who want to discuss the police.

Nobody is an expert on police conduct. He finds the Keene police “very professional.” Personally, he’s had no problems with them. This speaks well of both Nobody and the police officers, as he’s been arrested some 11 times in Keene on charges of disorderly conduct, drugs, or criminal trespass. The New Hampshire court system’s records also show he’s spent at least 60 days in jail.

Unsurprisingly, his mayoral campaign was slowed down by a difficulty with the law, which took him “off the campaign trail for a month to deal with it.”

Primary Day came. In a three-cornered fight, the two major candidates polled 1113 and 1111, respectively. Nobody: 47.

Nobody was undaunted. After the announcement of the results, Nobody told the media, “The people of Keene have spoken and clearly they prefer to see me as Governor than as Mayor.” Thus Nobody announced his candidacy for governor in the Republican primary against the incumbent, Gov. Christopher Sununu.

The Governor’s political operatives have not publicly responded to Nobody’s announcement.

On June 3, 2020, the first day of filing, Nobody became the first Republican candidate for governor in the party primary by filing a Declaration of Candidacy form and paying his filing fee of $100.

Nobody is responsible for the outcome of his campaign.