The Politics of Killer Pants

In the horror-comedy Slaxx, consumers are consumed. 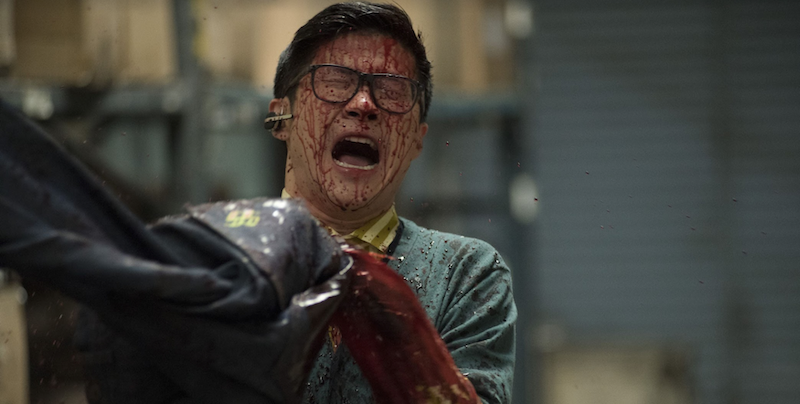 Slashers aren’t generally celebrated for thoughtful political commentary. But Canadian director Elza Kephart has seen a lot of scythes swing forward and back, and in that bloody rhythm has heard the satisfying “thunk” of retribution. Her 2020 film Slaxx, newly available on Shudder, wears the gaudy garb of camp, but it’s unmistakably sashaying down the catwalk of justice.

In a genre known for its varied antagonists, Slaxx’s monster is still pleasingly unexpected. The film is set on the eve of a grand opening for the Canadian Cotton Clothiers’ flagship store. The staff is preparing for the first sale of Super Shaper jeans, which magically conform to your body and butt. Unfortunately, the Super Shaper’s are super-sentient, and have a taste for blood.

That’s a high concept that’s hard to live up to. But Kephart provides many vivid ways to die by vampire pants. One vain scenester employee has her torso squeezed in half. Another has a finger torn off in a zipper. The pants slither, crawl, and dance, the waistband slavering, the pockets opening like eyes. I won’t say that you’ll never wear pants again, but you might give them a second look before putting them on.

In the best slasher tradition, most of the characters are irritating enough that you more than half root for the pants. Erica Anderson as bunny-attired pink nightmare-ego influencer Peyton Jules and Brett Donahue as homicidal positive-thinking middle-manager Craig exude especially manic and repulsive cheer.  But the jeans aren’t just coming for irritating individuals. They have a systemic critique.

CCC claims to source its material carefully. It’s environmental- and labor-friendly, which is why wide-eyed, idealistic new employee Libby (Romaine Denis) is so eager to work at the store. But from the first frame of the movie, it’s clear the corporate branding is a lie. The cotton for the jeans was picked by child labor in an experimental field in India. The blood of the global poor feed North American appetites for status, fashion and discount designer brands. So the blood of North Americans will feed the discount designer brands. That’s a stylish reversal.

The metaphor is well-tailored, but there are things about the cut that don’t sit quite right. The film explains its mechanics in too much detail. We don’t need an extended backstory for the pants to tell us what the film is about.

If the pants have been worked too much, some of the other characters could’ve used more embellishment. Shruti (Sehar Bhojani) is appealingly cranky, and the film would’ve worked better with her in the lead. Libby, though, is so bland, and the rest of the workers so unpleasant, it’s hard to feel much sympathy as they become pants fodder. Again, in a slasher you want some kills to be satisfying. But in this case making so many of the victims unlikable compromises some of the film’s political charge.

The CCC ruthlessly exploits and mistreats its own workers. Libby has to buy her own clothes for the job from the store and they don’t even give her an employee discount, and Craig is unconcerned with the health and safety of his employees during the pantspocalypse, to put it mildly. “We take care of our own here at the CCC,” Craig says cheerfully as he shoves a corpse out of sight.

The problem is that Craig’s bloody-minded indifference is shared to some extent by the movie. Nor does anyone draw a parallel between the CCC workers in Canada and those in India. The jeans come to eat their exploiters, but in large part they feast on those that capitalism is also eating. Middle managers are about as high as the pants are able to hike themselves. The capitalists themselves largely escape.

Perhaps that’s supposed to be a grim acknowledgement of the limits of justice, though the film doesn’t do much to sell that interpretation. More likely, it’s just a natural outcome of an idiom where revenge is so close up and personal. Slasher politics work well in part because the tactile rush of claw and axe is so visceral. But the dull tearing of sinew from bone isn’t always conducive to subtle analysis. It’s no wonder that Slaxx doesn’t fit its themes perfectly. What’s surprising is that Kephart squeezed so much intelligence and heart into those jeans.