I imagined helping her defeat evil, then enjoying a relaxing evening at home. 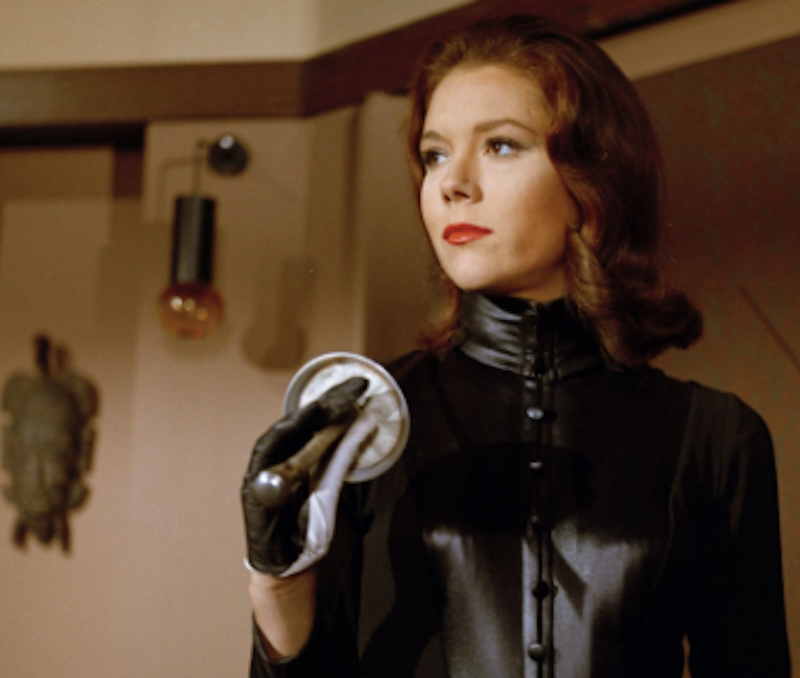 The actress Diana Rigg died last week at 82. As it happens, Rigg and death were the themes of the first few pages of my book Six Names of Beauty (Routledge, 2004), which are reproduced below.

My first crush was directed not at a girl in my class or my neighborhood but at an image on my television screen. The Avengers was a British show, half-spy adventure and half-surrealist cinema. The lead female character, foil to John Steed's unflappable bowler-topped gentleman, was Mrs. Emma Peel, played by Diana Rigg. There seemed to be no Mr. Peel in the picture to interrupt the accessibility of the magnificent Mrs. She often wore skin-tight leather jumpsuits a la Catwoman (I also had an affection for Julie Newmar in the latter role), and she moved around the British countryside with a grace usually reserved for professional dancers. She kicked ass; an early example of the feisty, self-sufficient, potentially violent heroines who are now a staple of everything from Disney animations to high literature. She met every dilemma with perfect composure and wit. And of course Rigg was beautiful, all cheekbones and sleek curves.

At 12, I believed I was in love with her, and I pictured us together—not having sex, but just talking and perhaps sharing a chaste kiss. I read Rigg's personality from her performance, and fantasized that if she knew me, she'd love me too. But it was safe to want her, because she was entirely inaccessible (and people who don't realize that about their celebrity crushes mutate into stalkers). With a girl in my class, I might’ve had to express myself. With Mrs. Peel I didn't, and I could invent long conversations with her to be held as we walked hand in hand. I imagined helping her defeat evil, then enjoying a relaxing evening at home. Erotic longing of this kind leads to intense experiences of beauty, and I certainly had them.

Rigg remains forever young on the reruns and DVDs of The Avengers, but, of course, in life, many aspects of her loveliness and of my desire were fleeting. The fleetingness of youth and its particular varieties of beauty provide a great theme of poetry, and of life. Thus the poets advise the virgins to make much of time. Rigg ripened, and when next I saw her, 20 years later hosting Mystery, she was still desirable, but in a different way. Her eyes emitted that flash of wit; it had deepened into intelligence, and her charm into character. But I hate to say it: I felt loss.

The relation of beauty to time and loss is fraught with all of our feelings and ideas—and our repression of our feelings and ideas—concerning life and death. It must’ve been difficult for someone like Rigg to age, and I congratulate her for doing so gracefully. But for "celebrities" or "sex symbols" to maintain unsullied their status as objects of desire, they have to die young. James Dean, Marilyn Monroe; the great beautiful dead of rock 'n’ roll: Jim Morrison, Jimi Hendrix, Kurt Cobain. Some beautiful people (Monroe) kill themselves. Some (Mick Jagger, Jane Fonda) try to maintain themselves in a semblance of youth. Some finally relax into their age. But of course in the long run whatever they and we have—youth, beauty, love, possessions—we lose.

The philosopher and critic Arthur Danto asks a simple question: why do we bring flowers to a funeral? What is the association of beauty with death, or with grieving? Perhaps, he says, we need a contrast to our grief, a small pleasure in the face of an overwhelming pain, a surcease from mourning that yields a kind of distance or perspective. But the relation of beauty to pain and in particular to loss is deeper and closer than that, I think. Beauty always bears within it the poignancy of loss, and the cut flower is not only an occasion of visual pleasure, but also a symbol of what passes.

The loss that lingers in everything beautiful intensifies desire. If we didn’t age, if things didn’t disintegrate, the experience of beauty would be impossible. Without loss, desire could be fulfilled at will; things would exist for us as perfect resources, always potentially available for use. That we can lose things, that in fact we are always in the process of losing everything we have, underlies the longing with which we inhabit the world. And in that longing resides the possibility of beauty. The flowers and music at a funeral are meant to make grief more poignant, to bring everyone into full participation with the grief, by including in it the touch of beauty. There is always a doubleness or an irony for us in the vitality of the cut flower. But grief and death call on us to yearn, and perhaps they call on us to yearn impossibly, to yearn for something that is always slipping from our grasp.