While technically accomplished, Everything Everywhere All At Once has the emotional and philosophical depth of a puddle. 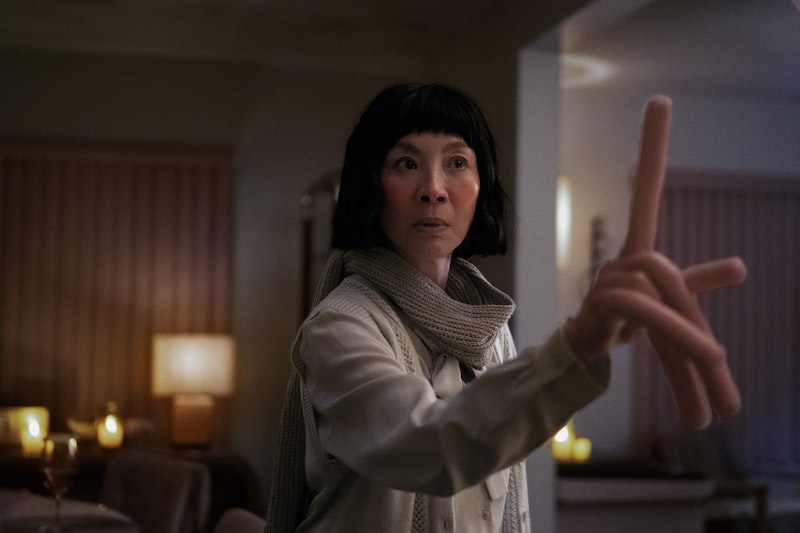 Everything Everywhere All At Once is another testament to A24’s marketing acumen—never in my 29 years has a movie studio had “fanboys” or people who see everything they release on principle or cheer when their logo pops up. I’d never heard of this movie, directed by Daniels (Dan Kwan and Daniel Scheinert, who also made 2016’s Swiss Army Man together), until about three weeks ago. Soon after, it became the highest rated film on Letterboxd, leapfrogging over Hara-Kiri, Come and See, Parasite, and The Godfather. The same thing happened on IMDb, and for anyone crossing their eyes at the movie’s googly eyes being featured on Letterboxd, IMDb has been doing the same thing for decades, and now it’s so bloated with ads that it’s almost unusable.

Whether or not the word of mouth was juiced by some checks and paper bags here and there isn’t important, because Everything Everywhere All At Once is a genuine independent hit; hardly an “arthouse” film, that’s where it’s largely playing, both because popular taste continues to dumb down and the movie industry continues to shrink and shrink. 12 years ago, Edgar Wright’s Scott Pilgrim vs. the World delivered the same kinetic and ultra-saturated nerd vision on display here, but at least he had the decency and common sense to make that a fun movie and nothing else. Maybe teenagers still dream of Ramona Flowers, and perhaps even fewer still are searching for their own Michael Cera to emotionally obliterate, but Scott Pilgrim doesn’t have any philosophical or big dramatic pretensions.

Daniels do, and rarely has a film lost me faster than Everything Everywhere did about half an hour into its 146 minutes. Michelle Yeoh plays Evelyn Wang, co-owner of a laundromat with her husband Waymond (Ke Huy Quan), and she’s about to burst from stress: her daughter Joy (Stephanie Hsu) is a miserable disaster, the IRS and a particularly hostile agent played by Jamie Lee Curtis are dead set on ruining the Wangs and closing the laundromat, her father Gong Gong (James Hong) is becoming a burden, and she’s disappointed and depressed. Middle-aged, tired and overworked, with so many years behind her, so few ahead of her. In the midst of this depression, Evelyn often slips into reverie, and besides annoying her family and the IRS agent, it provides an opportunity for multiverse hopping trans-dimensional humans to inform Evelyn that, out of all possible universes, she has been determined best fit to defeat Jobu Tupaki, a malevolent force fit on destroying everything everywhere all at once.

What follows is an incoherent hodgepodge of dumb jokes, even dumber philosophy, non-stop film and pop culture references substituting substance, and some fantastic martial arts sequences. There’s also plenty of bad action, set pieces without any visual logic or emotional fuel. For a movie with this title, they sure stay stuck in that IRS building for a long time! And more than anything else, I was put off by the movie’s adolescent assumption that we live in a meaningless universe. Whether or not you believe in God, there’s plenty of meaning and purpose to be found in life. Daniels’ “deep” movie about the meaning of life misunderstands its own questions and delivers appropriately insipid answers: you did okay, even if you’re unhappy and disappointed with your life. Your tried your best. This is the lying, optimistic counterpart to Synecdoche, New York, another solipsistic and secular film that never tries to reassure the audience that everything’s going to be all right.

Everything Everywhere All At Once is technically impressive and occasionally mesmerizing, but as soon as Evelyn starts multiverse jumping, the cutting becomes too quick and the whole thing just glazes over, until you’re stuck with two rocks talking in title cards, having a pre-teen level conversation about the vastness of time and outer space. Big dumb action movies and superhero franchises are one thing, but I can’t accept a movie that lies to its audience and lets it off the hook for living an easy life, a second-hand life, and holding their hand as they shiver in quiet desperation all the way to the grave. There’s zero upside to going bald or losing your baby, grief is immense and inescapable and unending. There’s so much beauty and meaning and love to be found in this world, and often cinema is a venue for that most pure expression of human hope. For such a technically accomplished film, it’s a shame Everything Everywhere All At Once has the emotional depth of a puddle.