Camp queen Renée Zellweger in the entertaining The Thing About Pam. 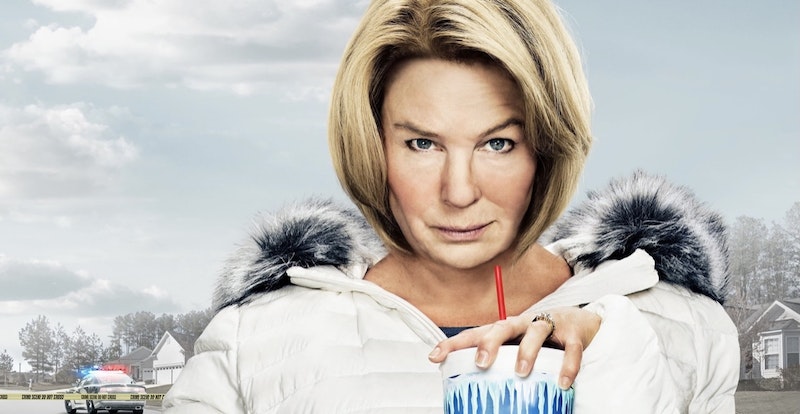 In his 2012 essay “Notes on Camp/Anti-Camp,” filmmaker Bruce LaBruce expanded the definition of camp beyond Susan Sontag’s foundational text to include a long list of subcategories (Classic Gay Camp, Bad Gay Camp, Good Straight Camp, Bad Straight Camp, Reactionary Camp, Liberal Camp, and so on), the essay itself an exercise in what might be deemed Academic Camp (see: Sontag, Pauline Kael, Slavoj Žižek), playing with some of the same lofty writing as Sontag to a more self-aware and pointedly sardonic end. If LaBruce’s tongue is planted firmly in his cheek—according to its introduction, he presented the essay at the Camp/Anti-Camp Conference in Berlin dressed in black coattails—his categorization is nevertheless helpful in situating camp into a broader historical and cultural context, venturing beyond Sontag’s dated notions of high and low culture in favor of a more vast inventory that accounts for all the ways in which the once “private code” of camp has been co-opted and bastardized for the masses.

In the ensuing decade, LaBruce’s species have bred dozens more sub-species, including a niche sub-category that I’ll call Karen Camp. What began as a form of Unintentional Camp (innumerable candid cell phone videos of white women breaking into public hysterics) eventually went mainstream, and the archetype of a busybody white woman became a mainstay of a new Liberal Camp that LaBruce probably wouldn’t hesitate to label as Bad. Examples of Karen Camp include a particularly unfunny SNL sketch, a BET-produced thriller, Sarah Paulson as Linda Tripp on Impeachment: American Crime Story, and most recently Renée Zellweger in the title role of NBC’s true crime dramatization The Thing About Pam.

The Thing About Pam is pretty good, resisting the self-serious Emmy-grubbing of most True Crime Camp (Impeachment included), opting for a darkly comic take on the real life events surrounding the deaths of Betsy Farria, Shirley Neumann and Louis Gumpenberger. If that sounds tasteless, wait until you see the fat suit Zellweger wears in the role of Pam Hupp, the Big Gulp (here, “Chill Chugz”) slurping Karen who connects the three bodies. The Pam Hupp saga is too long and complicated to fully recount—for readers who don’t mind spoiling the series (or don’t watch TV), I recommend Jeanette Cooperman’s longform account in St. Louis Magazine—but the short synopsis goes: the body Betsy Farria (Katy Mixon), mother of two and best friend of Pam Hupp, is found by her husband Russ (Glenn Fleshler), whom the new Troy, Missouri DA (Judy Greer) prosecutes for the murder despite evidence pointing to his innocence and Pam’s guilt, including a revised life insurance policy naming Hupp sole beneficiary.

It takes until the fifth episode for Pam to ask to speak to someone’s manager—the cashier at a pet store, whose boss keeps a safe distance from Pam and whispers, “It’s that Hupp lady.” (“From Dateline?” the cashier asks, in a bit of broadcast TV cross-promotion.) The scene underscores a key to the show’s success: unlike Sarah Paulson’s Linda Tripp, Zellweger’s Pam isn’t an object of scorn or ridicule; she’s a grotesque whose very nature is to repel, and the series gives us none of the usual pained ambivalence about the toxic personality at its center. Even in flashbacks to the emotional abuse Pam suffered under her mother (Celia Weston), she’s still a manipulator whose thinly-veiled resentment can’t be fully explained by a lousy childhood. If Fargo’s Marge Gunderson is the prime cinematic example of Midwest Nice, Pam is TV’s antidote: Midwest Not So Nice.

The Coens’ masterpiece is a clear antecedent to this brand of entertainment, enough that it inspired its own anthology series for FX. Each season explores new depths of depravity lurking beneath the veneer of Midwestern friendliness, sometimes via arch third-person narration. The Thing About Pam uses similar narration (voiced by Dateline’s Keith Morrison) more consistently throughout its running time, giving the show a storybook quality that recalls Vincent Price’s narration in Tim Burton’s Vincent (Bad Straight Camp, according to LaBruce) or even John Hurt in Lars von Trier’s Dogville and Manderlay (High Camp/Good Straight Camp and Bad Straight Camp respectively, according to me). Morrison’s pansophical baritone grounds an otherwise unwieldy narrative, a strong character in its own right.

But Zellweger is the star, the series’ raison d’être—offering exactly the kind of performance actors should give fresh off a second Oscar win, pearl-clutching critics be damned. (I’d pay to hear LaBruce’s candid thoughts on the Bad Gay Camp of Judy, specifically the scene late in the film where Garland stumbles in a performance of “Somewhere Over the Rainbow” and the gays come to her rescue.) Her portrayal of Pam channels the bad taste grotesquerie of Divine (Classic Gay Camp) by way of Martha Stewart, swapping their East Coast accents for a Midwestern speak as cloying as the tub-dispensed grenadine Pam so generously adds to her Diet Dr. Pepper.

The overwhelmingly negative critical response to Zellweger’s performance is probably a sign she’s doing something right. A particularly bad review singles out the inability to discern Zellweger’s smile from her frown as proof that Pam is “simultaneously broadly cartoonish and blandly nonspecific.” I think it’s the key to understanding the character of Pam, and maybe all Karens, for whom contentment and  ressentiment are never mutually exclusive, whose only true happiness is at the expense of someone else’s misery. And if this kind of portrayal lacks interiority—a common complaint among the show’s bad reviews—so what? I can’t imagine lodging the same complaint against Divine’s similarly vulgar burlesque of Jackie O in John Waters’ early dramatization of the Kennedy assassination, the same tradition of Reenactment Camp that Zellweger emulates here.

Waters expressed hope that someday young filmmakers would make movies about big news stories the day that they happened, finishing their films by dinner and screening them that night. Certain realities about the time-consuming process of filmmaking render Waters’ vision near-impossible, but The Thing About Pam captures the spirit Waters was hinting at: true tragedies, fresh from the headlines, brought to life in the most heightened, absurd, tasteless ways imaginable.