Tight Bros From Way Back

On director Michael Winterbottom’s The Trip to Italy. 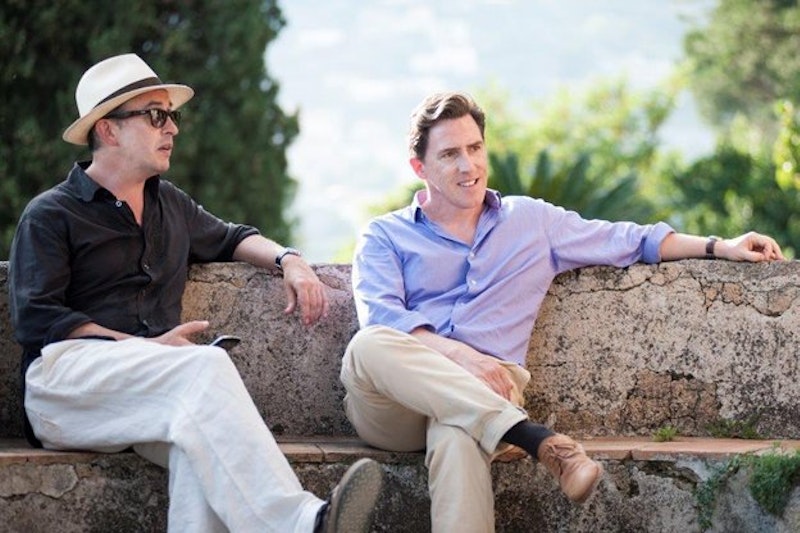 The bad news: I never caught 2010’s The Trip. The good news: having seen The Trip doesn’t seem to be much of a prerequisite for enjoying 2014’s The Trip to Italy. The premise is both paper-thin and laughably unimportant: The Observer commissions English comedian/actor Steve Coogan to drag his comedian/actor pal Rob Brydon along for a tour of various European restaurants for the sake of culinary journalism, or something, with director Michael Winterbottom filming.

The result, in this second film, is a sort of vaguely ribald mash-up of House Hunters International, Big Night, Food Network Television fare, and jazz-fusion road comedy as the pair tool around Italy in a Mini-Cooper, taking the piss out of one another, consuming obscene amounts of wine and food, singing along semi-ironically to Jagged Little Pill, and erupting into vicious, extended riffs. The Dark Knight Returns comes in for a major drubbing, and—unsurprisingly, given the setting—eerily accurate Al Pacino and Robert De Niro impressions abound. Bald-faced lies are peeled off like bills from the massive bankroll behind this operation (that we don’t see) and disproven in the blink of an eye. And, no, it doesn’t much matter what you ate before watching this, or how much: the food porn—the gourmet plating! the chefs massaging meats! the prim, genteel servers introducing the dishes in Italian! the courses that never seem to end—will have your mouth watering like a natural spring.

Coogan and Brydon are equally funny men, but given Brydon’s manic irrepressibility and penchant for absurdity and tomfoolery, Coogan, perhaps thanklessly, is relegated to the straight man. The rhythms of their improvisation vary from thicket-dense to startling in surprising ways, as when Brydon’s impertinent pretend dialogue with a preserved denizen of Pompeii—housed in a clear glass box—is extended for so long that it becomes painful to experience. The men’s dialects are sometimes porridge-thick and recorded for a distance, and for every 12 jokes it’s probable that I missed two entirely.

There are several subplots interwoven here—Brydon being a cad and scoring a role in a Michael Mann movie, Coogan wanting to be a better father to his son, or something—but these mostly struck me as extraneous. The point, as I see it, is the sense of a pair of celebrity pals portraying fictionalized versions of themselves both pretending to live life to the fullest while living life to the fullest: snapping smart phone photographs of one another at famous landmarks, reciting reams of romantic poetry, gaping as they’re led into opulent villas and take in gorgeous natural views—epic forests, sprawling beaches, clusters of ancient homes—that would cost most people a half year’s salary to afford to see.

The Trip to Italy is dishonest, but it’s less dishonest than something like Ocean’s Twelve, where famous people are paid handsomely to tool around Europe while barely even pretending to be other people. There isn’t the sense of true moment, but there isn’t the sense of having been conned; it’s as though you’ve shared a beautiful, extended daydream with a pair of perfect strangers.