Angela Bassett's back and Kathy Bates still has a totally confusing accent. 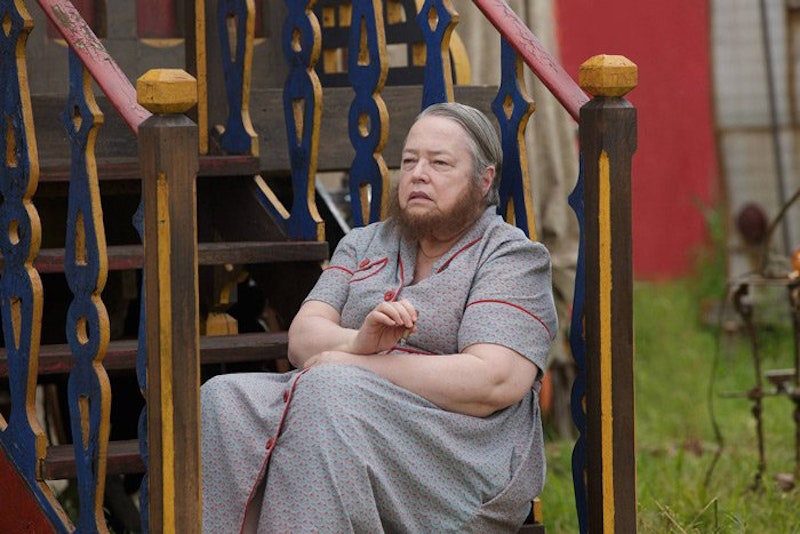 Things are beginning to pick up in Jupiter, Florida. With four unsolved murders, the police have established a citywide curfew which means bad business for Elsa Mars and her show. Also, with a cop missing the “freaks” are easy scapegoats for the police. Except, you know, they actually did it this time. The second episode of American Horror: Freak Show, entitled “Matinees and Massacres,” is lacking the fun of the past three seasons, but with the introduction of new characters it’s shaping up to be one of the most cohesive seasons of the anthology series.

• Bette and Dot’s entire existence in this show is a production marvel. If Sarah Paulson doesn’t win an Emmy this season there’s no hope for her.

• The show opens with Twisty the Clown massacring a toy shop owner and his spry bow-tied assistant who has left professional clowns in a flutter of anger. They claim the show is making the public afraid of clowns but John Wayne Gacy already beat Twisty to the punch.

• When Jessica Lange sang “Life On Mars” it was perfect because she is fucking Jessica Lange, but in this episode Paulson (as Dot) sings a cover of Fiona Apple’s “Criminal” and it’s starting to feel like a Glee spin-off. Do the writers even care that there’s no way a David Bowie song makes sense in a show set in the 1950s? I guess Ryan Murphy doesn’t give a shit.

• I’m sort of sad for Meep that he was beaten to death in prison, but he deeply disturbed me. It tests the empathy of an audience to have the first freak to go be a man who bites the heads off farm animals.

• Michael Chiklis is such a chode as the strong man I’m not sure why Mars agreed to have him join the show. Not only did he try to kill (what we can only assume is his son) Jimmy Darling as a baby, he also beats the crap out of him for trying to eat at a diner. I suppose he has a point that if the “freaks” go out in public, no one will want to pay to see the show, but he is not even trying to be chill.

• Angela Bassett finally makes her return to American Horror Story as Desiree who has “three titties, full blown lady-parts and a ding-a-ling.” She likes to have sex with gay men sometimes and watch her husband twist their neck around a few times.

• Dandy’s storyline of being a privileged boy who kills cats because he is “so bored” is so predictable that I saw it coming from the first introduction of his character. There’s no denying he’s fun, though, with his ridiculous hair and drinking liquor out of a nipple bottle. He tries to join the freak show because of thespian aspirations, but Jimmy Darling slaps him down. The next choice for Dandy is to follow Twisty back to his bus lair and join him in recapturing and torturing the two poor hostages, naturally.

• Does Kathy Bates’ character have any purpose yet except to confuse the audience as to where the hell her accent is from?

• The baby with claw hands flashback of Jimmy Darling as an infant is giving me Nip/Tuck vibes.

• Frances Conroy tries to buy Twisty the Clown and seems completely unperturbed by the fact he’s missing half of his face. Also, I want her entire wardrobe this (and every) season.

• Jimmy Darling tries to frame the strongman by placing the dead cop’s badge in his trailer, only to have the tables turn when the strongman frames Meep instead. It’ll be interesting to see the power struggle between the major players in the freak show.

• Elsa Mars’ jealousy motivates her to convince Bette that Dot is trying to steal her spotlight and keep her down, so she slips her a knife. How Bette could ever think killing half of the body she lives in would work is beyond me, but American Horror Story has never shied away from plot points that are outrageous (looking at you, alien subplot in "Asylum").

—Live tweet the show with me every Wednesday at 10pm EST: @ShawnBinder