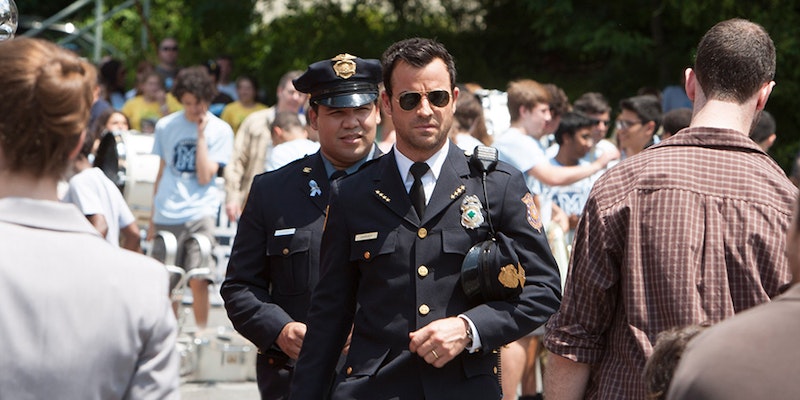 Damon Lindelof is no doubt best known as the co-creator of Lost, the hit sci-fi drama that premiered 10 years ago on ABC. Like many TV fanatics, I was hooked on Lost and—after marathoning through the first five seasons on Netflix—watched the last season with a kind of religious fervor; friends and I would get together every Tuesday night and sit, enthralled, drinking beer, absolutely no talking until the commercials—all will be explained. As it turned out, all was not explained, and I was just as disappointed by the finale as everyone else.

In retrospect, I think Lost fell apart after season four, when Ben spun the huge underground wheel and moved the island. After that it was just too much religious/metaphysical nonsense; unless it's Quantum Leap, there's only so much time traveling I can take. Every question answered raised five more, and by the end all anyone could talk about was the goddamn polar bear from season one—the Dharma Initiative was doing genetic experiments on animals, it was explained well before the finale; why did no one else get this?

I was fairly hesitant to watch Lindelof's new show, The Leftovers, the first season of which wrapped up in early September. The Leftovers, however, starts with the unexplainable: two percent of the world's population disappears, reason unknown. Jump ahead three years and you have a show that's not about what happened—The Leftovers, at least in its first season, never attempts to answer that question—but how everyone who's left behind is dealing with it; the ATF, for example, is now the ATFC (The Bureau of Alcohol, Tobacco, Firearms and Cults), owing to the huge rise in religious fanaticism in the years since the "Sudden Departure." In the premiere, we meet two such cults: the Guilty Remnant, who dress in all white and take a vow of silence, and the followers of "Holy Wayne," a black mystic who offers redemption and, if you're an attractive young Asian girl, a bed.

The Leftovers focuses on a family from Mapleton, NY. Kevin Garvey is the town sheriff; he took over for his dad, who went crazy sometime after the Sudden Departure. He lives with his daughter, Jill, who like all the other teenagers is a disillusioned mess—a scene from the premiere shows a high school party with an iPhone spin-the-bottle-type game that includes options like "Fuck," "Burn," and "Choke." (Yes, we get to watch Jill unenthusiastically choke a friend as he jerks off.) Kevin's wife, Laurie, has joined the Guilty Remnant, and her son Tom is helping Holy Wayne.

Unlike Lost, there're almost no flashbacks. However, there's plenty that's unexplained. Mapletown's dogs have turned wild since the Sudden Departure, hunting in packs; there's a lot of symbolism involving deer; Holy Wayne may or may not have real powers; Kevin has terrible nightmares and does things in his sleep that he can't remember—his dad promises him he’ll find answers in a 1970s issue of National Geographic, and he may be right. None of this is resolved, but it doesn't matter. Unlike Lost, we're not desperate for answers, merely reveling in the strangeness. No one in the show actually knows what’s happening, why should we?

There are wonderful performances here, particularly from relative newcomer Carrie Coon, who plays Nora Durst, a woman who lost her husband and two kids in the Sudden Departure, but continues to buy their favorite cereals and keep their CDs in the car stereo, as well as Ann Dowd, who plays Patti, leader of the Guilty Remnant, and manages quite a lot for a character who’s taken a vow of silence.

The Leftovers is based on a novel by Tom Perrotta, and Lindelof has managed to mostly exhaust all 300+ pages in just one season—though there were fairly stark differences anyway (or so I’ve read). Luckily, Perrotta is an executive producer on the show, so I hope he’ll steer Lindelof in the right direction. Either way, season one is heartbreaking—the finale left me stunned; the start of the fifth episode, which features the stoning death of one of the Guilty Remnant, is the most brutal thing I’ve ever seen on TV; Peter Berg and Mimi Leder, in particular, offer wonderful direction. The show takes risks, and that’s important.