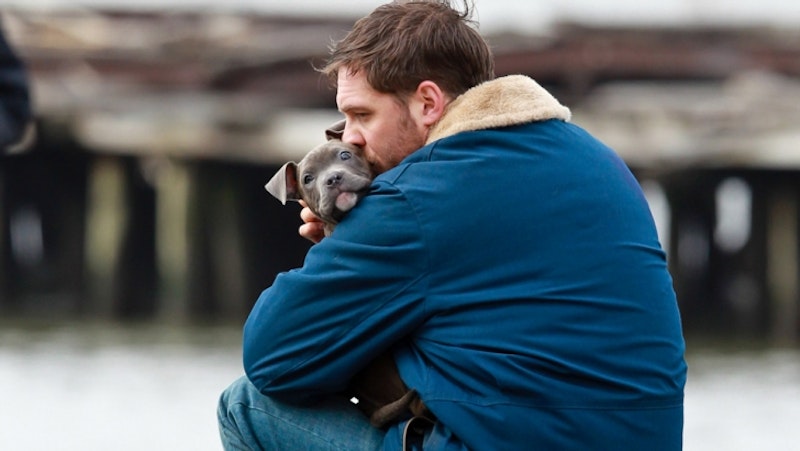 As The Drop begins, watch Thomas Hardy’s eyes. Take in his face. Read him, or try to. It’s a tricky thing, doing this, because the character Hardy is playing—a Brooklyn bartender named Bob Saginowski—is almost an enigma, a nervous admixture of guilt, sadness, blankness, deference. Watch him, hunched and haunted in a soaring, filigreed Catholic cathedral, refusing communion. Watch him, saving a beaten pit bull and nursing it back to health with Nadia (Noomi Rapace), the girl whose trash can he found it in, pretending he doesn’t notice the vicious scar on her neck. Watch him tend bar, simultaneously present and removed. Watch him hold court with his cousin Marv (James Gandolfini), who runs Cousin Marv’s, the bar where Bob works. Bob, it would seem, is little more than a wounded simpleton who has resigned himself to a life of slinging drinks and serving beers.

Maybe, or maybe not. The Drop complicates that idea by linking Cousin Marv’s in a string of area bars owned or controlled by a Chechen mafia for the purpose of using different bars, on different days, as drop locations for illegally acquired cash. Envelopes of green find their way into the bar through the course of the day and are collected by a bagman, late in the evening. Early on, director Michael R. Roskam builds a mood with indifference: the phantom of a long-dead associate whose cause of death and killers are hazy, Marv’s resentment at being under the mafia’s thumb, Bob and Nadia bonding and sort of sharing custody of the pit bull as an unshaved stranger in a ball cap watches them from a remove, the camera lingering on a boiler in Bob’s basement. When a suspicious Detective Torres (John Ortiz) sniffs around after two masked hoods stick the bar up on a non-drop night, the plot kicks into full gear.

(I should note that while this is a heavy movie—people die, sometimes in painful ways—it has a definite sense of (black) humor, highlighting Bob’s oafishness, Eric’s passive-aggressive idiocy, Marv’s sneering “fuck you” ‘tude, and a bemused dissonance between the codes of the underworld and the straight world. You withhold some details from the cops; the cops drink the hard stuff while on duty.)

To say much more would risk spoiling the picture—and, what a picture this is. Gandolfini’s Marv is gruff, bitter, and self-centered, a former bookie gone to seed; there’s a great, high-wire car scene where he plots with another character that reminded me of the Chris Tucker/Samuel L. Jackson scene from Jackie Brown. Rapace turns her wary, coiled Nadia into a wonder of emotional economy; the depths of Hardy’s Bob are revealed, over time, even if his accent is too mush-mouthed to be taken seriously. Matthias Schoenaerts emerges late in The Drop as Eric Dees, the sort of menacing, extortionist psychopath we expect all schoolyard bullies to grow up to be; Ortiz plays his role like a card sharp with a conscience. But the character that looms largest over The Drop, inarguably, is the borough of Brooklyn: its neighborhoods, its backstreets, its parks, its interiors. The insularity of the movie’s world is at first quaint, and by the end, oppressive, as Roskam and screenwriter Dennis Lehane (who wrote the novel this script was based upon) knit the fabric of the tale into an unofficial imaginary of a fictional time and place—where to be on the wrong side of the wrong people at the wrong time could result in you vanishing without a trace.