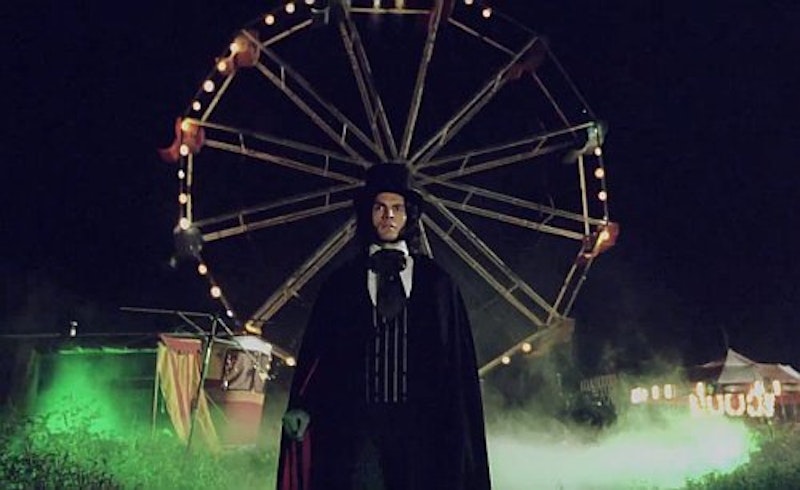 • Finally, my sweet Emma Roberts returns to American Horror Story. It’d be impossible for her character this season to top foul-mouthed Madison Montgomery, but my first impressions of her as Esmeralda (a con-artist protégé of Denis O’Hare’s character) are good. You can tell her character will be kinder this season as she attempts to infiltrate the Freak Show to acquire bodies. She’s giving me serious That’s So Raven vibes this season and I’m living for it.

• Dandy is quickly becoming the most interesting character this season. This episode has him threatening to stab the maid as well as telling his mother how much he hates her after she buys him a costume he doesn’t like. Dandy represents the entitlement so many young people feel, and how dangerous that can be. His hairstyle might be what is making him so terrifying, though. Best line of the episode, “Curfews are for the poor people.”

• We’ve finally discovered that the confusing accent Kathy Bates is attempting is a Baltimore one, so I guess... mystery solved? This episode her character Ethel Darling finally gets explored. Ethel finds out that her intense drinking has left her with cirrhosis of the liver, leaving her at most a year to live. She cries to her doctor because he’s the first medical professional to ever treat her with respect. She cried, I cried, we all cried.

• Bette has a terrifying dream that she and her sister, Dot, are torn apart, only to have her tell Dot that she’s going to work hard, save her money, and make sure that surgery becomes a reality, even if it means one of them is going to die. Fucking harsh, girl. I get that you’ve sung a Fiona Apple song and you’re feeling like a diva but chill.

• The performers refuse to work on Halloween due to Edward Mordrake, a two-faced aristocrat in the 1800s whose other face told him to murder people. The flashback scene was a production delight, showing the terrible story of Edward in B&W glory. Legend has it that if you perform on Halloween Edward will be summoned to take another soul as part of his creepy dead circus troupe.

• Really digging all the scenes between Evan Peters and Emma Roberts. Probably because they’re dating in real life, but also because this season is looking like it will feature a love square between Bette, Dot, Esmeralda and Jimmy.

• Pretty sick of hearing people sing on American Horror Story. This week Jessica Lange sings “Gods and Monsters” by Lana Del Rey and I didn’t enjoy it. I love Lana because I’m a sad gay boy and I love Lange, but it’s starting to feel like a Glee spin-off. Of course this song summons the very mysterious Edward Mordrake to the freak show.

• By far the creepiest scene in this episode is between Dora and Dandy. It played homage to the original Halloween’s opening murder scene and was extremely unsettling. You know Dora’s days are numbered, even though she is fabulous and tough as hell.

• Denis O’Hare plays a man with a 13-inch dick. It seems like an unnecessary plot point at this stage in the season, but I guess we’ll see where it goes.

• Twisty the Clown takes another prisoner this episode, which further begs the question: How does he decide who lives and who dies? Ryan Murphy has said that in the next episode viewers will see a 15-minute scene that explains Twisty’s origins, so it’s safe to say I probably won’t sleep well next Wednesday night.

• Easily the strangest scene is between Edward Mordrake and Kathy Bates’ character. She explains that when she was pregnant with Jimmy, Michael Chiklis (The Strongman) had people pay to see her give birth. There is so much of Bates’ crying this episode my heart is breaking.

—Live tweet the episode with me every Wednesday at 10pm EST: @ShawnBinder