3-D technology is nothing new in the movie industry, but it's only recently become artistically and commercially viable. 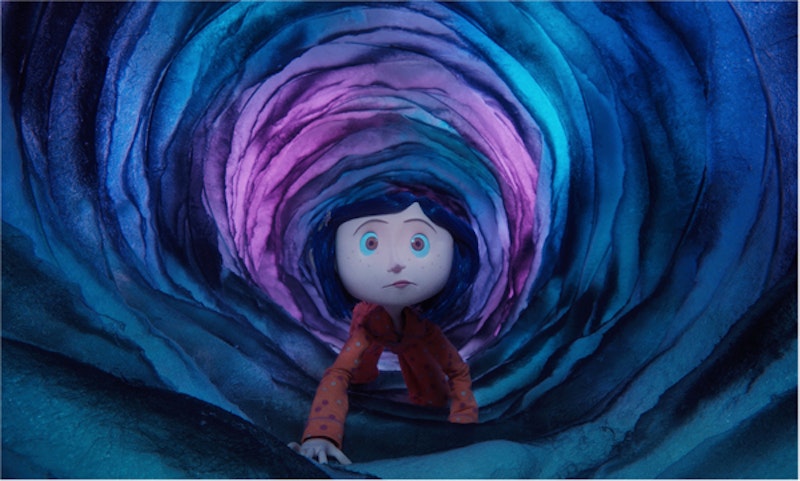 With commercials depicting courageous audiences dodging flames, fireworks, and mechanical apparatuses emerging from ordinary movie screens, the 3-D craze is back again. Throughout most of the 1980s and 90s the format was largely relegated to amusement park attractions and the occasional nostalgic revival of past three-dimensional features. But lately, renewed interest in the presentation style has raised questions over the medium’s artistic and commercial validity.

The brief early 80s resurgence, which encompassed the third installments of the wildly successful Friday the 13th, Amityville Horror, and Jaws franchises, and the occasional low-budget curiosity like Comin’ At Ya!, showed a marked technological improvement over the 3-D films of the 50s and 60s. The then-new “polarization” process both reduced the eye strain associated with the early anaglyph (using red-and-blue colored lenses for audience members) images and increased the net effect: objects would fly at the viewer’s glasses (which were now similar to ordinary, clear prescription lenses), colors were less likely to be drained and muted, and the 3-D image was flawless unless one were to tilt his or her head. This last issue would later be resolved with the circular (as opposed to linear) polarization process currently seen in the RealD presentation.

Interest in this format soon declined, however, with the growing popularity of home video, as the effect could not be satisfactorily reproduced in a home theater environment. Also, the gimmicky nature of the films, in which objects were typically hurled at the screen or placed in the foreground for little reason other than to make use of the technology, soon met with disinterest when it became clear that the exciting new advancements were limited in utility. Gradually the format was associated with every other failed fad and no studio wanted to produce films that were closer to geek shows than commercially and critically viable features.

The technology hasn’t progressed much in the past 25 years, though the proliferation of digital theaters and IMAX screens has increased the clarity and impressiveness of such images. And artistically speaking, critics and discerning audiences alike haven’t exactly been pushing for many awards. In addition to Disney-endorsed concert films aimed at family audiences, the RealD format has been used for one generic horror remake (My Bloody Valentine 3-D) that otherwise would have drawn next to zero interest and a below average Dreamworks computer animated film, Monsters vs. Aliens. Many of the films that have been released in 3-D use the technology to spark interest in otherwise average and forgettable ventures.

One notable exception is the stop-motion animated film Coraline, based on the successful novel by Neil Gaiman. While there is no shortage of scenes that make flamboyant use of the 3-D presentation, with robotic appendages reaching out to the viewer and a tunnel to an alternate reality appearing to surround the audience, most of the effects are subtle and low-key. Atmospheres and settings possess a significantly increased degree of depth than they would in a 2-D presentation, and the film is less of a showy spectacle than an engaging work with a palpable visual texture. Of course, it doesn’t hurt that Coraline also has an inventive story and well-written characters, in addition to being appropriate and compelling for a variety of age groups and demographics.

Sure enough, while Coraline may not have had the spectacular opening something like Monsters vs. Aliens had, it had real staying power and was a certifiable sleeper hit once word-of-mouth continued to draw theater-goers into its rich and darkly-tinted world. The film had unique-yet-humble aspirations, with a small-scale advertising campaign that largely targeted fans of Gaiman’s novels and comic books. Coraline wasn’t intended to turn the movie world upside-down, but the movie’s critical and commercial success will have an effect on future 3-D films more significant than anyone could have foreseen.

Unfortunately, producing and marketing a 3-D film will continue to require the sort of money that only major studios will be able to front. Historically, these studios have put projected box office gross ahead of artistic value, but in the case of 3-D films this may not be the case for much longer. It would be naive to expect an impending phase of adventurous and experimental head-trip films in 3-D but if more films along the lines of Coraline, with modest budgets and far-reaching appeal, are accepted as wise investments by studio—something that will net a respectable theatrical release and possibly even awards other than Best Special Effects—then maybe the format will continue to be used in more interesting and creative ways.

Marketing firms are quickly realizing that modern consumers have become increasingly savvy about the old “shock and awe” methods of advertising, hence the increase in “viral” methods that rely on fan-based communication and small amounts of information released in order to gradually pique interest in upcoming films. What was once considered a gimmick may soon help change the way we think about passive entertainment and opportunities for artistic endeavors.