State of Play is so filled with reverence for the print media that its characters barely make sense. (Grade: C+) 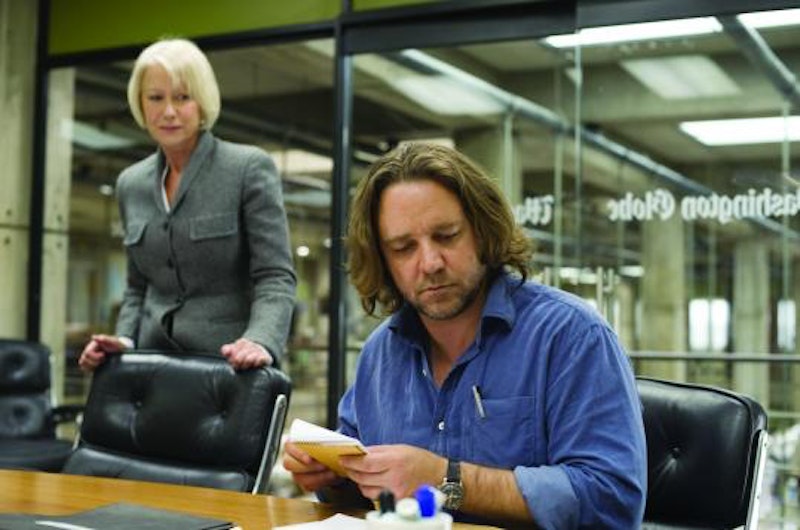 I tend to agree with New Yorker critic Anthony Lane that, whenever possible, a reviewer should see a film “in the company of ordinary human beings,” not at a press screening. Yet it’s hard to imagine a better environment than a press-only showing in which to see State of Play, the new nominally political thriller from Last King of Scotland director Kevin MacDonald. As has been widely reported in the film’s reviews, State of Play’s end credits roll over a montage of printing press footage, set to CCR’s “Long As I Can See The Light,” and the mood in our midsize theater was indeed different than any moment I’ve experienced with these people. No one got up to leave until the lights went up. No one even put their notepad in their bag. And even this reviewer, who writes for an online-only publication and hasn’t bought a newspaper in nearly two years, felt the intended pang of loss as MacDonald saluted a technology that’s on the way out.

Problem is, State of Play presents such a romanticized depiction of the print media that it obscures the actual effects of the news industry’s ongoing changes. It also, by virtue of its rogue-reporter-against-shadowy-conspiracy plot, cannily ignores one of the many reasons why print’s in trouble in the first place; MacDonald and his screenwriters make it seem like the Internet showed up in 2006 to bully old-school knights out of their jobs, when the truth is that the “threat” has been around for over a decade, and the 2008 recession only hastened an industry-wide financial meltdown that publishers should have seen coming.

The tempting comparison to draw is of course Alan J. Pakula’s era-defining (yet overlong and narratively unsatisfying) Woodward and Bernstein epic All The President’s Men, yet State of Play’s conspiracy feels more like The Parallax View, Pakula’s earlier tale of press bravery. Like Parallax, MacDonald’s film opens with a bit of suspenseful gunplay and concerns fictional corporate wrongdoing, not actual government conspiracy. But Warren Beatty’s heroic journalist in the Pakula film made sense in the Watergate cultural landscape, while State of Play’s complicated hero, played well by Russell Crowe despite some lame writing, has the added burden of representing a now-bygone era. This only complicates an already overstuffed plot.

Crowe plays Cal McAffrey, a guy who drives a decades-old Saab filled with candy bar wrappers and knows exactly how to finesse the D.C. police chief into giving him information. When a young homeless man and an aide to his ex-roommate, Congressman Stephen Collins (Ben Affleck), die on the same day, Cal finds that these two ostensibly unrelated crimes are in fact linked, and part of an expanding web of corporate-political intrigue that’s big enough to require the reporting help of young blogger Della Frye (Rachel McAdams). (Notice how these names hearken back to an older era of newsroom movie, from His Girl Friday to Ace In The Hole.) Cal, a diehard newsprint man, is at first resistant to his editor’s (Helen Mirren) insistence that this juvenile blogger be allowed to share his territory, but he soon caves after seeing her genuine journalistic interest. Their platonic, father-daughter relationship is one of the script’s highlights.

But before we even get to the political nastiness at the heart of State of Play, the filmmakers set up their newsprint/blog dialectic too forcefully. If Cal’s the same age as Gulf War vet Stephen (a relationship that, given the men’s different temperaments, seems unlikely from the get-go), that makes him about early- to mid-40s—so what’s he doing writing his stories on what looks like a Mac LC II? He’s a prime candidate for Blackberry ownership, and even if he’s resistant to all the new digital fooferaws of his trade, he wouldn’t be allowed to type his articles on whatever DOS-era word processor he still uses. Likewise, Mirren’s hard-ass editor wouldn’t dream of assigning this guy to the story in question; not only is he the ex-roommate of the biggest name therein, he’s also had an affair with that man’s wife (Robin Wright Penn), who spends the film reeling from the news that her husband was sleeping with the murdered aide. Cal’s renegade bonafides are slathered on so thickly that he seems more like a guy who’s lucky to still have a job than the saintly elder statesman we’re asked to accept him as.

State of Play is well made and well plotted, even if the romantic entanglement between Cal and Mrs. Collins adds an unnecessary level of conflicting interests. (Between Cal’s paunch, his whiskey habit, his messiness, his lady problems, and his questionable journalistic ethics, the screenwriters try too hard to convince us that we’re dealing with a real guy with, you know, real problems.) The film’s stacked with dependable actors, all of whom do well with roles that are straight out of Newsroom Conspiracy central casting—the young go-getter, the steely editor, the smug corrupt politician (Jeff Daniels), the humorless inside source (David Harbour), a couple snarky, slovenly fact checkers, et al. Jason Bateman shows up in the final third and finally injects some humor into the proceedings as a PR flack in over his head, but for the most part MacDonald builds his suspense well and keeps things moving along.

The last half-hour of this film, however, is a disaster. Not only does one final, unnecessary twist get thrown into the conspiracy, but the screenwriters commit their most egregious offenses against a realistic depiction of contemporary journalism. After delaying the print deadline interminably so Cal can break the last switcheroo, he comes back to the office to write his long, detailed front page story in about 20 minutes, while everyone watches the brave man work. He then sends it off to his editor without even so much as running a spell check. And earlier, when he asks Della if she plans to run the story on her blog, she responds that "some stories are meant to be read with newsprint on your hands."

This is about as pure a line of horseshit as we’re likely to hear in the movies this year, and completely unreflective of how news actually breaks in our current society. It’s horrible business—not to mention bad journalism—for the paper not to run Cal’s story online immediately. It’s true that the shift from print to online reporting deprives readers of a certain romantic tactile thrill, but that’s the price you pay for the more valuable ability to disseminate news more quickly. State of Play’s writers labor to convince us that Cal is an imperfect man, but they overlook the fact that his journalistic methods are disappearing for a reason.