Save Journalism and This Homeless Guy

Do your duty and see The Soloist. 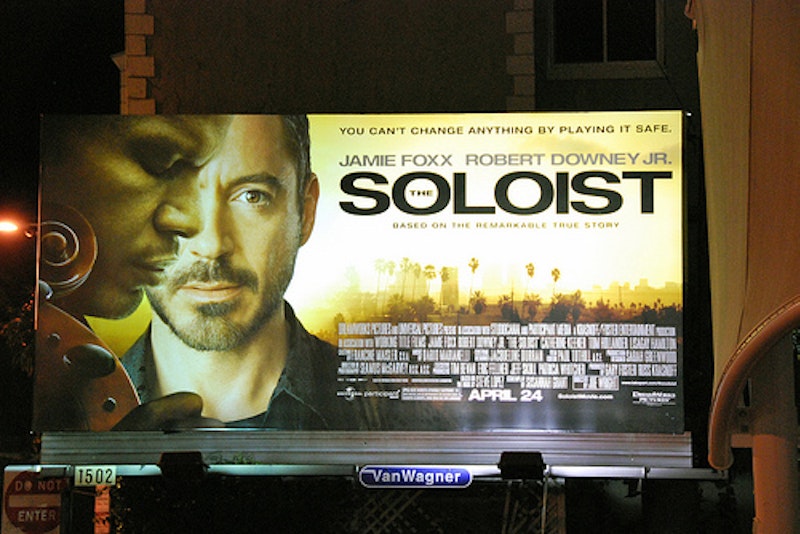 Here in Philadelphia, it feels like The Soloist has been on our minds for months. Los Angeles Times reporter Steve Lopez’s book has been this year’s “one book, one Philadelphia” choice—citywide book club—and so the movie has enjoyed a sustained manufactured buzz campaign.

Imagine my surprise then when I walked into the theater for the advance screening and it wasn’t even full. Foreseeing a Slumdog-like bonanza, I’d arrived extra early, but my friends and I got a seat without so much as a quibble. Part of this was location (they picked a theater farthest from Philadelphia’s African-American community), but part of it is about the movie itself: The Soloist is one of those movies you don’t really want to see. You feel you should see it, so you go and do your duty. Maybe this is why the distributor delayed its release twice, pulling it out of last year’s Oscar race. Times are tough and no one wants to spend two hours watching a homeless guy.

The Soloist turns out to be a fine movie, one that could have earned Jamie Foxx an actor/supporting actor nomination—it may still—but one that, the morning after, fails to inspire much more than quiet reverence. Like State of Play, it is a film as much about the newspaper as its sources, though it is mostly concerns our society’s demands to see individual talent rewarded with an apartment and stable livelihood, rather than on the street playing for hobos and passers-by, who apparently really need classical music.

The writing, adapted from Lopez’s book based on his “reporting” of homeless cellist Nathanial Ayers (Jamie Foxx), is mostly solid. Ayers, who attended Julliard before dropping out in the 1970s, sounds as funny as he is insightful and haunting, despite having some form of schizophrenia. His endless streams of dialogue offer up hard-to-believe quips and wise nuggets of truth like, “I used to sleep on Wall Street but it was too dirty” and “God is on the other side of that wall.” Steve Lopez (Robert Downey Jr.) on the other hand writes for a living, so we expect his lines to be good. He narrates the movie through the columns he writes for the Times, which allows the director to class up the film with some semi-pompous language.

Downey’s Lopez is lonely, nearly homeless himself. He’s unshaven. He hasn’t unpacked his fancy L.A. home. There are two incidents of him covered in urine. He’s a rich, lonely hobo, which makes him perfect for Ayers and fits into a nice narrative about how Ayers changed him, not the other way around: “To be there with him [listening to an orchestra for the first time in 30 years] like that…I’ve never loved anything the way he loves music.” Kind of cheesy.

Of course with the LA Times going down in flames he might be a hobo soon. Throughout the film we see reporters leaving the office with boxes and editors delivering exit packages. Unlike State of Play, this isn’t an exaggeration. The Tribune Company really was gutting the Times then. Yet while State of Play has an argument that journalism needs newspapers for expensive, source-heavy reporting, it’s simply untrue that long-form human-interest stories like the “homeless Julliard alum” are in danger. That’s crazy; it’s cheap and entertaining reporting.

Director Joe Wright, whose Atonement was one of the most crisply and assuredly directed Hollywood films of last year, does a fine job too. Yet I agree with some critics that his slick style might have detracted from the film’s emotional rawness—I didn’t see anyone crying. He does a good job bring home core themes: the solitariness of bourgeois life versus the communal—though horrible—nature of the street; how Ayers’ schizophrenia is made worse by his racial difference; the juxtaposition of high culture with Los Angeles. At times Wright lays it on too thick: when Ayers plays a good cello for the first time, his camera follows pigeons from Skid Row as the fly around the city like doves. But he gets points elsewhere, especially in his visual and aural presentation of schizophrenia.

So The Soloist will not blow you away, but it won’t bore you either, which is the real danger in sentimental movies like this. Without a grander story, director Joe Wright’s technique is underserved, making the only draw Jamie Foxx, who assured me once again that he actually can act. After The Kingdom and Miami Vice, a guy can forget.