The Way We Were

Waltz With Bashir and Fanboys concern memory’s affect on us, whether traumatic or joyful. (Grades: B+/B+) 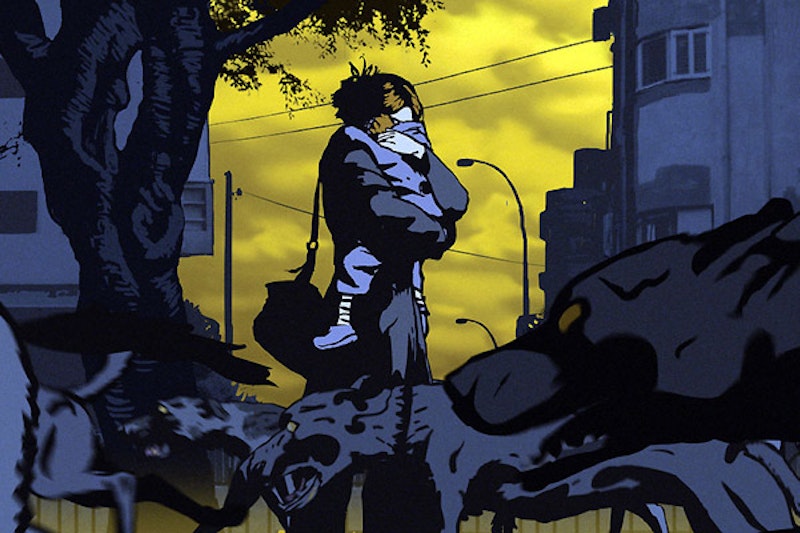 The Israeli film Waltz With Bashir is haunting, violent, and frequently surreal, yet I was never as moved or amazed as I kept expecting to feel. Though it flows from recollected sections bathed in warm yellows to contemporary interview scenes that look more washed-out, Bashir is animated throughout in a heavily outlined, vaguely digital looking motion-capture style that resembles Richard Linklater’s Waking Life. Like that film, Bashir is incredibly talky, sometimes distractingly so, yet it does have moments of undeniable poignancy and visual beauty. The director, Ari Folman, voices his own character, who interviews old Israeli army colleagues in an attempt to remember something, anything about his experience in the Sabra and Shatila massacre during the early-1980s war with Lebanon. The result is a very creative mixture of political history, filmed memoir, and dreamlike imagery, yet I’m forced to conduct my own version of Folman’s self-triage—wondering, for example, how a movie this rich with history and visual surprises left me so unaffected.

Part of it is the form; by giving over his film to voiceovers by Post-Traumatic Stress Disorder victims, Folman necessarily renders the whole thing slightly narcotizing. These are men who have, like any combat veteran, witnessed unbelievable carnage and are understandably monotonal when recounting it. But when coupled with Max Richter’s underwhelming score and the animation’s limited color palette, these voiceovers seem more emotionally distant than the material deserves.

The animation itself is of course the other, much more effective, distancing mechanism of Waltz With Bashir. Any stylized depiction of atrocity risks the same queasy-feeling romanticization that Folman skirts here, but his plangent tone and art director David Polonsky’s inspired attention to detail deflect any reasonable charge of the kind. Rather, the film’s animation renders the subject matter and violence just foreign-seeming enough that we don’t simply glaze over sights that we see nearly every day on the international news. And the more visually unique scenes—a recurring shot of flares falling on Beirut and a separate dream sequence involving a giant amphibious woman, in particular—are often so epic and evocative that I wished they visual and verbal accompaniment to match.

Politically, Folman also deserves credit for comparing Israel’s complicity in Sabra and Shatila to the genocide inflicted on Jews a generation earlier. I find the comparison slightly ludicrous, but Folman’s conviction is admirable and his argument is cogent and brave; needless to say, this is not a popular argument in Jewish discussions of the Middle East.

So I have little but superlatives for the concept, art direction, and general moral tenants of Waltz With Bashir, which is why I feel nearly apologetic for admitting that it struck me as merely good. Perhaps the general concept of art about war and remembrance, complete with tearful reflections and depictions of genocide, just isn’t doing it for me right now. Likewise, Bashir’s hazy dreamscapes, while well suited to the film’s psychological themes, just aren’t the preferred kind of trauma depiction for this moviegoer. I prefer the more visceral, if no less stylized, faux-documentary methods seen in The Battle of Algiers or Peter Watkins’ brilliant 1960s films The War Game and Culloden. Or, for a fairer comparison, Marjane Satrapi’s stunning animated version of her comic Persepolis, which summons more paranoia and wartime panic than Bashir despite being significantly cartoonier and less colorful. That cartoonishness, in Satrapi’s case, was really just irrepressible artistic vibrancy, and I found those characteristics more affecting and horrifying than Bashir’s relatively austere tone.

No doubt that preference says more about me than either of the films in question, and while horror, austerity, and genocide couldn’t be further from the surprisingly great comedy Fanboys, director Kyle Newman and co-writers Adam F. Goldberg and Ernest Cline certainly understand the way we look to pop culture for self-definition. Their road trip movie concerns a quartet of old friends (one of whom has nearly turned his back on the permanently adolescent crew) who, in 1998, travel cross-country to Skywalker Ranch in search of a pre-release copy of The Phantom Menace to show their buddy before he dies of cancer. But in its own crude way, Fanboys is just as much about memory as Waltz With Bashir, only Goldberg and Cline explore the kind of memories that we exaggerate constantly in our own minds and revisit periodically for inner balance—our memories of pivotal experiences with art.

I went through an obligatory Star Wars phase as a boy, and certainly the greatest moments of Fanboys stem from in-jokes about the greater Lucas universe, but the film’s sentiment is one that any movie fan—any culture fan at all, really—should be touched by. In a scene where the boys, by this point joined by their foxy she-nerd group member (Kristen Bell), find a shrine of Star Wars props and costumes inside Lucas’ ranch and all silently flock to separate memorabilia—a lightsaber, Princess Leia’s bra-less Tatooine robes, a model of the Millennium Falcon—Fanboys poignantly addresses the way we all look to pop culture for self-identity. This is deeper, as the movie also shows, than simple fantasy enactment; the communal experience of something like Star Wars is as important as any individual reaction, which is why this road trip necessarily has to be taken with friends. The five pilgrims may find their own meanings in Lucas’ imagery, but they enter the room together before splitting off.

Fanboys is a defiantly sophomoric movie, and a niche film by design. But Newman and his collaborators set out to make a paean to Star Wars and the nerds who worship it, and they have made just about the best possible version of that movie you can make, complete with reenactments of iconic scenes, cameos from Billy Dee Williams and Carrie Fisher, a running gag involving a rivalry with Trekkies, and even the original sound effects of the classic films, licensed gladly by Lucas himself. You will know from the trailer whether or not Fanboys is your kind of movie, and if it is, you will not be disappointed. Newman & Co. use the horny, dorky veneer of Fanboys as a Trojan Horse in which to smuggle the central idea of Waltz With Bashir: “Films can be therapeutic.”