Anyone who loves film ought to see Criterion’s recent transfers of The Exterminating Angel and Simon of the Desert. (Grades: A/A) 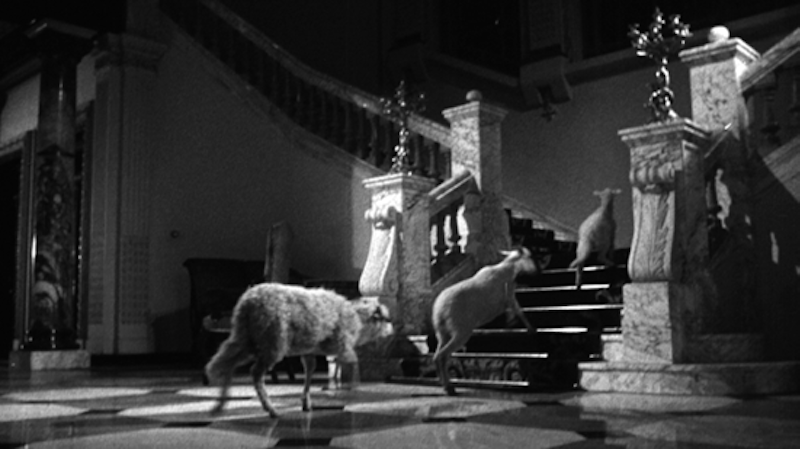 David Denby’s been making the rounds recently to promote his new book Snark, and inevitably each interview devolves in to the same game wherein the host names a current writer or pop cultural entity and asks Denby to decree: Snark or Not? Denby’s general tack is that snarky talk has no “civic virtue” (his term); that it aims purely to deride without offering a positive alternative to the object of its scorn. It therefore stands in opposition to satire, Denby claims, which implicitly argues for cultural betterment by mocking its opposite. For anyone confused by Denby’s semantics, or for anyone wondering why this distinction matters, I submit the films of Luis Buñuel, the best examples of which are simultaneously scabrous, hilarious, and humane. Two of the Spanish director’s golden-age films have been recently reissued by Criterion, and The Exterminating Angel (1962) and Simon of the Desert (1965) are essential examples of satire done right. They form a double feature of pitch-perfect social critique as entertaining as it is judgmental.

Buñuel is best known for his constant cinematic attacks on wealth and religion, so these two films are also a perfect introduction to his surreal black comedy. In The Exterminating Angel, the guests at a mansion-set dinner party somehow forget how to leave, resulting in starvation and unrest that spills out into the greater community. The protagonist of Simon of the Desert is an ascetic monk who devotes himself to praying on a 30-foot pillar for eight years, only to be finally wooed by the devil into modern-day Babylon and surprised by the banality of sin. But as this is Buñuel, the plot summaries only hint at the guiding ironies of his films and can’t express the steady supply of indelible images, or the beautiful photography of Gabriel Figueroa, or the dizzying humor of the work itself. These are beautiful films, and great fun in addition to their intellectual merits.

Of the two, Simon is less well known, since it’s only 45 minutes long. But this is by no means a minor work; it’s the equivalent of a great short story from a brilliant novelist, a distillation of the director’s thoughts on Christianity and religion in general. Like all of Buñuel’s characters, Simon (Claudio Brook) is oblivious to the giant jokes that swirl around him. The monk’s scraggly beard and vacant, dehydrated stare remain constant even as Satan (improbably played by the gorgeous Sylvia Pinal) shapeshifts and visits various curses upon him. He resists admirably—not once are we asked, despite Buñuel’s clear skepticism of religion, to view Simon as a rube or an idiot. The situational humor may be at his expense, but the larger joke is on piety itself; through his striking imagery, Buñuel shows what a pity it is for a man of Simon’s willpower and resolve to waste those qualities on a belief system that belittles him so. The director’s satire doesn’t merely laugh at religion, it instead poses a question: Is this the best life that a faithful man can expect?

Similarly, the image of a dozen-odd members of the leisure class suffocating in their host’s banquet hall is as pungent a sample of Buñuel’s class satire as you’ll find anywhere. Yet these men and women are not dummies; they are, like the mansion’s house staff, a group of individuals held captive by a collective mindset. None of them bothers to get up and leave the party at an appropriate time, and this small hiccup of social grace disrupts the entire crowd. One tiny tear in expected decorum, Buñuel argues, and the entire empty semiotic system we call “society” can devolve into a broken down mess.

Buñuel mocks systems, not people, which is why his films, despite being occasionally, purposely offensive, don’t really have villains. Even Satan is shown to be, at worst, a bit shallow in Simon of the Desert. Most of Buñuel’s characters are like the rich family in his episodic, penultimate film The Phantom of Liberty, who sit on toilets at the living room table and excuse themselves to go eat in private. That sequence, like most of Buñuel’s work, reorganizes the slightest superficial element of modern life and, by humoring us with the resulting image’s silliness, forces us to examine the existing silliness in our society. It’s only accumulated cultural custom that forces us to eat in one place and shit in another, just as it’s only accumulated religious ritual that convinces Simon to reject carnal pleasures in search of some unseen reward. Buñuel holds our own behavior up to us and asks whether or not any of our unquestioned social mores actually better anyone’s life.

This is satire, but it’s edifying as such. The Exterminating Angel, like the director’s great 1972 farce The Discreet Charm of the Bourgeoisie, presents a roomful of sophisticated, well-educated adults who are nevertheless incapable of group action. These are full characters, who look and act like real, if farcical, people, but who have given themselves so entirely to a social system that they aren’t even aware how flimsy, how easily dismantled, that system is. They also resemble the hapless couple in Buñuel’s early collaboration with fellow Spanish surrealist Salvador Dali, L’Age D’Or, who spent that film trying desperately to make love but are interrupted by social functions, religious obligation, a foreign military blunder, and other symptoms of civilization. And just as L’Age D’Or began ironically with documentary footage of scorpions, The Exterminating Angel’s cast watches hopelessly as a pack of goats and a bear walk freely through the mansion they can’t leave.

The image of a bear swinging from a chandelier is, in or out of context, a striking one; Buñuel’s critiques are powerful precisely because his moral rage and creative genius work in tandem. This is why his movies, rather than seeming didactic or systemic, sometimes feel like bursts of pure anarchic joy, like visually brilliant episodes of Monty Python’s Flying Circus. The vision of humanity on display in Simon of the Desert and The Exterminating Angel is one where people imprison themselves in the very systems they look to for meaning, yet there’s no cheap tragedy in either film. Buñuel excels at documenting our best efforts to make life harder than it needs to be, yet he seems to agree with the partygoer in The Exterminating Angel who drily observes, “Life is amusing and strange.”

Simon of the Desert and The Exterminating Angel are both available now from Criterion.