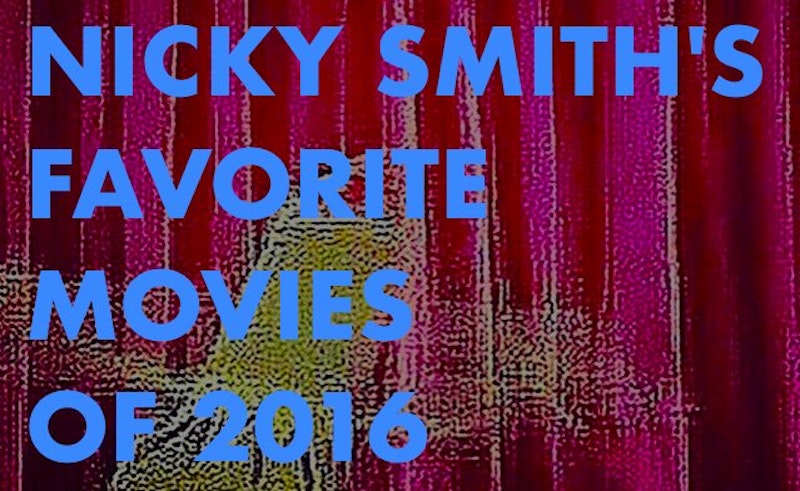 I kept a journal of every movie I saw theatrically in 2016. The best ones were revivals: Chinatown, Blood Simple, and Blue Velvet in particular. My family has a ritual of going to the movies every weekend at least once, no matter if it’s crap or crimson on offer. There are always so many more dry spells than hits, and of course most of films listed below came out in the last couple months, but I kept a short list all year and was more diligent about getting to the theater than ever before. If I have FOMO about anything, it’s about missing a first run movie in a theater. Even though I saw it twice in 2008, how long will I have to wait to see Synecdoche, New York again in a theater? Another five, 10 years? How long has it been since PSH kicked it? Three years? Christ.

1. Nocturnal Animals: The best movie I saw in a theater this year was a revival of Chinatown, and Tom Ford’s Nocturnal Animals reminded me a lot of Roman Polanski’s 1974 LA noir masterpiece: grand, violent, vindictive, personal. More importantly, it’s a big neon “Fuck You” to jaded overpaid whores in the art world making millions off work they don’t believe in or understand at all. What’s the point if no one’s engaging with your work in a meaningful way? Anyone can make scenery for people to drink wine and do coke behind. Nocturnal Animals is a testament to the power of art and its role as a spiritual cleanser. The book in question is a piece of weaponized art meant to hurt and involve someone who betrayed the author. We move in and out of this work, from one reality to another, always influenced by perspectives and experiences of one woman: Susan, played by Amy Adams, a red-dead insomniac who married the wrong man and falls in love all over again with the truly creative person she spurned 20 years ago. Anything that dwells on the practical and visceral functions of art gets high marks from me, and even if it’s a bit on the nose at times (the “REVENGE” painting?), Nocturnal Animals was the most exciting thing I saw in a theater this year.

2. Certain Women: Kelly Reichardt’s patience pays off. I was bored out of my mind by 2011’s Meek’s Cutoff, but in a contemporary setting, Reichardt’s obsession with silence and space creates something special. A triptych, just like Moonlight (which I saw the very next day and found maudlin and melodramatic in comparison), Certain Women follows three women thwarted by men and circumstance. The most compelling piece is the final one, where Jamie (a butch rancher played by Lily Gladstone) soars high into a silent crush high over her night school teacher Beth Travis (played by Kristen Stewart, close cropped hair and deer sweaters, the stuff of dreams for every Montana hipster). It is unreciprocated and unfulfilled, and we never see her verbalize a word of her love, but the passion is clear, as with all the crushing disappointment of their final meeting in the parking lot, where Jamie drove overnight just for shrugs and a thoroughly creeped-out stare. It offers a level of nuance rarely on display in American movies past or present.

3. Sausage Party: The first of its kind: a Pixar-esque computer animated movie that has this line in the first 10 minutes: “Hey Barry, I’m not quite sure how to say this, but your girlfriend’s a cunt,” said one hot dog to another. Team America didn’t come close, loaded with pre-election jitters and apocalyptic Bush-era cretins like Hans Blix. Sausage Party is just the sickness and the silliness of a stoned afternoon with your best friend, hurling offensive and horridly unfunny jokes and scenarios at each other in reciprocal hysteria. A miracle that Seth Rogen and co. have enough purchase in Hollywood to get this insane movie made.

4. Eye in the Sky: Easily the best 21st-century war movie yet. If a terrorist is inside a house preparing his suicide vest to blow up a mall, do you drone bomb him, despite the fact that an innocent little girl picked the wrong time to start selling bread outside? Easy math to me, but we all know this is a unique debate where opinion doesn’t fall strictly along party lines. Watch it with your friends and see which character they align with: bombs away Helen Mirren, measured and pragmatic Alan Rickman, or emotionally devastated Aaron Paul (who actually has to push the button). Of course there are the shrill doves that lecture anyone too eager to blow up a house full of radicals and a poor little girl out front. A fascinating morality play that feels adapted from the stage but made better—you could never do this in one room, because all the people deciding whether to drop this one bomb are spread out all over the world.

5. Rules Don’t Apply: The nicest, simplest of the three Old Hollywood movies released this year. Hail, Caesar! was undercooked, and Woody Allen’s Café Society was an ugly bore. Warren Beatty’s Rules Don’t Apply was inexplicably shafted by writers and audiences, and just a month after its release, it’s already left every theater around here. Maybe I was just over-caffeinated, but this was another simple movie about simple people that maybe we feel like we’ve all seen before, but somehow everything is just bittersweet enough to feel like one of the old studio romances that it’s imitating.

6. Zootopia: An animated kids’ movie that’s explicitly about racism, sexism, discrimination, and intersectionality that never hectors or comes off as corny. The only movie—maybe the only piece of media—released this year that dealt with identity politics in a way that didn’t make me wretch. The antithesis of MTV’s “Dear White Guys” video. Fun, clever, and very smart. By the way, don’t feel bad if you wanted to fuck the rabbit, too (Rooster Quibbits wrote that).

7. Manchester by the Sea: Casey Affleck’s character starts exactly where he began: broken, disengaged, getting into random bar fights. A heart that’s full up like a landfill. I’m happy to see this movie getting so much praise and momentum, because its emotional arc—total stasis—is rarely used or considered. It didn’t hit me until an hour or so after I got home that Affleck never went anywhere, and went on punishing himself like a Jain for something unforgivable and immense that he did that, perversely, no one can fault him for entirely, and he’s the harvester of sorrow that walks the earth only to feel the pain he has inflicted.

8. La La Land: The ending got me. That montage that plays when Emma Stone’s character sits down to watch her ex-boyfriend play a song in his own club, all those tropes of magical realism—the animated silhouettes, the model plane crossing an obviously manipulated globe, watching their perfect life play out in home movies and highlight reels of children born, expensive houses bought, dreams realized—and then to come out of that knowing it will never be. Those final five minutes make the rest of the movie’s hokey goings-on evaporate.

10. The Light Between Oceans: An honest, quiet movie. Like Certain Women, the power is in what’s left unsaid and expressed only through body language and facial expression. Impossible choices made by small people before an infinite expanse of water and weathered stone. Circumstance killed the cat. Written off as a dud and a diluted take on The Notebook, I was really moved by this film, but know I was just in the perfect mood for its simple story and earnest exploration of a time and place that isn’t relevant or sexy or exciting. I just dug it.