When watching a throwaway baseball movie is preferable to the Sox, something’s gone wrong. 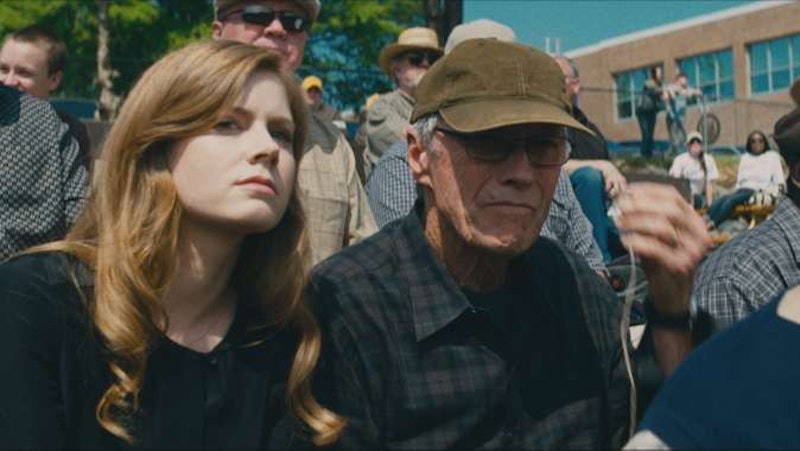 Last Sunday afternoon a decision was upon me: shall I park in front of the flat screen and watch the Red Sox/Orioles game or get dressed in cords and a sweater and head off to the local Landmark Theater with my wife and son and see Clint Eastwood’s sappy baseball film Trouble With the Curve? Not all such conundrums are so cut & dried, and after just a minute of hesitation, we drove off and settled into the Cineplex and went through the paces of 82-year-old Eastwood’s ode to baseball in the old days, before the sabermetrics crowd (of which my son is an avid participant) took over the sport.

The Bosox, as any fan knows, have disgraced themselves during the 2012 season, not only compiling a losing record that recalls the hapless teams of the early 60s, but also employing a manager, Bobby Valentine, who’s more suited to Crackerbox Palace than a dugout, and an ownership group that insults its fans with its phantom “sellout streak” and any number of pre-game festivities that recall an era when the team was always in the playoff hunt in September and you’d get nervous before and during each telecast. Mind you, this era ended just three years ago, but in an over-under-sideways down chain of events, it might as well have been three decades ago.

The film: Eastwood plays a near-blind baseball Atlanta Braves scout, Gus Lobel, who’s well past retirement age, and goes on road trips to inspect possible draft picks for his employer. His daughter Mickey (named after the Yankee great, but of course), played by the unstoppable Amy Adams, tags along, against her father’s wishes—it’s implausible that Mickey, a 33-year-old legal comet in Atlanta, would be the daughter of a very old man who’s minutes away from pleading his case to St. Peter, but no matter—and acts as his eyes and ears sitting in the bleachers at high school games in North Carolina, in between hustling yahoos at pool and flirting with a young scout (Justin Timberlake) in a romance that’s on the road to nowhere.

Gus is at odds with the Atlanta scouting team, led by a caricature of a Billy Beane/Bill James fellow who relies only on statistics to judge players and never sets foot on a high school or college baseball diamond. The star in question is a fat kid named Bo Gentry, laughably mislabeled as a five-tool sensation, who can hit the ball a mile. He’s the obnoxious half of a duo, pitted against the immigrant Carlos Sanchez who, until Mickey discovers his Justin Verlander-like pitching arm at the film’s conclusion, sells peanuts at the games. Bo, chased by scouts and ready to cash in on a huge deal, brags and signs autographs and regales his subservient teammates with tales of “banging chicks.” Against Gus’ advice, the Braves select young Bo, who is later humiliated when he can’t make contact with Sanchez’s fastball, or, obviously, his curve.

As noted above, Trouble With the Curve is sort of a silly film, but I liked it a lot, unsurprisingly since I also re-watch The Natural and Pride of the Yankees now and again, as well as excellent baseball movies like last year’s Moneyball and the best of them all, John Sayles’ Eight Men Out. My son Booker, who’s schooled me the last several years in tools like fWAR and UZR, hated not only the film but the very concept of it, ranting about its countless factual errors and rank sentimentality. But I’m used to this, since when we’re talking baseball or watching games, his eyes glaze over when I tell yarns of the games and superstars I’ve seen since ’62; he’s 18, and to his mind, baseball didn’t really exist before Billy Beane.

Back in the real world, I’ve become a pink-hat Orioles fan (I do live in the city, go to Camden Yards a lot, and the unlikely World Series match-up of the Birds and D.C.’s Nats is a splendid dream; obviously, anyone but the Yankees) and watch them in these waning days of the season, despite the club’s horrific MASN broadcasting team of Gary Thorne, Jim Hunter and Mike Bordick. (It puzzles me that Hall of Famer Jim Palmer, a MASN mainstay for years—during the losing years—is virtually absent from the booth, and I hope he’s healthy or, alternatively, hasn’t run afoul of O’s owner/tyrant Peter Angelos.)

Eric Wilbur, a pleasingly acerbic Boston Globe sports blogger, wrote a scathing piece about the Sox ownership group on Sept. 27, and while I do believe the Red Sox will compete in 2013, if once-neutered GM Ben Cherington is allowed to do his job, it’s hard to argue with the statement below:

This may be news to the impervious Yawkey Way compound, but people have grown to loathe the Red Sox, not necessarily because of the on-field play, but because of a leadership that is lacking, clueless, and obstinate about the direction in which this franchise is headed. Bricks, plaques, and the sellout streak have become mocking clichés, yet the Red Sox continue to preach their authority with a denigrating voice that speaks to either their lack of respect for their client base or their denial of reality. Maybe it’s both… The Red Sox don’t return to Fenway until April, presumably re-tooled and with [current Blue Jays manager] John Farrell in tow. Maybe they will be better. Maybe. The franchise on the whole though? It has no hope. It really doesn’t. It is stuck in its own vortex of obliviousness and all-knowing duplicity. Fenway Park sold out last night [Sept. 26]. It won’t be the last time. Wake me when it’s not a lie.

As someone with a passable understanding of revenue streams, I continue to believe that owner John Henry will rescue the sinking Red Sox dinghy, and let his “baseball guys” make the trades and off-season signings that will make watching Boston baseball once again a nerve-wracking pleasure. Unless Henry is willing to sell the team (he denies rumors, even though the sale of the Dodgers for an eye-popping $2.1 billion raised the value of every franchise by hundreds of millions of dollars), as an accomplished hedge fund manager, he really has no other choice. I hope.