The Timeless Genius of The Simpsons

The most important TV show ever, as well as the last Great American Novel. 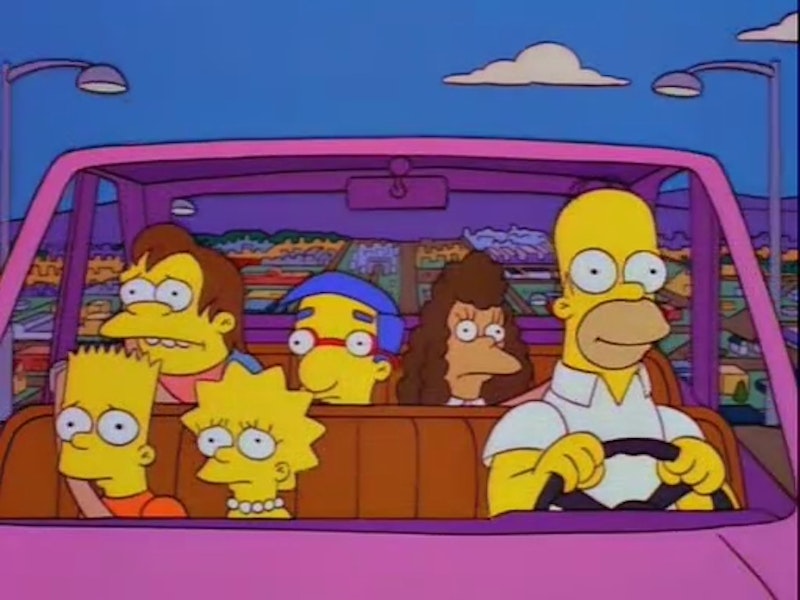 If you don’t like The Simpsons our friendship can only go so far. It’s strange how I can’t remember the first time I saw the show or in what context, but there’s an image lodged in my head of walking into the living room of our second apartment in Lower Manhattan, and seeing my mom sitting cross-legged in front of the TV while the intro in the clouds played, and the title card zoomed past. I think I asked what it was, but I don’t remember what she said, or what episode, or anything else. Also, this would place it past March 1999—unless my mind’s playing tricks on me, I clearly recall watching “Summer of 4 Ft. 2” around ’97 or ’98. But it’s probably just a weird superimposition of place and time. I remember asking my Uncle Doug why almost everyone in Springfield had yellow skin, and he told me that it was because of an accident at the nuclear power plant. I begged for more details like which episode showed the accident, but he hemmed and hawed and I soon discovered this wasn’t true—years later I heard an interview with Matt Groening where he got the same question, and he replied that it was an attempt to catch the eyes of channel-flippers and get them watching.

Without cable, I’m missing out on the FXX marathon of every Simpsons ever, and by now, two days in, it’s either smack in the golden age or nearing the end of the 90s, not sure if they’re actually running them all back-to-back 24/7 or airing them in increments over 12 days, I mean, it is 552 episodes, only 250 of which are real quality (that’s generous—most deep geek fans that followed it as it originally aired cite 1997’s “The Principal and the Pauper” as the turning point when the writers ran out of ideas and started tracking mud and wallowing in the pointlessness of this show continuing).

I stopped watching new episodes on a Sunday in 2003. There was an episode guest-starring blink-182, Weird Al Yankovic, and Tony Hawk that spring—I was obsessed with all three at the time—that just completely sucked. I was so disappointed, and finally understood what my friends Jeff and Alex that worked at the comic book store near our apartment were talking about. There was no story, and the guest spots were so slight and perfunctory and short. At the same time, my love for The Simpsons didn’t get any weaker. No amount of bad episodes can ruin what an amazing decade-plus run they had, and I watched six o’clock re-runs on Fox 5 and then Fox 45 for several years after.

Not too bummed about missing the marathon anyway, especially since FXX is broadcasting in the wrong aspect ratio, ruining sight gags and compromising every frame. I have three box sets lying around that I can watch anytime (purple, blue, and red—seasons three through four. Oh, and the Homer and Marge head-shaped ones—one of those has “Homerpalooza” on it, always in my top five). But it’s nice seeing people talk about prime rib The Simpsons, sharing lines, jokes, and screen caps of great moments I forgot, like Lurlene Lumpkin’s re-emergence in “Marge vs. the Monorail,” where she’s become a chain-smoking wash-up (“Last night I slept in a ditch”) with a new voice that’s a dead-ringer for Lunchlady Doris. Another joke that’s cracked me up the past few days, from the boy-band episode, “New Kids on the Blecch”: Lisa asks Homer what the chorus “YVAN EHT NIOJ” means, he responds, “Oh, it’s just one of those song titles that sounds good but doesn’t mean anything, like ‘Rama-Lama-Ding-Dong,’ or ‘Give Peace a Chance.’”

I was magnetically attracted to The Simpsons since the first time I saw it. I loved South Park and Family Guy too, but they weren’t ever high art, which The Simpsons absolutely is. South Park often suffers because of its super-condensed turnaround, from script to air in a week or less. The endings just fall apart, and its focus on topicality over story makes a lot of those episodes dated. It can be smart, but it can also be just as blithe, condescending, dumb, and cruel as Family Guy, which is just totally heartless. Those first three seasons are still pretty funny, but Seth McFarlane’s smug Massachusetts meanness is off-putting and gross, especially when it’s parroted and paraded around by shitty bigoted kids and friends you wished were smarter than to defend any use of the word “faggot” as a pejorative.

The Simpsons is panoramic and feels comprehensive of life, with strong, healthy cynicism and mistrust and disrespect of authority at all levels, cultural references that go back decades, even centuries, instead of last week, good writing, and yes, genuinely heart-warming and emotionally fraught writing. What a roller coaster: I mean, when Homer eats the blowfish, and he thinks he has 24 hours to live? Really heavy to watch as a kid, and helpful, because that’s a real situation, that’s life, and you need to confront those things as early as possible. The Simpsons is as important to our culture as Mark Twain or Tennessee Williams or Fitzgerald or Ralph Ellison. Not only is it the greatest sitcom of all time, it’s the last Great American Novel. There will never be another show as massive, widely watched, and singular as The Simpsons. So, if you don’t dig it, I don’t know what to say.