Guardians Is a Blockbuster That Works

Although everything it offers has been around the Hollywood track a few times. 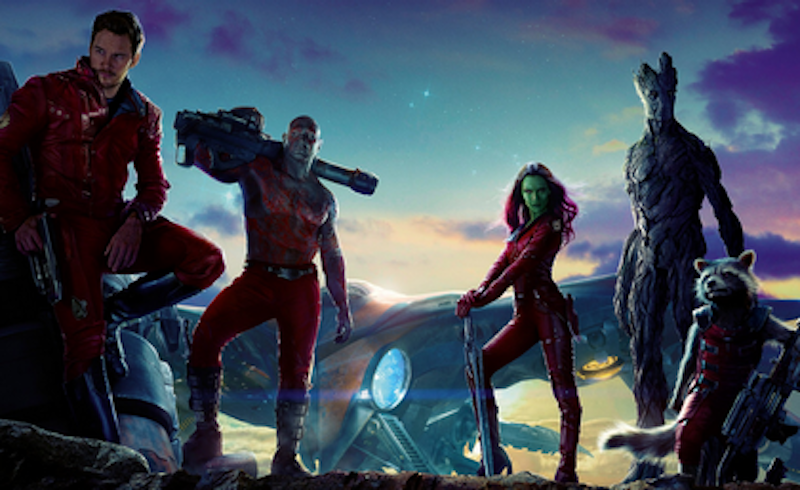 Everyone knows Guardians of the Galaxy is fun. It shouldn't be: everything it offers has been around the Hollywood track a few times. The movie leans on the cynicism, but so did Casablanca. The characters come out of Marvel Comics, but they're all types that have popped up in plenty of films. There's a Han Solo type, and with him there's an inarticulate hulking beast and a Danny DeVito knockoff and a man driven to vengeance and a chick with long legs who's skilled and deadly but tends to be a nag. The characters dodge explosions and have showdowns that involve big weapons. A blurb could use phrases stuck on 50 other big-budget summer blockbusters from across the decades: irreverent script, nonstop action thrill ride, dazzling visual feast, unexpectedly touching denouement. Except this time the phrases belong there. The movie is thrilling, it’s touching, it’s irreverent and it's wonderful.

If Guardians had turned to shit, it would have been a Star Wars prequel as directed by Zack Snyder. But somebody made good choices. Instead of giving us the fakeness that numbs and the soundtrack that punishes—what we usually get from big-ticket fantasy moviemaking—Guardians glories in its CGI and technical muscle without abusing them. Knowhere, the offworld mining site that is the phantasmagoric setting for the movie's centerpiece, cluster bombs the audience's senses, but smart people have been busy making sure the overload adds up to something. Even though diamond lights and odd-angled metal things fly around us at neck-killing speeds, we come away with a series of lightning-like, vivid glimpses of an alien space, not a muddle of detail.

The movie's production design is dead-on, and its color scheme (bruised-looking purples, wet-clay reds and greens) is muddy but glowing, dank but rich, perfect for the grotesque but beautiful zone of chaos that the movie creates as its characters scramble from the interior of a beat-up space cruiser to a terrifying space prison to a radiant but highly crowded collision of light effects in outer space. How all this got organized is a mystery. The movie cost $170 million, and the director, James Gunn, had made nothing but some webisodes and TV pilots and the 2010 indie film Super, a movie with a $2.5 million budget.

It does seem clear that Gunn rewrote the Guardians script to put in laughs and make the characters bigger wiseasses. This was crucial, of course. He also thought up the movie's heartbeat, the gimmick that allows the hero, and therefore the audience, to feel. A good heartbeat is rare. Guardians has the now famous Awesome Mix Vol. 1, a homely cassette tape of listened-to-death AM hits that space adventurer Peter Quill (a puppyish and very effective Chris Pratt) clings to because his dying mother gave it to him when he was a boy.

Like everyone else in the movie, Quill is chasing something called an Infinity Stone, a cosmic tchotchke that has a MacGuffin's usual overwhelming worldly importance (in this case, immense destructive power and a tendency to fetch astronomic money prices). But the Awesome Mix cassette also makes him scramble; for him it's just as important. The thing might be called a Rosebud, except it isn't sprung at the movie's end to explain mysteries. We know about it all along, and we listen to it shoot jolts of raw sentiment into the soundtrack by means of “Hooked on a Feeling” and “I'm Not in Love” and other 40-year-old pop beauties that make weak people feel ashamed for loving things so silly and pumped full of emotion. The songs and the cassette are small common things that are human and therefore can stand along with the CGI bursts and towering set design and not get lost. It's smart to have them here, and it shows a sort of respect for what it is to be a person, just some chump, and not something as elaborate as a movie star or a digitally created alien.

This intelligence and respect may be what make Guardians of the Galaxy a blockbuster that works. The lovable losers, the cynics who learn to care, the ragtag team that battles through a skull-battering swarm of CGI to keep a mysterious whatzit from destroying some planet or other—they're taking part in a mess that's so much fun to watch you're grateful it's there. There's nothing new about Guardians except that it's the movie that delivers. The Godfather, to mention a very different sort of movie, fell into this class too. The audience knows the type. There are movies that keep the promise of moviegoing from being bullshit, and we hang on to them.

Cast. The big-name character actors—John C. Reilly, Glenn Close, Benicio Del Toro—do fine by their parts, which are brief. As noted, Chris Pratt shines as Quill, the Han Solo character. Zoe Saldana passes as Gamora, the assassin who nags now and then, and Bradley Cooper is uninventive as the voice of Rocket, the talking raccoon who is the team's Danny DeVito. Vin Diesel voices Groot, the hulking tree-man; this requires him to say the same line (“I am Groot”) with inflections fitting a variety of different meanings, which he does.

One surprise is Dave Bautista, the pro wrestler who plays Drax, the man driven to vengeance. Bautista is a pile of articulated muscle, muscle that seems to get thicker as his physique mounts from waist to chest to throat. But he's delicate and dead-on when he handles the bits thrown him by the script.