Say this for The Prince of Tides: it shows that Hollywood has completely assimilated psychiatry into its hackiest understanding of the world. 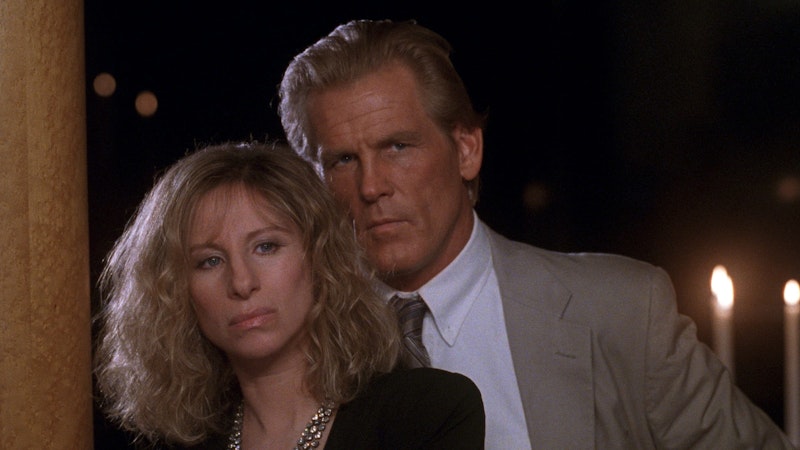 The Criterion Channel’s “Frame of Mind” collection brought together 17 films about psychiatrists and psychiatry, and if you look at them chronologically you can see American cinema figuring out how to make psychiatry into story. Noir potboilers like 1939's Blind Alley had psychiatrists take a man’s mind apart with surgical precision, while later films like The Cobweb (1955) were critical of the field and moved closer to something like real life. A range of even more realistic films from David and Lisa through Ordinary People developed sympathetic psychiatrists: humanists, who asked the right questions at the right time, and supported their patients along the way to life-changing epiphanies.

The last film of the collection takes that image of a humanistic, sympathetic therapist and tries to incorporate it into a realistic mainstream drama. And fails, hampered by romantic clichés. Say this for Barbra Streisand’s 1991 opus The Prince of Tides: it shows that Hollywood has completely assimilated psychiatry into its hackiest understanding of the world. Therapy’s developed its own set of lazy cinematic clichés, and enables many more. (The film, incidentally, was not found on the Criterion Channel’s page dedicated to the “Frame of Mind” selection, but was named as part of that selection in press articles before the selection went live.)

The screenplay of Prince of Tides was adapted by Pat Conroy and Becky Johnston from Conroy’s novel, and the film gave mainstream viewers enough of what they wanted that it got seven Oscar nominations, including one for Best Picture (though notoriously Streisand was not nominated for Best Director). The story follows Tom Wingo (Nick Nolte), a schoolteacher in South Carolina whose sister in New York tries to commit suicide. Tom’s mother asks him to travel north to help his sister; he does, and meets her therapist, Susan Lowenstein (Streisand). Susan works with Tom, secrets of Tom’s youth bubble to the surface, and by the end of the film not only is his sister cured but he’s more whole.

Mainly, though, this is a movie about Tom and Susan. Both married to other people, they fall in love with each other despite Susan’s role as therapist. It’s a relationship that doesn’t really work, either as realism or as melodrama.

Start with realism: the movie doesn’t grapple at all with what it means for a therapist to sleep with a patient. Technically Susan’s treating Tom’s sister Savannah (Melinda Dillon), but her work with Tom to delve into their shared childhood means she’s functioning as therapist to him as well. There’s no sense in the movie that what Susan’s doing is wrong, no way I can find to read the movie as aware of the issues the relationship raises; nor any awareness that Susan’s vindictive husband could use the relationship to ruin her professional standing.

This isn’t only a problem in itself, but one that leads you to notice that the movie doesn’t pay much attention to realism in other things, either. A part of the plot hinges on the meaning of a mysterious word which, even in pre-Internet days, could’ve been at least partially uncovered by diligent research at a good library. Tom’s sister creates picture books for children, but has a nice Manhattan apartment and an expensive therapist; it’s not clear where her money comes from, or how Tom affords an extended sojourn in New York.

Let’s say the movie’s a melodrama, a romance. That makes some sense; Susan’s husband is a one-dimensional meanie, allowing Tom to play Southern gentleman for Susan. But Tom’s wife Sally (Blythe Danner) is more complicated, and at the end of the movie Tom duly returns to her. This has the effect of retrospectively casting his affair with Susan as an idyll, a heightened affair that gains in power due to its brevity: a relationship with the feverish gloss of genre.

Except it’s not entirely convincing that Tom returns to his wife. There are scenes that try to bring out that relationship, but the writing’s not strong enough and the focus of the film is elsewhere, more interested in Tom and Susan. It wastes a great performance by Nolte. His Tom Wingo’s both uncertain and vigorous; loud and funny, and also self-conscious. Nolte almost sells the arc of the film, but in the end the character’s too simple to really come to life. And the other performances are hit-and-miss; Danner as Sally Wingo is fine, hinting at complexities not obvious in the script, and George Carlin has a nice supporting turn as a wacky gay next-door neighbor. But Streisand doesn’t bring the depth to her acting that Nolte does, and the movie feels unbalanced.

It doesn’t help that the dialogue’s relentlessly uninspired. We get an unironic “I’m too old for this shit.” We get a sententious voice-over with lines like “I don’t know when my parents began their war against each other. But I do know the only prisoners they took were their children.” And we get what can only be read as unintentional self-parody, when Tom’s mother asks, “Who taught you to be so cruel?” for him to reply “You did, mama. You did.”

The film’s craft is strong enough. The cinematography’s fine, if somewhat gauzy. The soundtrack’s solid. The costumes and sets do their jobs well enough without being eye-catching. But there’s nothing that makes the film anything other than a treacly Hollywood melodrama. Criterion putting it alongside other films about psychiatry makes you notice that this is perhaps the final mainstreaming of therapy: Psychiatry not as a profession with codes of conduct and consequences for action, but merely a narrative convention, a way to bring characters together for a doomed love affair. There aren’t any ideas about psychology here. But then there aren’t really any ideas at all.