Rat on the Run

The looming despair of Berlin in Fritz Lang's classic M (1931). 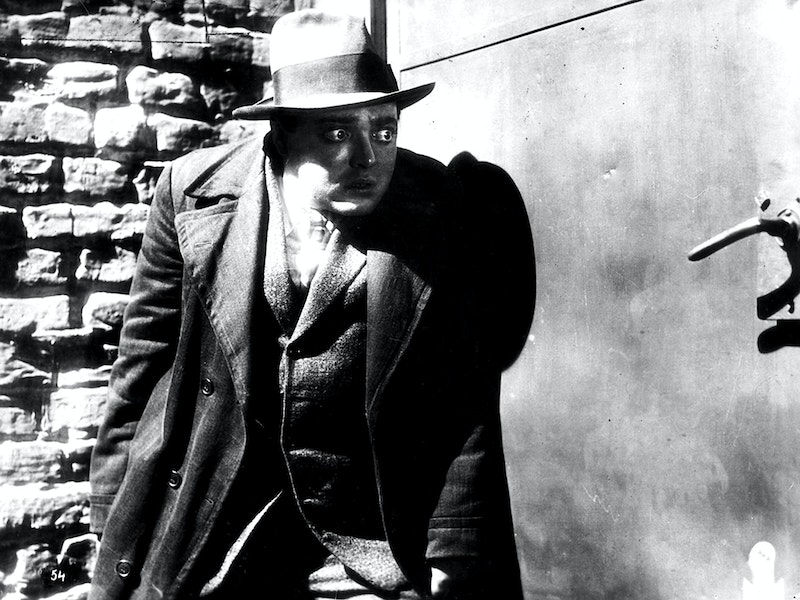 The streets of Berlin are covered in darkness. It doesn’t matter if it’s day or night; the city never sleeps for fear of murder. The murderer is among everyone and he has only one desire: to take away children from their parents. It all begins with a whistling tune that effortlessly comes out of the murderer’s mouth. It signals the beginning of the end for one child, a little girl he chose for the next victim. And so it goes, one after another.

Fritz Lang’s film, M (1931) caused, and still does, feelings of gruesomeness, fear, and pervasive darkness. Everyone will readily agree that a film about a child murderer isn’t a subject matter that elicits interest (certainly if one’s a parent). With M, Lang has created a blueprint for almost every thriller that we’ve seen from that point. It’s not merely the constant and hovering anxiety that the film hinges on, but also a sense of excitement at the possibility of justice.

M isn’t a straightforward mystery. Right from the beginning, we know that Hans Beckert (Peter Lorre) is the serial killer, and that he’s on the prowl for the next victim. Rather, this is a film about intricate relationships: anarchy and order; crime underworld and the police; law of the people and law of the city’s courts; and finally, the relationship of Beckert to his own mind.

Berlin’s thrown into a complete upheaval. The police are having difficulties catching Beckert. In fact, they don’t even know his identity. They go after small-time crooks and beggars, as well as the crime bosses of the underworld. But this naive outlook is what makes the police force weak and predictable. The criminals are annoyed that this serial killer is interrupting their “business.” Reluctantly, the police and the criminals join forces to catch the child murderer. After all, there are hierarchies of criminal activity, and the beggars and common criminals should be left alone to pickpocket, bribe, and engage in other illegal activities.

Nobody knows who Hans Beckert is, and how could they? He’s unassuming, kind, short, almost invisible. He’s a nobody who gets ignored on a daily basis by the passersby. He evades relationships with other adults, and becomes a child himself when he chooses his next victim. He’s slightly effeminate and in some way, genderless. Little girls react positively to this man, who could be a family friend. He tempts them with balloons, sweets, and fruit, and always succeeds.

The entire city population is enveloped in darkness. Insomnia runs the city, yet no one is truly awake. The great irony of the film is that the murderer is finally identified not by the police, criminals, or the city inhabitants, but by a blind man who sells balloons. Beckert’s whistling tune unmasks his identity.

The city criminals capture Beckert and create kangaroo court, in which Beckert’s tried and convicted. The people are the law but the authority they exert is hardly civilized. The question that arises is whether Beckert deserves to be treated like a human being. The makeshift court even grants him a defense attorney, who concludes that Beckert is mentally insane and as such doesn’t bear any responsibility for his heinous crimes.

As the mob’s about to descend and execute Beckett, the police break through the door and arrest him. As the film ends, we witness a judge beginning the proceedings but this isn’t a final scene. Lang chooses the voices of mothers, who conclude that no court and no justice is enough to cure the sorrow, thus rendering both the kangaroo and lawful court null and void.

Lang uses techniques of suggestion, rather than giving us the explicit views of murder. We’re never privy to Beckert’s actual crimes. Children’s faces are always happy and innocent, free of fear. The camera’s almost always hovering over the children: they’re within the view but not within the reach.

This is especially seen in the opening sequence when children are playing in the courtyard, singing silly songs that quickly turn from innocent to gruesome. Beckert has already murdered and we’re introduced to his next victim, little Elsie. But we never really see the exact linearity of events. Instead, Lang gives us eerie suggestions: an empty courtyard, Elsie’s mother calling out her name, Elsie’s supper waiting on the table, untouched, and an empty staircase, through which Elsie’s footsteps will never be heard again.

M is an atmospheric film. It may deal with serious moral and psychological questions, which are relevant for most of the films in the Weimar period. Beckert goes beyond Dr. Caligari and Cesare: he’s evil personified, yet somehow he wants to absolve himself of guilt. He wants to disassociate himself not only from murders but from his very self. In the end, it’s Lang’s vision that creates an uncanny and psychological lens that goes beyond linearity and thrives on the ambiguity of fear, dread, and guilt. The feeling hovers above the cityscape and soulscape, just like Lang’s camera.