Our Daily Bread should be required viewing for anyone who eats. (Grade: A) 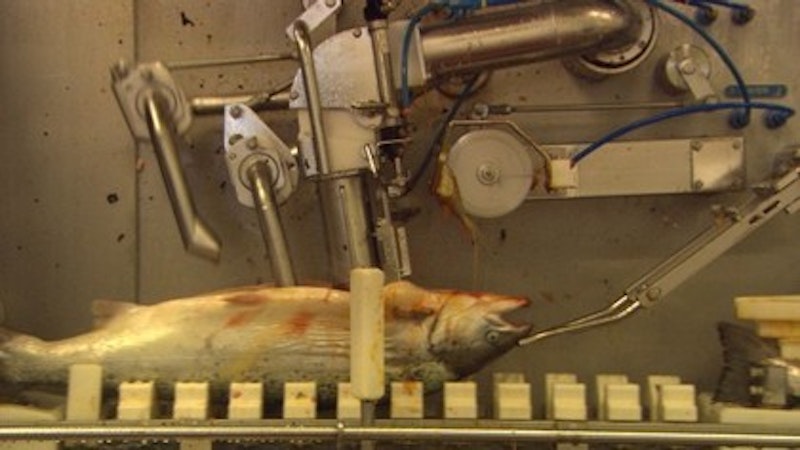 The American debate over food production is a noisy one, dominated at different times by Morgan Spurlock’s grandstanding Super-Size Me effort, the shock-and-awe approach of Fast Food Nation, or the more relatively dignified, yet still dense, work of Michael Pollan. In contrast, the 2005 Austrian documentary Our Daily Bread, which has only this month been released on DVD by Icarus Films, bypasses any recognizable argument and instead simply bears witness to the actual process of mass food manufacture. It’s an invaluable document, and should be the first word in any honest discussion of animal rights or contemporary consumption.

Our Daily Bread is composed entirely of stationary, dialogue-free shots of Austrian industrial settings, yet Director/cinematographer Nikolaus Geyrhalter and editor Wolfgang Wiederhofer manage to imbue their film with a sense of flowing drama and structure. The images aren’t randomly assembled; Geyrhalter and Wiederhofer take us through a half-dozen or so locations, from factories to fields, capturing a group of lettuce farmers with the same nonjudgmental tone as they photograph the routine slaughter of pigs, cows, fish, and chickens. The triumph of Our Daily Bread is that the filmmakers manage to exhibit dozens of emotionally loaded images without ever coercing viewers towards one conclusion or another. They may show the process by which a pig is rended apart, eviscerated, and de-hooved, but they never tell us how to feel about that process.

Indeed, while I can’t say Our Daily Bread made me excited to eat my next fish and chips, the sheer mechanical efficiency on display is often awe-inspiring. It’s easy to show people the splattered pools of blood on a factory floor and make a few of them go temporarily vegan, but it’s perhaps more startling and useful to show how mechanically exact the modern factory can be. Our Daily Bread captures the unceasing repetition of industrial processes just as skillfully as it documents the treatment of animals in commercial food production. A metal crop-waterer performs its function with the same unflinching routine as a machine near the film’s end that can only be described as a chicken-vacuum. Likewise, the human employees of these places go about their tasks with unnerving, calm detachment whether they are quality-controlling gala apples or applying the cattle stunner.

The visual precedents for Our Daily Bread are many: certain shots, particularly a very 2001: A Space Odyssey sequence in a salt mine, echo the quieter moments in Kubrick’s work; the constant mechanical hum and emotional distance likewise recall the industrial sequences in Godard’s Two or Three Things I Know About Her; and the entire film feels of a piece with Hiroshi Teshigahara’s 1984 documentary Antonio Gaudi, which also provided a wordless, visually stunning tour of technically breathtaking architecture. (There’s also a sly, unavoidable nod to Hitchcock in a scene with a crop duster.) But Geyrhalter’s film, by virtue of its plaintiveness and purely observant quality, really feels closer to nature photography than anything else. By drowning out the human voices in mechanical drones, and by following these factory employees as they leave their assembly tasks and have their own lunches, the director makes their participation in a capitalist process seem as natural as any Planet Earth sequence. And of course it is; Our Daily Bread refutes the screaming illogic of PETA and their ilk by giving humanity its due, and by acknowledging that however “inhumane” our treatment of edible animals may be, this is a process by which millions of people are both fed and employed.

It’s also a process that has grown to such size and ubiquity because of scientific advancement. In addition to the literally visceral moments of Our Daily Bread, the film contains dozens of strikingly beautiful images, many of them in surprising locations. A group of young men pick lettuce on their knees while a stunning, multicolored sunset drapes behind them, unmoving. A man, photographed in a long tracking shot, moves through a pen of chickens, his calm professionalism surrounded by cacophonous squawking. Two Austrian men have a friendly, laughing conversation as they’re lowered into the salt mine in a piercingly loud elevator. These shots show us realms as distant and cinematically foreign as any sci-fi movie, yet they are powerful precisely because of the calm human presence therein, and because these strange places are the very cornerstones of our daily lives.

The scenes involving animals are more gruesome, but often no less affecting. Rather than chiding meat-eaters for “murder,” Our Daily Bread reminds us that such behavior provides jobs for others. It also shows us implicitly how far removed we are from our own consumption and survival. As a film, it’s by turns harrowing and astounding, and often both at once. But most importantly, it repositions contemporary ideological divides over slow food, organic production, and animal rights by simply addressing what typical food production looks like. Geyrhalter and Wiederhofer have transcended ideology by photographing the world beautifully and unflinchingly.

Our Daily Bread. Directed by Nikolaus Geyrhalter. Not rated, 92 minutes. Available on DVD from Icarus Films.