With Being There, newly released in a 30th anniversary deluxe version, Hal Ashby ended a decade-long run that matched any American director’s in the 1970s. (Grade: A-) 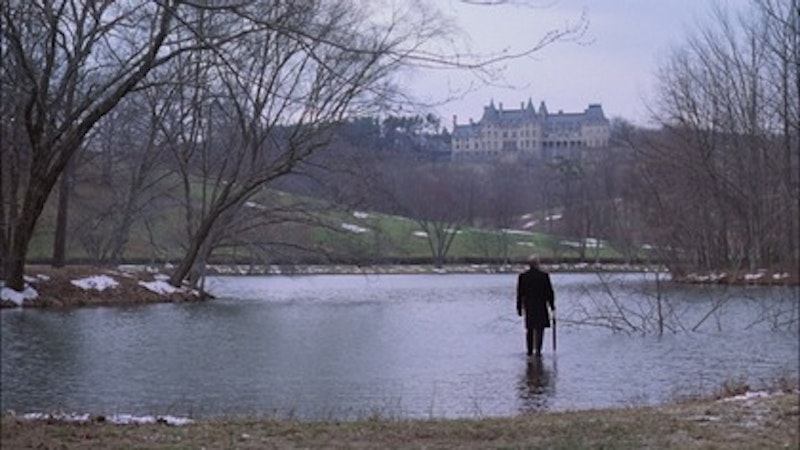 There are a number of reasons why the 1979 film Being There, out now in a beautifully restored edition from Warner Brothers, is primarily thought of as a showcase for Peter Sellers, rather than a further triumph for its director, Hal Ashby. First and foremost, he is the film’s unequivocal star, appearing in nearly every scene. He was also, as legend goes, the main driving force behind the film’s production, having contacted novelist Jerzy Kosinski to tell him he wanted to make a movie of the writer’s information-age fable, published in 1971. And the film was also a simultaneous creative resurgence for Sellers, who had spent most of the decade doing Pink Panther sequels, and his swan song; it was his penultimate role (and his last iconic one) before his 1980 death.

Sellers also owns Being There in the cultural consciousness because Ashby has been unfairly deprived the celebrity afforded to his better-known contemporaries. Somehow, despite producing the most thematically varied, socially aware, and technically inspired body of 70s work this side of Altman, Ashby was often seen as a director-for-hire, and his name doesn’t register in popular culture like the last-name-only gods of the era: Scorsese, Coppola, De Palma, Spielberg, Lucas, et al. It’s not for lack of popularity at the time; Ashby’s sex farce Shampoo was one of 1975’s biggest financial draws, as was multiple Oscar-nominee Coming Home for 1978. It’s not for lack of cult appeal; Bud Cort, the lead in Ashby’s Harold and Maude, was stalked by rabid fans for years after that film became required counterculture viewing. And it’s not for lack of influence, as Ashby’s praises have been sung by many directors since, notably Richard Linklater, Alexander Payne, and Wes Anderson. Ashby also worked with a veritable Hall of Fame of 1970s Hollywood, from actors like Jack Nicholson, Jane Fonda, Warren Beatty, Jon Voigt, and Julie Christie, Chinatown screenwriter Robert Towne, and era-defining cinematographers like Haskell Wexler, Lazlo Kovacs, and Gordon Willis.

From The Last Detail.

Two widely held notions about his work have led to the perennial under-appreciation of Ashby’s role in the fertile 1970s film scene. The first, and least questionable, is that the man’s career couldn’t have ended much more unceremoniously. After Being There, his long-standing addictions to marijuana and alcohol proved fatal. He made a handful of bland films in the 1980s—unfortunate flops like The Slugger’s Wife, in which Ashby also has a short cameo and looks nearly ghostlike—before dying in 1988 at age 59, when his critical and commercial reputations were at their lowest ebb. It’s worth noting, however, that this career arc differs from his New Hollywood contemporaries only in Ashby’s early death; imagine if Scorsese had passed away after The King of Comedy and After Hours but before Goodfellas, or if Altman had died after O.C. and Stiggs but before The Player, or Coppola after The Cotton Club but before his success with literary publishing and good-not-great mid-priced wines. And need we mention Howard the Duck?

The second commonly cited reason for Ashby’s relative anonymity is his perceived lack of directorial style. There’s nothing in the man’s films, this argument goes, as instantly recognizable as Altman’s slow zooms and hectic ensemble casts, or Scorsese’s acrobatic cinematography and ethnic masculinity, or even Peckinpah’s scorched-earth violence. We tend to look at that time period as one of bull-headed, visionary auteurs driving studio heads crazy, whereas Ashby’s movies have a softer touch, at times even more stoned and elliptical than Altman’s. As a result, his astounding debut film, The Landlord—a movie that should be revered as a cultural touchstone and landmark examination of race and urban gentrification—isn’t even available on DVD, and the first book-length look at Ashby’s life and work is only becoming available now.

Being There is perhaps the slightest of Ashby’s movies of the decade—the others were, in order, The Landlord [1970], Harold and Maude [1971], The Last Detail [1973], Shampoo [1975], Bound for Glory [1976], and Coming Home [1978]—and the most stylistically set-apart, but even so, it exhibits Ashby’s tell-tale idiosyncrasies. As such, it shows us how deep the man’s thematic concerns and aesthetic methods ran—that he was anything but style-less.

From Bound for Glory.

Like all of Ashby’s classic films, Being There concerns interactions between the fabulously wealthy and people with more approachable problems. Sellers plays Chance the Gardener, a borderline-autistic man-child who has never left the house of his rich benefactor. Raised almost entirely by television, Chance has to make his way into the outside world for the first time when “the old man” dies. He ambles throughout Washington, D.C., where his interactions with a young black gang echo the similar privilege-meets-poverty dynamic of The Landlord, where Beau Bridges’ entitled rich boy buys a tenement in Brooklyn. Chance eventually stumbles into the lives of Ben and Eve Rand (Shirley MacLaine and Melvyn Douglas), a dying businessman and his lonely wife who, like everyone throughout the film, including the president of the United States, mistake Chance’s detached air and vacant simple-mindedness for refreshing honesty and wisdom. (Asked at party if he can write a memoir, Chance replies, “I can’t read,” to which his interlocutor laughs and exclaims, “Who’s got the time?”) The protagonist’s increasingly complicated travels mirrors the picaresque road trip taken by three Naval officers in The Last Detail, and the attention to amorality among politicians and authority figures recalls the similar targets in Shampoo and Harold and Maude.

Being There, although more entertaining than Kosinski’s heavier-handed novella, still seems a little too impressed with its own metaphorical importance, but it is still a fine satire of people’s tendency to attach their own meanings to their surroundings. And even though the tone—Being There is as stately and quietly dry as a mainstream comedy can be—and the superficial look of the film differentiates it from Ashby’s 70s work, we can see his aesthetic personality peaking through. Director of Photography Caleb Deschanel gives Being There a slick veneer to match the settings’ polished wood and waxed floors, never using the grainy stock preferred by Wexler, Willis, and Kovacs, but he still, like those DPs, shoots a number of important scenes in far long shots. The devastating montage that ends Coming Home similarly includes a Vietnam veteran’s apparent suicide shot from faraway, just as Shampoo ends with a long take of a car disappearing into the Hollywood hills, and Bound For Glory, a biopic based on Woody Guthrie’s Dust Bowl memoir, contains innumerable wide shots of the man traveling microscopic and alone through the southwest desert.

All of these films have protagonists that struggle against outside forces, typically their own social class and attending expectations, so by miniaturizing them within the scenery, Ashby depicts their circumstances aesthetically. Which is perhaps why Being There, with its purposely featureless main character, feels less urgent and impassioned than Ashby’s emotionally edifying earlier work; Chance is funny and Sellers’ performance is an incredible display of on-screen restraint, but the character is a cipher, not a realistically struggling human like Nicholson’s midshipman Buddusky in The Last Detail or Copee Johnson, the seething black nationalist in The Landlord.

Nevertheless, all of Ashby’s cardinal artistic choices are apparent in Being There. Just as pop music and television frames the lives of characters in Harold and Maude, Shampoo, Bound for Glory and Coming Home, Chance’s journey is accompanied at every step by ever-present TV broadcasts (making the film an excellent clearing-house of period footage). And while Ashby’s films always revolve around a single protagonist, they frequently grow to encompass expansive ensemble casts; accordingly, each film eventually devolves into an extended, barely controlled party scene, whether in a poor black neighborhood (The Landlord), a bohemian loft (The Last Detail), an Okie resettlement camp in Depression-era California (Bound for Glory) or a gala for multi-millionaires, as in Being There.

When people say Ashby lacked a distinct style in the 70s, they usually mean he tackled a seemingly random patchwork of American subcultures: the military, the black urban underclass, insular Los Angelinos, Dust Bowl refugees, spiritually aimless monied families. But detractors miss the insightful, subversive eye that Ashby brought to these disparate settings, the way he could fill a tear-jerking melodrama like Coming Home with off-kilter imagery—one recurring character keeps popping up in the background with a ventriloquist’s dummy—resulting in his most striking, powerful film. The result is one of the most politically and socially relevant bodies of cinematic work produced in Hollywood at the time, and one that reflects the concurrent changes in both American society and the director’s attitudes. At the start of the decade, Ashby celebrated the counterculture and its ideologies in The Landlord and Harold and Maude, the refrain of Cat Stevens’ “If You Want to Sing Out, Sing Out” repeated in the latter like a rallying call. But by The Last Detail, Nicholson’s foul-mouthed reactionary is cut down to size, and his defiance is ultimately halted by the military system that owns him. In Shampoo, which was made in 1975 but which takes place on election night 1968, Ashby shows how the various musical, sexual and drug revolutions of the late 60s ossified into selfishness and greed, as personified by the televised likeness of Richard Nixon that haunts the interior scenes.

Having examined the disappointing fate of 60s radicalism, Ashby made two socially conscious dramas commemorating the origins (Bound for Glory) and earnest ideals (Coming Home) of the era. If Being There feels different than the six movies that preceded it, perhaps that’s because it looks forward, into the 80s, rather than backwards at the various failings and achievements of the Vietnam era (it is the only of Ashby’s 70s films to take place later than 1971). As such, it lacks the sense of communal passion that animates the director’s best work, but it successfully anticipates the rise of mass media and political engineering that would dominate the coming decade. Had he lived long enough, perhaps Hal Ashby could have retrospectively dissected 1980s with the same wit and teeming humor he brought to his examinations of the late 60s and 70s.