The Passion of Charlotte

Gaspar Noé’s “short” 51-minute film Lux Æterna, now out on Yellow Veil, is better than most of his features. 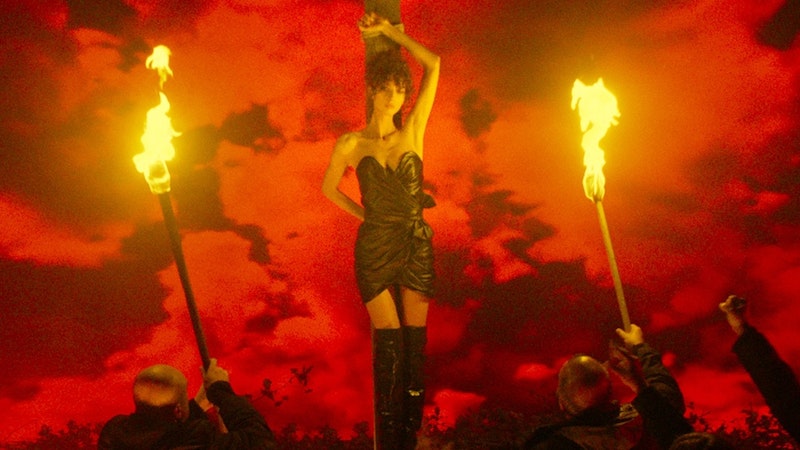 Gaspar Noé’s Lux Æterna premiered three years ago, but it was just released on home video. The “short” film (51 minutes) is a comparatively carefree counterpart to his recent feature Vortex, which used split screen to show an elderly couple (played by Dario Argento and Françoise Lebrun) in the last months of their lives. Vortex with a brief moment of serenity: Argento and Lebrun sit on the balcony of their Paris apartment, smiling. “Isn’t life a dream?” He says. The movie’s in 2:35:1 widescreen, but this introduction is in a boxy frame right in the middle, along with the credits. As soon as their mental and physical declines begin—her with dementia, him with his heart—Noé puts two boxy frames side by side and runs with it for more than two hours. While she’s in the bathroom flushing her pills down the toilet, he’s asleep and, for now, blissfully unaware of his wife’s new “disaster.” When he finally dies of a heart attack, we see him scream for help in vain while she’s completely out of it in another room.

Vortex is a brutal and bleak film, but true—still, if you want to convince someone split screen is more than a gimmick, it’s not the best catch-all example. Lux Æterna is, and while the relationship between the two frames isn’t as deliberate or inventive as Vortex, the film is all the more potent for its brevity and sense of freedom. It’s a very free film: it begins with a 12-minute excerpt of Charlotte Gainsbourg and Béatrice Dalle on a set talking about past productions and their horror stories. According to Noé’s brief introduction included on the Yellow Veil disc, this is them speaking honestly about their lives, absent only names of actors and directors (Gainsbourg has one Dalle can’t top: during a sex scene, she was with a much younger and inexperienced actor who accidentally ejaculated on her leg. “I felt so bad for him. I understood. I almost started apologizing.” They’re both laughing).

Dalle plays the director in this long-short or short-feature film, of what exactly is unclear: a commercial? A short? A fashion line? Yves Saint Laurent financed Lux Æterna and gave Noé little time but carte blanche. Everyone on this nightmare production looks great, despite every movie set cliche popping up: the guy who tries to pitch “a feature I’ve been developing” to the lead actress, manic assistant directors, zombie production assistants, panicking actors, technical problems, and an insane director. The first 12 minutes of the movie with Gainsbourg and Dalle speaking with each other as themselves is more compelling than just about everything that follows, until the end: affixed to a cross looking chic as hell beside two other actors, Gainsbourg burns at the stake against a chintzy video wall of Hell and in front of a lot of listless extras.

As Dalle loses her mind, the video cuts out and turns into a strobing red, blue, green, white, and black pattern that continues for the final 15 minutes of the movie, along with a beautiful ringing noise that sounds like a single Bermuda tree frog. Everyone else is plugging their ears and losing their minds, but Gainsbourg is ecstatic, in designer sunglasses and in the thrall of her own Passion. It’s an exhilarating film bearing the unmistakable energy of extreme pressure, limited time, and “pure instinct,” as Noé says himself in his introduction.

Included on the second disc of the Blu-ray release are four crucial experimental film essentials: Ray Gun Virus by Paul Sharits, Inauguration of the Pleasure Dome by Kenneth Anger, La Ricotta by Pier Paolo Pasolini, and The Flicker by Tony Conrad. It’s a necessary collection, and the Yves Saint Laurent-funded Noé movie is better than most of his features because he was working on panic and instinct. Going through Hell to make something great, for however long, is inevitable.