What happens when a Jess Franco film has a plot? 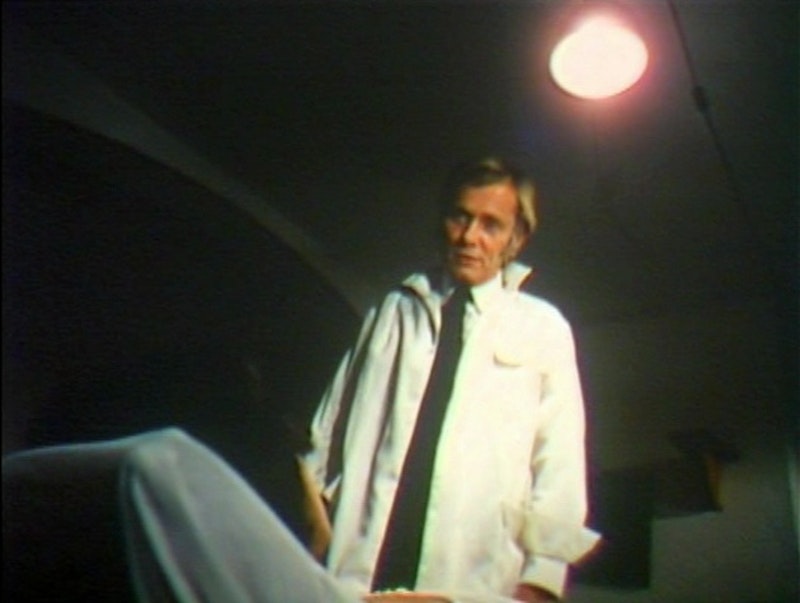 Cult schlock director Jess Franco's 1973 film, The Sinister Eyes of Dr. Orloff—recently released on DVD—seems like a fairly unusual Franco film. Mostly because it has a plot.

Of course, there are some typical Franco elements: murder, hot women in gratuitously short skirts, hot women falling out of their clothes, hot women murdering each other while falling out of their clothes, dream sequences, etc. Not to mention the obligatory surreal detour into utter incompetence. The best example of this here is a recurrent folk song sung in warbling tinny, out-of-sync lip-sync by the improbably ectomorphic and improbably named Davey Sweet Brown (Robert Woods.) Another highlight is disappearing subtitles, which (at least for non-Spanish speakers) add that dollop of incoherence that you’ve come to expect from any movie directed by Franco.

Still, plot. There’s just no getting around the fact that events here occur in something like a sequence and that characters have recognizable motivations, however preposterous they might be. The congenitally crippled Melissa Comfort (Montserrat Proust) has recurring nightmares involving her dead father and copious amounts of blood. Her greedy oversexed sister Martha (Loreta Tovar) and greedy over-sexed step-mother (Kali Hansa) bring in Dr. Orloff (William Berger) to treat her. Except, it turns out, Dr. Orloff was in love with Melissa’s mother and when said mother dumped him he swore revenge, which he achieved by hypnotizing the Melissa and getting her to kill her father when she was 10. Which she was able to do because her initial paralysis was actually caused by Orloff hypnotizing her mother and convincing her that her daughter would be paralyzed, so the daughter was paralyzed (“it’s like I was involved in your conception!” Orloff enthuses) but then Orloff hypnotized the daughter so she could walk and kill her father. Or something. And then he hypnotizes her with the help of the sister and the mother to kill her uncle so they can inherit lots of money and live in nice hotels and screw all the men they want, but then the mother kills her daughter and Orloff sends the hypnotized Melissa to kill the step-mom, which means that now he’ll get all the money, but the folk singer and a cop stop him. The end.

Which leads you to wonder, what caused Franco to suddenly turn himself into a bargain basement Hitchcock, with suspense and plot twists and dream sequences clearly marked off as dream sequences? Was he dropped on his head and suddenly set right? Or what?

Probably it’s just the script or his collaborators or the phase of the moon or something banal like that. But I like to think, more poetically, that what happened was Dr. Orloff. The Orloff character appears in a number of Franco films—though he’s played by a plethora of actors and from what I can tell there’s little actual connection between one baddy named Dr. Orloff and the next. In any case, this Dr. Orloff is all about the eyes; the film opens with a close-up of him staring intently, and when Melissa goes about her bloody business, we occasionally get flashes back to the same deadly ojos, looking commanding and fiendish.

Thus, Orloff functions essentially as a director within the film. His vision determines the action; he sees, and Melissa obediently staggers off, woodenly wreaking havoc in the way that Franco characters usually wreak wooden havoc—albeit, in this case, with somewhat more focus. Orloff’s directorial impulses are at times suggested even more explicitly. In one scene, he tells Melissa that her family thinks she’s crazy because, he says, he needs to “see her reaction,” as if he’s a filmmaker trying to calibrate his audience’s response. Shortly thereafter, he pats her on the should and tells her, “In that little head of yours the dreams and the reality are mixed together.”

This is of course true of Melissa, who dreams about the real murders, which on waking she forgets. But the film is both reality (there are real people up there) and dream, all mixed together. Melissa’s dream of murder is (unbeknownst to her) real, and that reality is (further unbeknownst to her) a fiction, or dream. When Melissa kills the loyal family butler on a foggy deserted road, the artificial mist and oversaturated lighting at times makes it hard to see what’s going on; the viewer is forced to become conscious of not seeing, and so of seeing. Similarly, Melissa’s slow stiffness, her awkward limping, and painful zombie overacting, reminds us of the naturalness of her unnaturalness. She looks like she’s in a film because she’s in a film, with Dr. Orloff (whose eyes appear in a quick jump cut) directing.

The horrified butler looks up at her not to demand she stop but to ask, “Miss Melissa, what are you doing?”—a question that actors in Franco’s films must have asked themselves and each other on more than one occasion. And after she’s done the deed, the camera zooms in for a fish-eye close-up on her before she clutches her head and falls to the ground. It’s a reminder that what’s in her is what’s watching her. The filmmaker moves around in someone else’s body until, eventually, he gets tired with the scene and discards his toy.

Imposing your own will on others is, of course, a sadistic pleasure; Orloff, with his giant needles, surely experiences it as such. Franco’s no stranger to sadism either; as just one example, his 1975 film Barbed Wire Dolls opens with the extended beating of a nude woman chained like a dog. Watching The Sinister Eyes of Dr. Orloff made me think, not only of the sadism in that scene, but of the sadism that must have been implicit off-camera for that scene to exist. What exactly was the conversation like in which Franco explained to the actress that she needed to strip down and put on a collar? And is that different in kind, or only in degree, from telling an actor or an actress what to say, where to stand, and how to feel?

Sinister Eyes also suggests, perhaps, that the rather desperate, over-the-top sadism in some of Franco’s movies might be linked to their fragmentation. Normally film directors are more like Orloff; they get their kicks not by elaborate beatings, but through more effective, and thus subtler means of control. The Sinister Eyes of Dr. Orloff is Franco imagining himself as a filmmaker who has a hold on his film and the actors in it. When the evil doctor leans over Melissa at the film’s end and tells her with lip-licking sibilance that he is going to inject her with a drug that will make her “lose her mind completely and forever,” it seems less like a threat than like a promise to Franco fans. The doctor’s execution seals the bargain; the director is dead. Next film, we’re back to insanity.