Beyond the Cosmos (and Back Again) 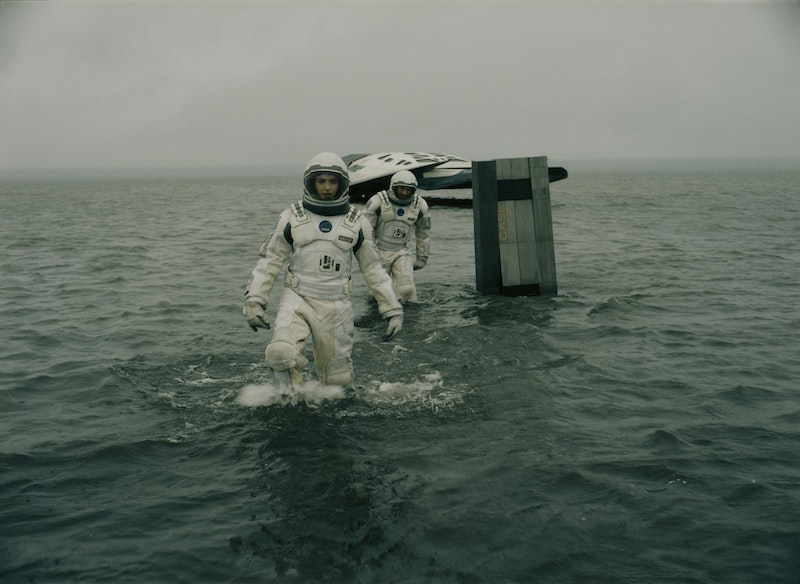 A fascination with a timepiece. A pickup truck. Farm fields in the heartland. Time-travel hoo-ha. A depressed future. Non-military drones. Interstellar shares this handful of markers with 2012’s Looper—and, I’m just realizing that way too many filmmakers get off on farm imagery—but the comparisons end there. The 2044 primary future of Looper was extreme economic inequality depression. In the primary future of Interstellar, the climate change chickens have come home to roost and crops are failing, one after another, with huge, deadly dust clouds sickening everyone; the date is never specified, but it seems reasonable to posit 2040-2050 as a timeframe as this movie opens. Everyone’s a farmer, or raised to be a farmer, because everyone’s starving; there are no armies; there is no hope; clouds of dust bury cars and coat dinner tables and bully fans away from baseball diamonds; there are school textbooks that insist that the 1969 moon landing was a Cold War-fueled hoax. There are no discussions about how humanity has fouled the earth beyond all measure, probably because it’s way, way too late to do anything about that.

The audience’s avatar is Cooper (Matthew McConaughey), a widowed astronaut-turned-farmer who lives with daughter Murphy, son Tom, and father-in-law (John Lithgow). Tom is on track to become a farmer; Murphy is a bit more rebellious. Strange doings are afoot at their farmhouse, which leads to an underground NASA installation, which results in Cooper leading a team of astronauts into interstellar space via a recently materialized black hole (Gargantua) near Saturn, ostensibly in search of a new home for humanity. Oh, and did I mention that Cooper’s mission is the second mission?

The first hour of Interstellar consists of scene-setting and exposition—which drives home the stakes nicely, the way I wish Avatar had bothered to—and then director Christopher Nolan slingshots us, and some of the cast, out into deep, deep space. There are awkwardly constructed robots, one of which is intimately familiar with Arthur C. Clarke classics. There are difficult and personal decisions to be made on the journey. There is a very literal long distance separation between Cooper and his children, who age faster than he does due to some scientific principles I don’t quite comprehend. Most of all—and here’s the kicker—there’s a lot that a reviewer can’t say without ruining this movie for anyone who might want to see it. What I can say is that Interstellar is visually striking, and should be viewed in a theater. Watching McConaughey, Anne Hathaway, and others tumble through sterile spaces in simulated zero gravity excites and unnerves. There is a water planet with mammoth, five-story high waves, and a frozen planet framed by ice clouds that resemble Iceland. Wild, boisterous pyrotechnics dazzle in through-the-wormhole sequences, and the orange, acorn-shape of Gargantua, viewed from a distance, will blaze in your mind for days. A fair amount of bulky module/ship/hull/launcher space porn is in evidence here—and some of it explodes, silently, in space, which is somehow more horrible than it blowing up within a planet’s atmosphere. There is a scene where McConaughey drifts through an impossible nimbus of light that is more than worth the price of admission. Those robots will never stop creeping you out, simply by continuing to exist. And if you have watched, say, Sunshine, Alien, or Ghost Ship, you know damned well that very little good comes of pursuing prior missions whose crews haven’t been heard from.

However you feel about the late reveals—which may send you scrambling to rent and re-watch The Abyss—one inevitably comes away from Interstellar supremely awed, bowed, and humbled by the sheer vastness of space and possibility. Could Nolan have handled the human elements better here? Sure, but it’s important to understand that while love is the key complicating plot factor in this movie, Interstellar is much more concerned with big ideas, and how tightly we’ve got to hold onto them if we’re to survive long enough to sweat the smaller stuff—something a lot of great science-fiction authors, throughout the years, have understood this very well.