The Nightmarish Greatness of Severance

The series is a descent into loss, through a labyrinth of routine, toward a limbo of ignorance and fear. 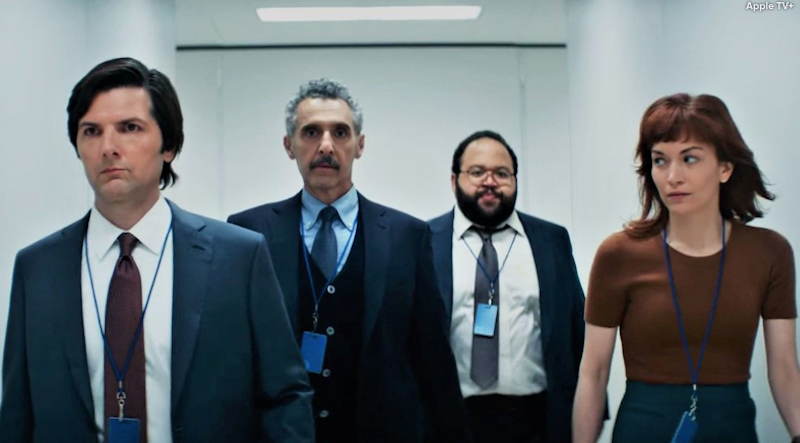 The series is a descent into loss, through a labyrinth of routine, toward a limbo of ignorance and fear. All knowledge of the outside world disappears during the descent, causing a change in perception as a scout, Mark Scout (Adam Scott), enters a maze and follows a long take of a journey into morning. Mark moves to the melody of “Labor of Love,” the sound of sedation, which takes him to the void of an office without a front door. So begins Mark’s day at Lumon Industries, where his fellow refiners—desk slaves who sort numbers—include Irving Bailiff (John Turturro), Dylan George (Zach Cherry) and Helly Riggs (Britt Lower).

What Mark and his colleagues do is a mystery, except to say they have the same fear—arithmophobia—without fearing the same numbers, because their fear is the product of severance: a brain implant that controls what each of them knows about their non-work selves.

That they know nothing but work, and nothing about the work they do, is the point of severance; for Severance is a procedural about a presumably irreversible procedure in which workers volunteer to commit suicide by science, so as to experience the luminescence of near-death without the transcendence of enlightenment, all the while revering and reciting the banalities of Kier Eagan, Lumon’s founder.

Thus do we see the continuity between Eagan’s likeness in stone, his face a bas-relief of Soviet-style enormity in the atrium of Lumon headquarters, and an enormous likeness of his body in the Perpetuity Wing of a Disney-style hall of animatronic claptrap. The similarities between the two, of a necrocracy above ground and a necropolis below, speak to the terror of technology with a dead man’s face.

All Severance is a struggle to sever (indeed) the merger of man and machine, disrupting the transfer of energy from the soul to the screen.

The metaphors are several and the allusions many, with tributes to The Shining and 2001: A Space Odyssey, in addition to the binary division—first by Warner Brothers, second by severance via scalpel—of The Matrix and the Wachowski Brothers (or Sisters).

To say more, minus calling attention to the house by Edward Hopper and the madhouse by Alfred Hitchcock, to say more about “House by the Railroad” and the house in Psycho, never mind the Psycho Barn on the roof of a museum and the replica of Eagan’s house at the bottom of a corporate mausoleum, would be insane.