Alex Garland’s Men is one of the worst movies of this young decade so far. 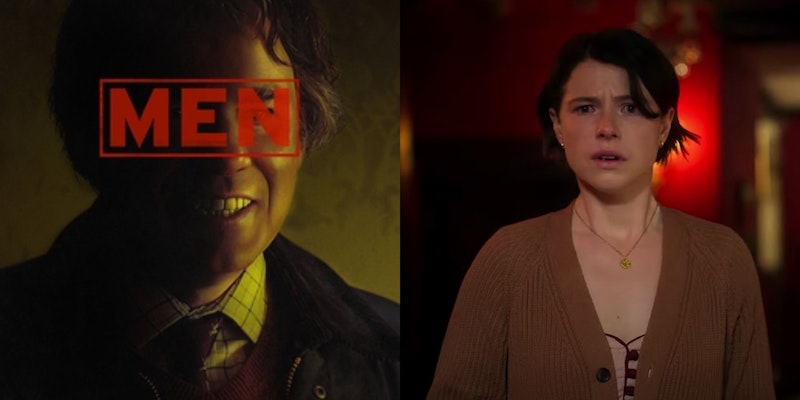 Walking out of Men, Alex Garland’s new movie, I said to my friend that it had to be one of the worst movies of the decade. She rolled her eyes and said, “…Well, the decade is young.” All of us hated the movie, but we agreed that it wasn’t as offensive or misguided as Emerald Fennell’s Promising Young Woman. None of us liked Everything Everywhere All At Once, and say what you will about the Daniels’ facile and annoying worldview, at least that movie had something going on—you know, you could tell people made it. I’m not so sure about Men; is Alex Garland getting a divorce? Is this his idea of one of the fake movies teased in Tropic Thunder or Grindhouse?

Because if so, great job—Men is the only piece of evidence A24 detractors need, a perfect unintentional parody of a “house style” I’m not sure exists in the New York movie studio, but it’s obviously entered the lexicon: symmetrical shots, scary animals, dark woods, ancient runes and rituals, rococo lighting, and slowwwwwww medium shots of people with their mouths hanging open. And every horror movie is about personal trauma and grief. I chafe whenever I hear people talk about “A24 movies” because as far as I know, they don’t have a mandated style guide or set of preoccupations that they foist upon their filmmakers. If there’s an aesthetic link between movies like Hereditary, Uncut Gems, Booksmart, Ex Machina, Zola, and Moonlight, it’s only so common as that of the films released by BBS Studios in the late-1960s and early-1970s, or the half dozen movies (including The Heartbreak Kid and Looking for Mr. Goodbar) currently owned by Bristol Myers Squibb.

Garland wrote and directed Ex Machina in 2015, a fine film, along with his 2018 follow-up Annihilation. Despite cranks braying about Garland ripping off Tarkovsky liberally—Stalker and Solaris especially—I thought it worked well on its own, even if it was a little puzzling when people started seeing it six, seven, 18 times. The guy wrote 28 Days Later and Sunshine, so it’s not like Garland is some untested neophyte choking or falling into the sophomore slump. Men is spectacularly bad when people are speaking, and unbearably boring when people aren’t. Jessie Buckley plays Harper, a woman who escapes to a quaint English cottage after being punched in the face by her husband and then watching him fall past their window as he jumps to his death from the roof. This incident is played out in bits throughout the film, and even though the punch is one of the last things we see between them, it’s obvious from the start what happened.

Paapa Essiedu plays James, her husband, and before impaling himself on the fence below, he insists that his suicide will be on Harper’s conscience, and because she wants a divorce, he’ll haunt her and never leave her alone. All of this is so poorly written it beggars belief: beyond melodrama or farce, the only way to describe the dialogue, and particularly the “big” scenes, in Men, is juvenile. This is writing that a 12-year-old film camp student could turn in and maybe get a “B.” Once Harper settles into her cottage, she’s besieged by evil, predatory, creepy, distrustful, and mean men, all played by Rory Kinnear. And to what end, exactly? Harper is stalked by a tree-man that looks like Shrek from a distance, and although he’s arrested for stalking early on, he’s released (“What can we charge him with?”), and he goes back to his tree layer where he communes with runes and puts leaves in his forehead.

COME ON! There aren’t even any good kills or interesting characters in Men—Jessie Buckley does what she can with a threadbare role and dozens upon dozens of shots where she just walks slowly with her mouth open, but besides the mail-slot kitchen knife stab, this movie has nothing to offer. And even that hand slicing gets overplayed. We don’t need to see that much of it for another 20 minutes! Men has so little going on intellectually: what is Garland scared of? Giving birth? Being caught for something we don’t know about? I’m reaching for psychological and perverted reasons for making this very bad and boring movie but coming up blank. Rarely have I seen a filmmaker fall so far between films; I didn’t love either Ex Machina or Annihilation, but they were leagues ahead of this embarrassing mess. This is something that you burn in two theaters on opposite coasts in December, not a movie you put in multiplexes. I wonder…gun to his head, could Alex Garland recognize a tampon?