The Moral and Intellectual Case for Avatar

Subtlety has its place, but so does the spectacle of popular art that’s also instructive. 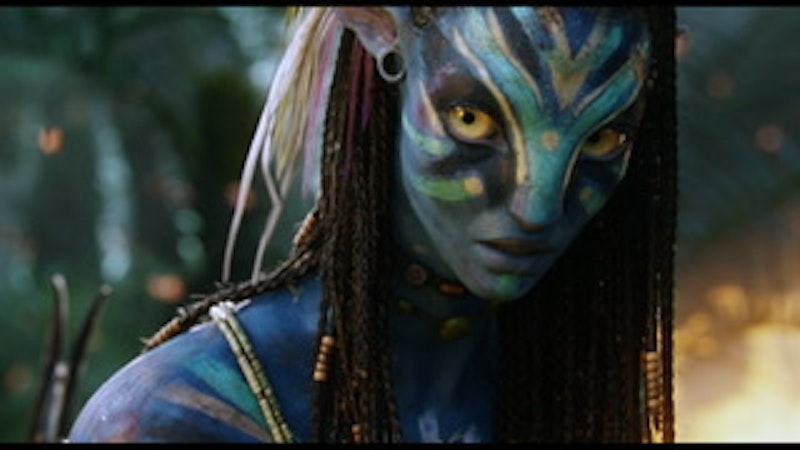 In college I had a professor, a relatively young and accomplished film scholar, who exhibited a level of erudition that my liberal arts state school otherwise lacked. I took whatever courses she’d teach throughout my four years, a general cinema studies course followed by ones focused on East Asian cinema, feminist cinema, sci-fi, and one devoted to propaganda and war machines. She shaped my understanding of art and was my first exposure to Marxism and gender theory. She took her role as educator seriously and I sought her approval.

She had quirks, among them an occasional lapse into snobbery. In the winter of my first semester she had a new favorite punching bag, a hotly anticipated mega-blockbuster from veteran hitmaker James Cameron. Avatar (2009) was what she’d use to draw a contrast between true, personal art and the slop pitched at the hogs. It rubbed me the wrong way. I had no interest in the film, but her crowing was a bit much. Cameron was the man who made Aliens and The Terminator—no Chantal Akerman, but not a purveyor of slop. This professor was also criticizing a film she hadn’t seen.

That changed, and to my surprise, so did her tune: she dismissed class one day newly humbled, sounding almost embarrassed when she quieted her tone, adjusted herself and recommended the film. Her phrasing was that it was “actually quite extraordinary.”

I didn’t see the same film. What I saw was too long and shamelessly derivative, obviously an outer-space retelling of Dances With Wolves, or, more accurately, the forgotten animated film Fergnully. Mind-boggling was the fact that Cameron, even in the pre-woke 2000s, would present such a by-the-book white savior narrative in which every member of the invaded alien race, the Na’vi, are played by persons of color with their hair in braids despite being blue, bipedal, feline-amphibian hybrids from another world. The 3D gave me a headache. It seemed so silly.

Yet it became the highest-grossing film of all time and kept that spot until just last year. It appealed to the hogs and my professor alike. Why? The former I suppose can be ascribed to timing and novelty—it was a new rollercoaster ride that everyone can ride over Christmas vacation—but what did my heroine see in this behemoth?

I decided to revisit it. Eleven years on I’m older and wiser, and happy to have my mind changed. Of interest, too, is how the film compares with modern blockbusters—the film that unseated it, Avengers: Endgame, was a decade-in-the-making culmination of a 22-film “cinematic universe,” the model that has taken over the business. We no longer have proper event cinema, let alone that of the madcap Cameron variety. Instead there’s the routine checking-in with a spate of related characters, movies that are interchangeable and updated at intervals to be nominally more diverse and pay lip service to of-the-moment sensitivities. Both on account of its scale and content, another Avatar would be anomalous and unfashionable today. So how bad and how problematic is it really?

Avatar rides a fine line between transcendant and stupid, brilliant and grotesque. The film remains the most impressive display of CGI. When it’s used more than sparingly, CGI almost always looks like shit, and Avatar rarely looks like a video game cutscene, which is saying something. The rotoscoping, while sometimes awkward, credibly telegraphs the nuances of the actors’ performances to an extent that hasn’t been seen before or since. There’s a heartbeat. And as action cinema it’s superior to every CGI free-for-all that has followed it. It’s ironic that in order to view this film, which not only fully embraced but also sought to expand the theater-going experience, you must settle for its shrunk-down version on Disney+ at a time when theaters may be on the way out of business. The MCU films, however, are right at home on the streaming services as they are in terms of quality and function no different than a bingeable series.

It’s a staggering vision—even if gaudy. While intelligently mounted there’s not a single image here I want to hold on to. The aesthetic is very desktop-background. The Na’vi are a chore to look at, and whether they reside in the uncanny valley varies greatly by character; Zoe Saldana’s Neytiri, the love interest, is seamlessly realized, whereas Sigourney Weaver’s avatar is the stuff of nightmares. If you’re going to create a new world from scratch with digital wizardry it should be more idiosyncratic. I’d rather look at a real jungle than Pandora.

As for its political correctness, Cameron’s presentation of the Na’vi is what’s most troubling. On the one hand, they’re undoubtedly an amalgamation of stereotypes of indigenous peoples, which is offensive and distractingly dumb. (Why would a being from another planet speak with an African accent?) Like so many science fiction films, Avatar is guilty of analogizing historical trauma without introducing a new perspective. The Na’vi are relegated to the sidelines, and what insights are gained from turning those peoples blue?

Mainstream cinema, though, has always processed such things through big, broad, obvious metaphors. Ideally such metaphors would serve as a device through which their authors argue points, rather than transpose oppressed groups or issues onto alien races or whatever else arbitrarily. Usually it’s little more than an intended shortcut to relevance and it can be trivializing and exploitative.

But white savior aside, Avatar has mostly flawless politics. Where it differs from the works of which it’s a derivative—the white man who ingratiates himself to an exoticized other, fucks the princess, and eventually becomes their savior—is that their John Smith characters come to redeem not just themselves but their nation/race. There’s invariably a bad-apple general or royal who’s done away with and written-off as an aberration and then everybody else sees the light. Implication: We’re a good people. We mean well but can be led astray. We don’t serve an inherently evil state.

Not so in Avatar. Jake Sully, the white American hero, goes beyond sympathizing, defects and permanently becomes one of the Na’vi. He renounces his humanness, whiteness and America.  The bad general is killed and every other earthling is sent packing, guided off the planet at gunpoint with their hands on their heads. Sully may be redeemed, but the colonizing superpower from which he hailed isn’t. It’s amazing to see such an enormous film indict the American empire so aggressively. Contrast that with Black Panther, whose villain is a black radical the hero crushes with the help of the CIA; Captain Marvel, which was made with the cooperation of the institution its girl-boss narrative backdoor-advertises, the Air Force; or every other Marvel movie that depicts an all-powerful state actor who answers to no one but with whom we’re meant to side because they have the right ideals. Avatar is the left-winger savaged for being insufficiently woke whereas Avengers: Endgame is the Democratic politician who firebombed a Yemeni daycare center but might pick Kamala Harris as their VP.

So perhaps my professor was years ahead of me. Subtlety has its place, but so does popular art that’s instructive and anguished and can engage a wide audience while loudly and clearly implicating them and their country. Like it or not Cameron is the first blockbuster director in a generation to ask us to look at ourselves and contend with the fire and death we so wantonly visit upon those an ocean, another galaxy, away.