The Man Who Wrote Citizen Kane

Herman Mankiewicz lived hard and fast, and spent the last years of his life fighting Orson Welles over Kane's authorship. 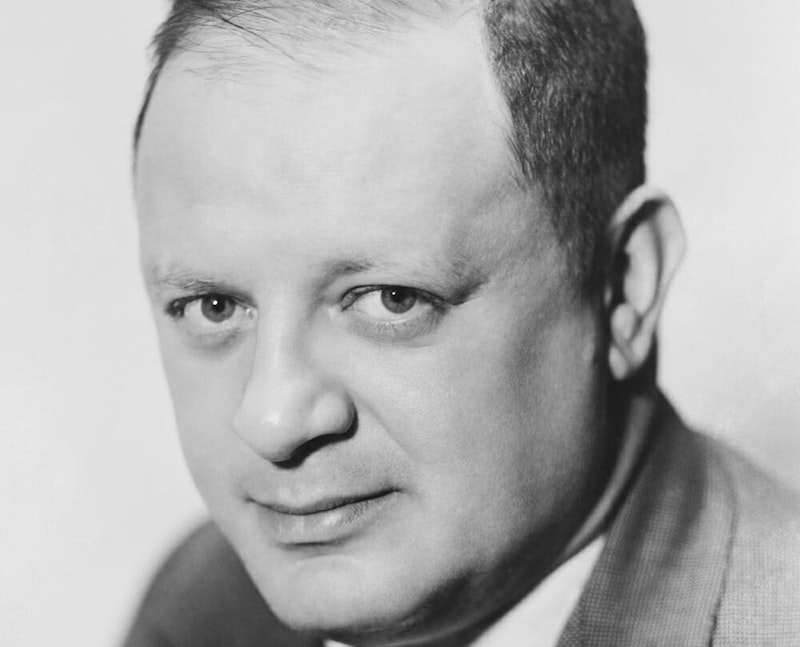 Herman Mankiewicz was a tough-talking, wisecracking screenwriter who despised sentimentality. When Warner Brothers insisted he write a Rin Tin Tin film, he submitted a treatment where the hero dog snatches a baby and tosses him into a raging house fire. The studio opted for another writer.

Born in New York City in 1897, Mankiewicz was a whiz kid. He graduated from Columbia University at 19, joined the Army and became a correspondent for the Chicago Tribune. He wrote for Vanity Fair and the Saturday Evening Post and was a theater critic for The New Yorker. He became a member of the Algonquin Round Table.

He moved to Hollywood in 1926 and was quickly hired as head of Paramount’s writing department. He wrote title cards for numerous silent films and then made the transition to talkies. His witty, crackling dialogue became the lingua franca of the era. He wrote a letter to his journalist friend Ben Hecht in New York. “Millions are to be grabbed out here and your only competition is idiots. Don’t let this get around.”

Mankiewicz wrote or rewrote nearly 60 produced screenplays including The Pride of the Yankees, Dinner at Eight, Duck Soup, The Front Page and Gentlemen Prefer Blondes. He was the first screenwriter to take a shot at the Wizard of Oz. He conceived “the Kansas sequence” and came up with the idea to film the Kansas scenes in black and white and the Oz scenes in color. He wasn’t credited for the work.

Mankiewicz gained notoriety for hard drinking and gambling. His reputation suffered as he often arrived late to studio meetings or not at all. Studio heads punished him by assigning him westerns or musicals, genres he despised.

In 1939, Mankiewicz was in a car accident in New Mexico. He broke his leg and was hospitalized. Orson Welles paid him a visit. Welles was working on an idea about an American cultural icon told from varying points of view. The story was initially based on Howard Hughes but Welles changed his mind realizing Hughes’ studio RKO would distribute the film.

Welles rented a cabin for Mankiewicz at the Kemper Campbell Ranch in Victorville, California. Welles hired his Mercury Productions collaborator John Houseman to “babysit” Mankiewicz. According to the book Citizen Kane: A Filmmaker’s Journey, Houseman unearthed secret stashes of alcohol inside the cabin. Mankiewicz was allowed one drink at night at the nearby Green Spot Bar.

Mankiewicz had a nurse and a secretary. He also had a rough treatment written by Welles called John Citizen, USA. The story was about a newspaper tycoon’s struggle for love leading to his destruction. The main character Charles Foster Kane was inspired by William Randolph Hearst, founder of the nation’s largest newspaper chain. Kane was portrayed as a self-absorbed, power-hungry megalomaniac. Hearst wouldn’t be happy.

Mankiewicz wrote the script while bedridden by dictating to his secretary. With Houseman serving as editor, they banged out a 325-page draft, enough for two scripts. Welles gave notes and suggested new scenes. Mankiewicz wrote seven drafts in all. After three months, they had a working script. RKO President George Schaefer came up with the famous title.

Citizen Kane is considered one of the greatest American movies ever made. Welles was paid $100,000. RKO promoted Welles as “a one man band, directing, acting and writing.” Welles told gossip columnist Louella Parsons, “I wrote Citizen Kane.”  Mankiewicz was furious. In a letter to his father, he wrote, “There isn’t a single line in the picture that wasn’t in writing from and by me before a camera ever turned.”

Mankiewicz threatened legal action. He wanted writing credit. Welles refused, per his contract. A feud ignited. Mankiewicz petitioned the Writers Guild that he was the original author. Welles offered Mankiewicz $10,000 if he let Welles take full credit. The Writers Guild settled on a joint credit, with Mankiewicz’s name first. Years later Welles claimed he’d planned on joint credit all along. He said of Mankiewicz, “God, if I hadn’t loved him I would have hated him after all those ridiculous stories, persuading people I was offering him money to have his name taken off.”

Citizen Kane was released on May 1, 1941. Initial box office was disappointing in large part by the refusal of Hearst newspapers to promote the film. Hearst also directed his columnists to write bad reviews. The non-Hearst press was effusive. Bosley Crowther of The New York Times wrote that the movie “comes close to being the most sensational film ever made in Hollywood.”

The film was nominated for nine Academy Awards, including Best Original Screenplay. Neither Mankiewicz nor Welles attended the event. Mankiewicz listened on radio at home as his name was called for Best Screenplay. The screaming of the crowd drowned out Welles’ name. According to Pauline Kael, “The academy felt good because their hearts had gone out to crazy, reckless Mank, their own resident loser-genius.”

Mankiewicz died in 1953 at the age of 55 from uremic poisoning due to his drinking. He and Welles hadn’t spoken in years. Welles acknowledged Mankiewicz’s contribution to Citizen Kane as “enormous.” He told Peter Bogdanovich in an interview, “Nobody was more miserable, more bitter and funnier than Mank. He was a perfect monument of self-destruction.”