I’m Sick of Disney Studios Making Me the Bad Guy

Quality villains: inconsequential as long as their films force us to be introspective? 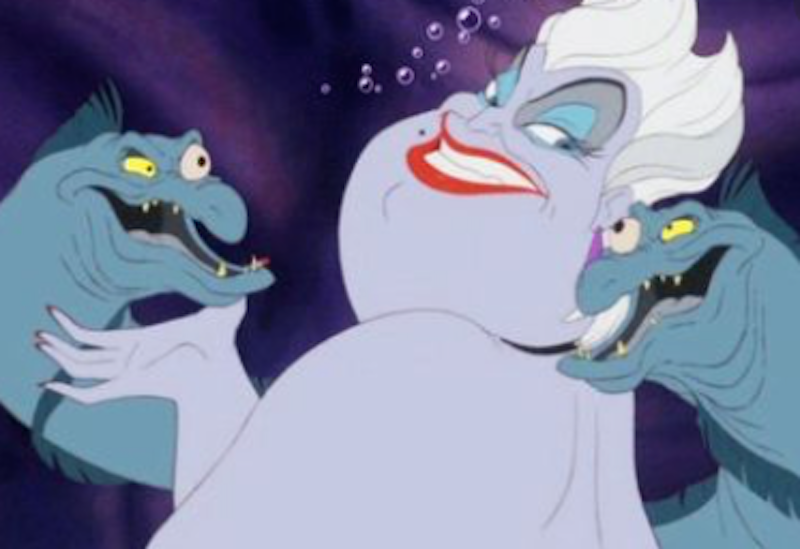 “Just show us the bad guy doing something bad so we don’t like him!”

When Mike Stoklasa stated this simple frustration about Star Wars Episode 1: The Phantom Menace, in the midst of delivering his absolutely legendary Plinkett Review of the film, it was a criticism of a storyline that was convoluted, and that had unnecessarily obscured its villain to the film’s own detriment.

Despite its link to the first of the Star Wars prequel films, Stoklasa’s utterance would be equally applicable to the latest spate of animated Disney films, which either conceal the true identity of the films’ villains, provide each villain with too generous of a redemptive outlet, or fail to produce a tangible villain altogether, instead hoping viewers will point introspective, accusatory fingers at themselves once the film makes them realize that they are the villains!

The uncomfortable truth is that Disney Animation Studios, in its clear objective of making many of its loyal viewers feel supreme guilt, hasn’t delivered a great and memorable villain to its fans in decades. Disney’s now in the business of making films that resonate socially, and men watching these new animated offerings should do so having been forewarned that they’ve been drafted into villainy without consent.

Disney villains of the 20th century knew how to be evil. They reveled in their appreciation for the depths their malevolence could plumb. Gone are the days of Ursula the Sea Witch openly duping Ariel the mermaid out of her voice and letting the entire audience in on the scheme (“Flotsam, Jetsam… now I’ve got her, boys!”). Rarely do we get to observe characters like Cruella DeVille and Edgar Balthazar devoting hours to arranging the kidnapping and murders of puppies and kittens, respectively. Nor will we get to see Shere Khan, Captain Hook or Queen Grimhilde announce their intent to slay the heroes in their films, while exhausting every effort to effectuate the executions.

Sometime around 2014 is when Disney officially lost its nerve, although signs that the company had strayed from providing villainy with a suitable representation were beginning to show themselves in subtle ways. Wreck It Ralph delivered one of the greatest reveals of a surreptitious villain in cinematic history, when Vanellope von Schweetz’s fortuitous race-day glitching exposed that King Candy of Sugar Rush was really the fanatical racer, Turbo, who’d hijacked the gaming console for his own aggrandizement. At least in that instance, we were led to believe there was something crooked about King Candy for a considerable chunk of the film’s running time, so his reveal as gaming’s most extreme egotist was icing on the cake.

By comparison, in 2013’s Frozen, the self-confession of Prince Hans’ villainy is stilted and unconvincing. This is because Hans hadn’t actually caused any of the chaotic elements of the film; he simply didn’t want to help resolve any of the problematic issues and hoped to claim the throne of Arendelle for himself. In the moment that he chose to expose himself as evil, his smartest play would probably have been to wed Princess Anna while Elsa had run off, thereby marrying into the position as Arendelle’s foremost leader. Clearly, Hans became the chief malefactor in that moment because the plot needed a man to be a deceitful villain so that a sister’s love could save the day. The film gets style points for circumventing the archetype of the heroic prince, but the moment was forced nonetheless.

Next for Walt Disney Animation Studios was Big Hero 6, in which the unnamed masked villain—known as “Yokai”—terrorizes San Fransokyo after an explosion appears to have claimed the life of Hiro’s brother, Tadashi, along with the life of Robert Callaghan, the head of the San Fransokyo Institute of Technology. Shockingly, Callaghan is revealed to be the masked villain more than two-thirds through the film, but any wind is drained from Callaghan’s villainous sails once we learn that his motivation is to take revenge on the brazenly slimy Alistair Krei, who was responsible for the ostensible death of Callaghan’s daughter, Abigail.

I understand that villains with believable motivations can be engaging, but it’s often more enjoyable to listen as evildoers articulate their felonious motivations aloud, and then watch as those schemes progress naturally throughout the film. This was handled masterfully by the character of the Joker in The Dark Knight, because viewers were permitted to spend time with the Joker, to understand his character, his motivations, and the scope of the threat he posed. Instead of following this model, Disney Studios has attempted to turn nearly all of its modern films into The Usual Suspects.

Speaking of Keyser Söze, Zootopia took its turn as Disney’s conduit for the unveiling of a mystery villain in 2016. First, the film distracted us with a story about a bullied and underestimated bunny cop, baked that storylne into a larger theme about prejudicial behaviors, and then presented a secret criminal mastermind in the form of the diminutive sheep, Assistant Mayor Bellwether. The figurative wolf in a literal sheep’s clothing had preyed on common stereotypes of historical predators in a gambit to seize Zootopia’s top political office. Bellwether is unmasked as the feature’s chief villain a mere eight minutes before the commencement of Shakira’s film-closing musical number.

Later in the year, Moana regressed things even further, providing us with the first of three consecutive Disney Studios films without any true villain for the heroes to combat. With the help of the sentient ocean, Moana of Motonui sets out to restore the heart of Tefiti—which was stolen years ago by the demigod, Maui—to whatever remains of the once vibrant island goddess, and to replenish the luster of the Pacific Islands. To accomplish this task, Moana coerces Maui into teaching her how to sail, or “wayfind,” bails the demigod out of trouble when he’s about to be gobbled up by Tamatoa, the shiny giant crab, and then almost single-handedly outmaneuvers Te Kā, the volcanic demon. Only after doing all of this does Moana discover that Te Kā is Tefiti, who was turned into a monster when Maui stole her literal heart from her.

So, if we’re playing it straight, the real villain of Moana is actually Maui, the male demigod who stole the heart of a goddess against her will and turned her into a shell of her former self. Yet, Maui is also easily the most likeable character in the film, so no one watching the film would want to actively dislike him. However, while Moana executes the mission that results in the return of Tefiti’s heart, Maui contributes very little of value to the cause, and demonstrates himself to be cowardly and ineffectual in key moments.

Meanwhile, Moana proves herself to be an entirely self-made heroine, performing all of the mission’s heavy lifting and proving all of her exclusively male doubters wrong, primarily Maui and her father. Once again, Disney delivered a thematic message, but had failed to devote any cinematic effort to developing and fleshing out the motivations of a true villain over the length of a nearly two-hour feature film. Apparently, Disney feels quality villains are inconsequential as long as their films force us to be introspective.

The “villainless” train of introspection continued in Ralph Breaks the Internet, the 2018 sequel to Wreck It Ralph. Bursting with excitement to have a best friend in the form of Vanellope von Schweetz, the hamfisted Ralph wrecks almost everything he touches in his obsessive attempts to please his best friend, and in his unwieldy efforts to correct his massive mistakes. In the process, Ralph temporarily and unintentionally reassumes the role of supervillain as he thwarts Vanellope’s efforts to branch out and make her own decisions. In the process, he injects a deadly computer virus into the game Vanellope wishes to join, causing it to glitch out and become unstable.

After Ralph’s treachery is discovered, the same virus that crashed the game also magnifies Ralph’s insecurities and creates villainous copies of Ralph that are obsessed with physically owning Vanellope. The problem is only resolved when Ralph overcomes his own insecurities, which causes the Ralph clones to dematerialize. Once again, there’s no true villain in the film, aside from Ralph and his insecurities.

Speaking of insecurities, Disney is beginning to make me feel insecure. After all, Ralph Breaks the Internet was the second film in a row from Disney Animated Studios that appeared to be a symbolic reenactment that caricatures the unjust or abusive treatment of women by men. I’m a big fan of self-reflection, but is there any reason why there couldn’t have been a true villain who ultimately benefited from the misguided behaviors of Maui and Ralph, or would that have distracted from the goal of framing entire categories of real-world people as miscreants?

Finally, we arrive at Frozen 2, through which Disney once again delivered what was essentially villain-free fare. The natural disturbances threatening the kingdom of Arendelle aren’t the result of any evil plot hatched from the mind of a supervillain in control of the forces of nature. Instead, they’re the result of a curse brought about by King Runeard, the grandfather of princesses Ana and Elsa. Runeard’s act of betraying the Northuldra natives through the building of a dam had produced what amounted to a generational curse that could only be corrected through acknowledgement of the long-forgotten misdeed, and the destruction of the dam itself.

Once again, the revelation of King Runeard as the film’s “villain” doesn’t occur until the film nears its conclusion. For almost the entire viewing, the heroines found themselves fighting against the outworking of a half-baked scheme sprung from the mind of a long-dead relative who wasn’t even present within the film’s narrative to receive his comeuppance. Granted, some of the worst Disney villains, like Honest John and The Coachman from Pinocchio, never received any form of retribution, but at least they were physically present in the film to have a direct link made between their shady dealings and the hero’s troubles.

I’m in favor of the weaponization of films to present social messages, but the modern Disney rogues gallery consists primarily of underdeveloped villains that are stand-ins for men who’ve stifled the progression of women (Ralph), illicitly stolen the hearts of women (Maui), deceived women (Hans), or brought generational guilt to their descendants by duping unwitting native populations (Runeard). Quality villains are collateral damage in Disney’s apparent war on men.

I’m getting exhausted from being the ostensible bad guy in so many of these films. For the first time in a long time, I’d relish an opportunity to watch a Disney bad guy doing bad things so that I don’t like him, without being asked to hate myself in the process.