Synthesizers of Future Past

Giorgio Moroder's Metropolis score retells a future that’s already in the past. 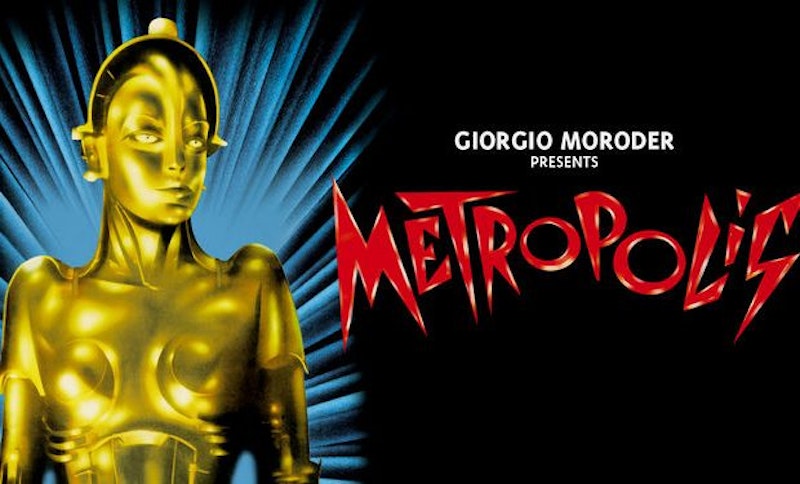 There’s no denying that Fritz Lang’s Metropolis is one of the most seminal films of its own medium. Anybody who wants to understand filmmaking should look at the 1927 silent film about a man whose father builds a dystopian city rife with class struggles, as a guide to how the camera moves, block your actors and achieve a granular vision through utilizing these means. As it draws from Cubist and Bauhaus styles, it brings an out-of-this-world setting that no other film, even today, could possibly match, and you can see its influence in not just science fiction, but pop culture at large, from music videos to graphic novels.

However Metropolis wasn’t a complete film and had many restorations since its original cut was lost. There isn’t a clear reason as to why that’s the case—the content was either too brutal or too long, according to The Guardian’s Peter Bradshaw. But over time, much of its footage has been rediscovered, with some prints destroyed subsequent to re-editing.

Perhaps the most controversial version was the Giorgio Moroder reinterpretation, whose soundtrack replaced Gottfried Huppertz’s orchestral score. It was the first serious attempt to restore the original version and was the most complete around that time, at least until the 2010 restoration. It was remarkably short, clocking in at 83 minutes, compared to the original’s 144 minutes. Largely tinted in color, it prominently arranged a soundtrack consisting of new wave and pop, featuring Freddie Mercury, Jon Benatar and Bonnie Tyler.

Giorgio Moroder was not the first person to compose an electronic score to the film—William Fitzwater and Hugh Davies did in 1974 for the BBC. But Moroder was one of the hottest producers of pop music during this decade, behind movie soundtracks like Scarface, American Gigolo and Top Gun, whose tracks are instantly recognizable for their pulsating rhythms and catchy songs. Moroder was a good fit to compose a new score. The Moroder cut, which you can find at Kino Lorber, is ostensibly a jukebox of sorts, where tracks are cut and pasted throughout its entirety.

Predictably, a reiteration would inspire scorn from cinema purists, who believe that it insults the original version by making a relic that can only be inflected through the 1980s. But this presumes two false assumptions. First that Moroder’s version was the only reiteration/version (since Moroder, there have been many, with a complete version in 2010 for Kino Lorber), so it’s possible he can salvage any sacrilege the original had. The second assumption is that it would remake the movie under his own image instead of Fritz Lang. This ignores the fact that a reinterpretation is simply a remix of an original work, and a watchable one at that, in spite of the musical choices it makes.

Rather than relentlessly modernizing it for the audience at the time, the restoration is candy-colored with hues either in bright cyans, sepias, blues or yellow, enhancing the mysterious grandeur of its setting. While the film’s length is cut in half, it doesn’t stray from what made the film crucial. However there are several sequences cut that reduces the film’s attention to detail. One sequence that was cut was Maria escaping from Rotwang the inventor, who uses her to build a resemblance to Hels, Freder’s lost mother who the man loved. It loses the elaboration of the setting that holds the character, built in with trap doors and befuzzling corridors, reducing the detail of Rotwang’s villainy.

A political subtext, critics have retrospectively observed in Moroder’s version, is that its atmosphere from the Reagan era contradicts the worker philosophy. In an article written in The Quietus bemoans that the messaging was banal, but also “comically queasy,” pointing the finger to Ayn Rand’s anti-union paternalism that possibly marred the film. The aesthetic does recall what was fashionable around the time, and the possibly bloated materialism that paints the music tends to distract from Metropolis’ larger themes, such as class, urban decay and technological innovation.

There are musical highlights in this reinterpretation that tend to demonstrate its mere functions, rather than expound any of its components. “Here’s My Heart,” performed by Pat Banatar is sung when Freder, the son of the city’s master Joh Frederson meets Maria, the workers’ insurrectionist leader, for the first time, reincorporating a typically romantic cheese. “Cage of Freedom” from Jon Anderson is played when the inventor’s son witnesses an industrial rupture, which would cause a disruption to the Metropolis’ centrepiece, the Tower of Babel.

Some of the soundtrack choices don’t fit seamlessly. One example is the Freddie Mercury track “Love Kills,” which plays at the beginning of Metropolis, and is a showcase of the performer, rather than how it integrates with the narrative. What relevance do the lyrics play to anything with the film, besides pandering to the audience. Moroder’s pumping synths don't add any tension in its accompanying sequences, whether it’s Maria’s doppelganger bringing men to gawk at her or the workers revolting, following its factory’s destruction.

Moroder’s Metropolis approximately retells a future that’s already in the past. His Metropolis is not merely an interpretation, but rather a reflection of the movies being influenced by it, and a time capsule that reflects the Reagan/Thatcher era, colluding with MTV. From Blade Runner to Tim Burton’s Batman and Pink Floyd’s The Wall, the list is endless. It’s an interesting experiment that, if nothing else, predates all the fan AMVs that you’ll sometimes find on YouTube. That’s not to say Moroder lacked any passion for it, given that the time for it makes more sense and that he came first in resurrecting it. It’s a curiosity for anyone who has seen Metropolis and Moroder as a composer.