The rape of Iraq runs through The Card Counter, the coolest-looking movie in theaters right now. 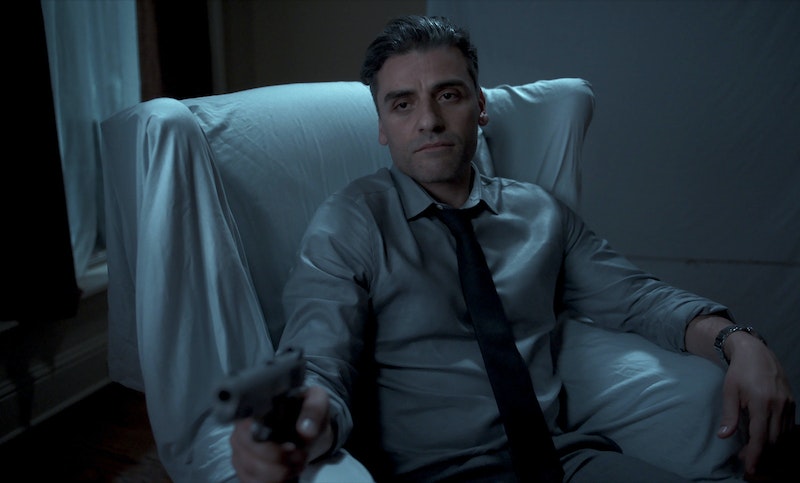 The Card Counter begins with the coolest opening credits sequence of the last couple of years: an extreme close-up of the neat stitching of a poker table, with a down-tuned distorted guitar droning on two notes, beginning with, “FOCUS FEATURES and MARTIN SCORSESE present a film by PAUL SCHRADER,” and so on. After the final card, we fade into a game in progress, hands in motion. A perfect beginning that communicates so much more than a night skyline, or a close-up of Oscar Isaac looking tortured. He’s very good as William Tell, Schrader’s latest basket case so leaden with guilt he’s already sinking into death.

Almost all of the press coverage and a lot of the word of mouth about this movie—at least among people familiar with Schrader’s work and First Reformed, his previous film—mentions Robert Bresson. Schrader ripped off the ending of Bresson’s Pickpocket again, but this time, it’s scored to a horrendous second wave epiphany core song, reeking of Arcade Fire and The National. It’s unfortunate because the rest of the music and the sound design in this movie is great, but that fucking song at the end.

Besides the ending, there’s the “man in the room”’s origins in Bresson’s Diary of a Country Priest, but so what? The influence and distinctive tics and certain obsessions are there—hands, money, God—but this isn’t a “Bresson riff.” First Reformed was a riff: Ingmar Bergman’s Winter Light plus Diary of a Country Priest, with some of Ordet and The Sacrifice thrown in. It still worked as a movie, and played great in the summer of 2018 when it was a commercial art house favorite; of course Ethan Hawke was snubbed by the Academy.

The only direct pull in The Card Counter is the Pickpocket ending, but once again, it works on its own. But this is very much a continuation of First Reformed, and Schrader’s 1991 Light Sleeper, one of the only other films explicitly referenced: Tell has lyrics from one of Michael Been’s songs tattooed on his back, and once again, we’re stuck with a man who locks himself away from the world, morally ambivalent and guilt-ridden to the point of dysfunction, or in Tell’s case total order: a veteran involved in Abu Ghraib, he did eight years at Leavenworth before being released with no purpose, no goals, no reason or justification to live anymore. So he started playing poker—professionally. An expert card shark from his time inside, Tell travels the country visiting casino and winning just enough to cash out and not worry the house. “You can’t beat the house.”

Tell travels light and wraps every room he occupies in white linen and twine, a striking visual gesture and another Schrader loner tic that could’ve appeared in Taxi Driver, Light Sleeper, or First Reformed. Once again, he drinks and writes in his diary at night. Twice we’re sent back to Abu Ghraib via distorted wide angle lenses that resemble backup cameras in cars. As Tell and his superior John Gordo (Willem Dafoe) walk the filthy, fluid stained floors of the torture chambers, blasting speed metal all the way, The Card Counter briefly becomes the most brutal movie you can see in any theater right now. Even though we’re only sent back twice, Tell’s motivations and lifestyle aren’t hard to understand. Far from it: it’s remarkable he hasn’t already eaten a gun.

The Abu Ghraib sequences are more horrifying and immediate than any of the climate fatalism of First Reformed, a movie I only found chilling for its shot of the husband with his brains blown out in the snow only a few scenes after he poured his heart out to Ethan Hawke’s country priest. Tidal waves still sound like The Day After Tomorrow to me. But Abu Ghraib, another 2004 phenomenon, still sears and feels nearer than ever with our belated withdrawal from Afghanistan and the anniversary of 9/11. The American public couldn’t vote on either the Afghanistan or Iraq War, and we’re not implicated in the games of world’s masters. But our artificially inflated standard of living is paid for by those games. Tell’s direct participation in the rape of Iraq is why he can’t bear to do anything else but make enough money to live comfortably and live an anonymous life in sterile, inhuman environments, already half dead.

What a great surprise for people looking to see a cool card shark movie on a late-summer weekend. I was really excited to see Tiffany Haddish in a Schrader movie, but besides her two entrance shots—a wide and a medium of her sitting beside a poker game wearing black sunglasses with turquoise rims—her performance is inert. It’s not for lack of trying or ability, and after reading about how Schrader had to strip Haddish of “any emotion” in her delivery and get rid of a “sing-songy” cadence common to comedy, it’s clear that the problem is the way the character, La Linda, is written.

La Linda just doesn’t feature into Tell’s story, at least not as much as Tye Sheridan, who shows up in my personal favorite performance of his so far, yet another disturbed, possibly murderous and psychopathic adolescent/young man with daddy issues. He finds Tell at a talk that Gordo’s giving. They exchange numbers, and Sheridan’s Cirk (pronounced “Kirk”) fills him in: dad was a vet under Gordo’s command, he came home insane, beat him and his mom, his mom fled, then he killed himself and now Cirk wants revenge. After some trepidation, Tell takes on a partner, who lives like a pig (they exchange mutual “You live like this?” responses when they see each other’s hotel rooms).

Dafoe doesn’t have much screen time, and he flew in the performance of the mustachioed, Stan Lee-esque torture master, but he’s got plenty to work with. Tell has no interest in going professional at first, so his relationship with La Linda remains platonic, but even after he agrees to enter the world championship in Las Vegas, she remains a practical non-participant—until they have sex, and only here is La Linda doing anything other than standing around watching Tell play poker, occasionally, which becomes less frequent as the Gordo obsession ratchets up and especially after Cirk does some dumb shit that leads to the wild climax of the movie, which you could say pulls from the shot in Taxi Driver where the camera moves away because it can’t take how pathetic Travis Bickle sounds over the phone.

Enough nerd shit: The Card Counter is the coolest-looking movie in theaters right now and it’s full of real dread, horror that doesn’t go away once the lights go up.